It’s a luxury to be able to access a modern machine shop, complete with its array of lathes, mills, and presses. These tools are expensive though, and take up a lot of space, so if you want to be able to machine hard or thick metals without an incredible amount of overhead you’ll need a different solution. Luckily you can bypass the machines in some situations and use electricity to do the machining directly.

This project makes use of a process known as electrochemical machining and works on the principle that electricity passed through an electrolyte solution will erode the metal that it comes in contact with. With a well-designed setup, this can be used to precisely machine metal in various ways. For [bob]’s use this was pretty straightforward, since he needed to enlarge an existing hole in a piece of plate steel, so he forced electrolyte through this hole while applying around half an amp of current in order to make this precise “cut” in the metal, avoiding the use of an expensive drill press.

There are some downsides to the use of this process as [bob] notes in his build, namely that any piece of the working material that comes in contact with the electrolyte will be eroded to some extent. This can be mitigated with good design but can easily become impractical. It’s still a good way to avoid the expense of some expensive machining equipment, though, and similar processes can be used for other types of machine work as well.

Plenty of projects we see here could easily be purchased in some form or other. Robot arms, home automation, drones, and even some software can all be had with a quick internet search, to be sure. But there’s no fun in simply buying something when it can be built instead. The same goes for tools as well, and this homemade drill press from [ericinventor] shows that it’s not only possible to build your own tools rather than buy them, but often it’s cheaper as well.

This mini drill press has every feature we could think of needing in a tool like this. It uses off-the-shelf components including the motor and linear bearing carriage (which was actually salvaged from the Z-axis of a CNC machine). The chassis was built from stock aluminum and bolted together, making sure to keep everything square so that the drill press is as precise as possible. The movement is controlled from a set of 3D printed gears which are turned by hand.

The drill press is capable of drilling holes in most materials, including metal, and although small it would be great for precision work. [ericinventor] notes that it’s not necessary to use a separate motor, and that it’s possible to use this build with a Dremel tool if one is already available to you. Either way, it’s a handy tool to have around the shop, and with only a few modifications it might be usable as a mill as well.

END_OF_DOCUMENT_TOKEN_TO_BE_REPLACED 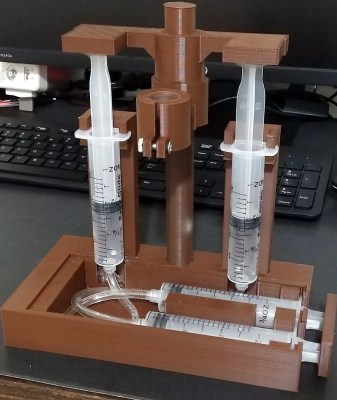 END_OF_DOCUMENT_TOKEN_TO_BE_REPLACED

Getting a perfect workshop together, with all the right tools, is a dream for many. A lot of us cobble together what we can with a dremel tool, a soldering iron, and whatever work surface happens to be available in the kitchen or spare bedroom. But even when we finally get a permanent garage or shop to work in, there are still some challenges to overcome with our workspaces. [Workshop From Scratch] was having issues with his drill press, and solved them with this custom build.

Rather than modify an existing press, he first welded a table together from scratch using square tube. From there he set about solving those issues. The first was having to make a large number of adjustments up and down when working on larger pieces. For that he added an electrically adjustable worktop which keeps him from having to make constant adjustments of the press itself. The second improvement over the standard press workspace was adding a cooling system for the cutting tools, saving himself money in bits and allowing quicker drilling.

The finished product looks professional thanks to a quality paint job and, of course, having all the right tools in the workshop in the first place to put something like this together. We all have an idea in our heads about the perfect workshop for our own needs, but don’t forget to think outside the box when it comes to building one yourself.

END_OF_DOCUMENT_TOKEN_TO_BE_REPLACED

Mills are a huge investment, and for hobbyists without the space to install their own personal mill, it can sometimes be a pain to have to find a facility with a mill to complete your project.

What if you could convert your drill press into a mill instead? YouTuber [Small Metalworking Machines] explores this in his video, where he takes a small Central Machinery drill press and adds a few mods. He took some steps to improve the quill, spindle, and bearings — boring down the quill, replacing the bearings, and finally turning and re-threading the spindle it at 1/2-20.

With the adjustments, he was able to add in a cheap drill chuck, which fit in quite nicely with just a slight wobble of 5 thousandths on either side. To introduce some control, he added in a worm gear to engage a gear on the spindle. A pivot point disengages the worm gear, while bearings provide it controlled movement from the worm wheel.

He also added a cheap milling table from eBay, attached to the base of the drill press, all for a total of $120. While it’s not perfect, it’s still significantly less expensive than buying a mill!

END_OF_DOCUMENT_TOKEN_TO_BE_REPLACED

We are lucky to live in an age when tools have almost never been so affordable, when if we’d like a drill press on our benches we can pick one up for not a lot from our nearest discount store. If the cheapest tools aren’t very good quality then even the better ones aren’t that much more expensive. It’s evident that [Workshop DIY] has the resources to buy a decent drill press if he wanted one, but we’re fortunate that instead he’s taken the time to build one of his own from scratch (Russian language audio, Anglophones will have to enable YouTube subtitle translation).

The press itself is made entirely from box section steel tube, with what looks like 25mm square used for the base and 50mm for the vertical shaft. Instead of a rack and pinion to raise and lower the tool it has a slider that runs on a set of bearings and is lifted with a bicycle chain. The chuck itself is mounted to a shaft that runs through another set of bearings to the large pulley and motor from a washing machine. The result is a beautifully made drill press that seems to work very effectively. It may lack an adjustable table or selectable speeds, but we certainly couldn’t build it better than he has. Take a look, the video is below the break.

It shouldn’t be surprising what can be made in a well-appointed metalworking shop, perhaps we have been blinded by the convenience of readily available tools. If you’d like to see more, take a look at this DIY engine crane.