But we think the scratch built wristwatch case recently shown off by [Colin Merkel] adds a new justification for wearing a watch: pride. From a chunk of steel rod stock, [Colin] walks through every step of the process to creating a professional looking watch case. This is actually his second attempt at the project; while his first one certainly didn’t look bad, he felt that he learned enough from his earlier mistakes that it was worth starting over from scratch. A man after our own heart, to be sure. 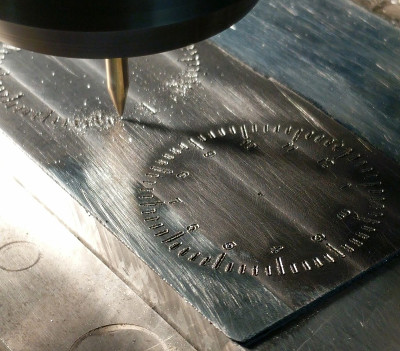 As you might imagine, construction of the watch is largely done on a lathe. [Colin] turns down the steel stock to create the case and case back, and eventually moves on to using a mill and grinder to cut out the strap arms.

Perhaps the most interesting part of the build is the watch face itself. [Colin] uses a CNC to cut the marks into the dial, and after several iterations settled on a very classic looking layout. He then blues the dial by placing it in a bed of aluminum chips and heating it with a torch, creating a thin layer of iron oxide on the surface. This blued surface not only looks beautiful, but will protect the surface against corrosion. Finally, the marks themselves are brightened up by an application of white nail polish.

The watch purists (don’t worry, they are out there) will no doubt cry foul to see that [Colin] used an off-the-shelf Epson Y121E watch movement instead of trying to build his own. This if of course a bit like the classic Arduino argument; when there is already a perfected platform for you to build off of, why reinvent (literally) the wheel?

But if you insist, we’ve also covered somebody who took up the challenge of building his own movement. We also have no shortage of digital watch hacks, many of which even forgo those pesky little numbers.