The only one of the vehicles planned to succeed the V-2 (at this point still known by its development name, A-4) which actually got built was the A-4b. As this design was a direct evolution of the already deployed A-4/V-2, it was allowed to progress much farther than if it had been a completely new vehicle. In fact, a few test flights were even performed, though none completely successful.

To put it simply, the A-4b was a V-2 rocket modified with swept-back wings. The wings allowed the rocket to generate lift when it reentered Earth’s atmosphere, thereby extending the operational range. It was believed that adding wings to the V-2 would have more than doubled its range without a major redesign of the vehicle and production lines. As Germany was pushed farther and farther back by the advancing Allies, this would have allowed them to continue launching attacks into Britain for much longer than otherwise would have been possible.

Test flights of V-2s modified to the A-4b configuration were flying as late as four months before Germany surrendered to the allies, giving some indication of how badly they wanted to see this version brought into service.

The team at Peenemünde understood early on that a single-stage rocket would never get more than a few hundred miles with the technology available to them. There was simply too much dead weight being dragged along with the rocket as it traveled farther and farther downrange. If Germany ever hoped to strike the mainland US from European launch sites, they’d need a multistage vehicle that could shed off the dead weight as it continued on its journey. The vehicle was accordingly referred to as “Amerika Rakete”.

Interestingly, the stages of this proposed rocket were to be treated as two distinct vehicles. The first stage booster, the A-10, would have essentially been a super-sized V-2 burning diesel and nitric acid. The A-9 second stage would have been an evolved version of the A-4b, but manned as it was believed that the technology to automatically guide the first stage accurately over such great distances simply wasn’t feasible.

Contrary to popular belief, there has never been any indication that the A-9/A-10 was intended as a suicide weapon; the pilot was likely meant to eject once the A-9 was set on course for impact. Had the A-9/A-10 flown (a first test flight was planned for 1946), its pilot could have potentially beaten Yuri Gagarin to be the first human in space by 15 years.

Building on the A-9/A-10 program, an additional two stages were planned. With all four stages combined into one stack, the final A-12 configuration would have been a true orbital-class vehicle. Less than 1/3rd as tall as the Apollo-era Saturn V that would eventually take mankind to the Moon, but with 50 engines firing on the first stage, it would have been something to behold on liftoff.

Assuming, of course, that it was actually a real thing. Some historians doubt that the A-11/A-12 were ever formally considered, and maintain that it was more likely a dream project of Wernher von Braun’s. No official wartime information about the A-11/A-12 has ever been provided, and as far as anyone can tell, the first mention of it was when von Braun was already in the United States and pitching ideas to the Air Force. 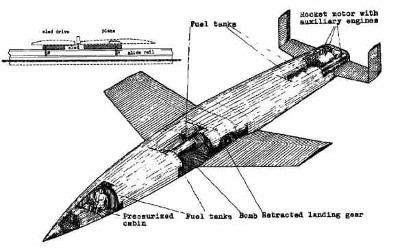 Wernher von Braun and the team at Peenemünde weren’t the only ones in Germany working on advanced rocket vehicles. Eugen Sänger came up with a spaceplane he called the “Silbervogel” (Silver Bird, in English): a sub-orbital bomber which could take off in Germany, bomb the mainland United States, and then land in Japan. The key to the Silver Bird’s theoretical range was its advanced lifting-body design, which would allow the craft to “bounce” off of the Earth’s atmosphere. Each time it rebounded off the atmosphere and traveled back up into space, it would extend its range farther.

The Silver Bird’s lifting body design was decades ahead of its time, and despite some promising work on the propulsion system, the vehicle never got off the drawing board. However, the ideas pioneered by Sänger would eventually find practical application in various test programs of the Air Force and NASA, which ultimately led to the development of the Space Shuttle.

It’s safe to say that no country enters into war planning to lose, and Germany was no different. While these vehicles were all developed during war, their designers envisioned a time in the future when similar craft would embark on missions of peace. In 1944, Wernher von Braun was even arrested on a charge of sabotage, as he was overheard telling a colleague that his true goal with the A-4 project was not to develop a weapon, but make space travel possible.

In his book, V-2, Walter Dornberger mentions some of the fantastic ideas he and his team bounced back and forth at Peenemünde:

With our big rocket motors and step rockets we could build space ships which would circle the Earth like moons at the height of 300 miles and at a speed of 18,000 miles per hour. Space Stations and glass spheres containing the embalmed bodies of pioneers of rocket development and space travel could be put into permanent orbits around the Earth. An expedition to the Moon was a popular topic too. Then we dreamed of atomic energy, which would at last give us the necessary drive for flight into the infinity of space, to the very stars.

Modern material science and computer simulations tell us these incredible designs had little chance of working in the real world. The engineers at the time simply didn’t have the knowledge necessary to fully understand the challenges of manned spaceflight.

For starters, a close examination of these vehicles show dry weights (the weight of the craft with no propellant on board) that are beyond the technology of the time; it would be decades before the lightweight alloys and composite materials required would be available. Heat shields capable of withstanding the fury of reentry into the Earth’s atmosphere aren’t even mentioned in the designs of these vehicles, betraying an ignorance to one of the most challenging aspects of developing an orbital vehicle.

With time, these challenges would have become clear to the engineers working on these projects. It’s possible they would have even solved some of them. But time is not something Germany had on their side, and the end of World War II also marked the end of Germany’s space program. It would take until 1978 before a German citizen reached space aboard a Soviet rocket, and to this day, no orbital rocket has ever launched from German soil.

88 thoughts on “The German Space Program That Never Was”