Early computers ran so slowly that cache really didn’t matter. Core memory was plenty fast when CPU speed was measured in kHz. The first data cache was used in the IBM System/360 Model 85, released in 1968. IBM’s documentation claimed memory operations would take ¼ to ⅓ less time compared to a system without data cache.

Now the obvious question is if cache is faster, why not make all memory out of cache? There are two answers to that. First, cache is more expensive than main memory. Generally, cache is built with static ram, which is much more expensive than the dynamic ram used in main memory. The second answer is location, location, location. With processors running at several GHz, cache now needs to be on the same piece of silicon with the processor itself. Sending the signals out over PCB traces would take too long.

The CPU core generally doesn’t know or care about the cache. All the housekeeping and cache management is handled by the Memory Management Unit (MMU) or cache controller. These are complex logic systems that need to operate quickly to keep the CPU loaded with data and instructions. 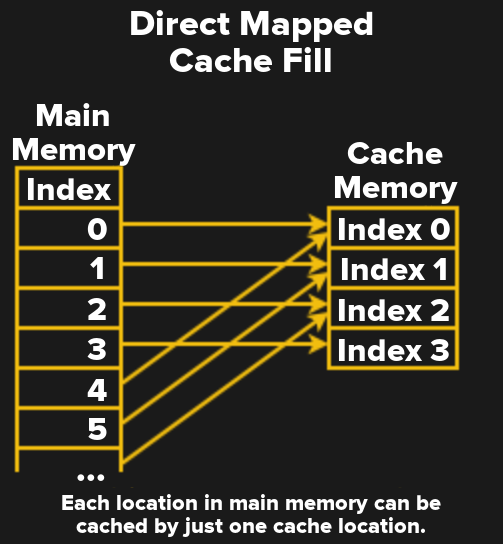 The simplest form of a cache is called direct mapped cache. Direct mapped means that every memory location maps to just one cache location. In the diagram, there are 4 cache slots.This means that Cache index 0 might hold memory index 0,4,8 and so on. Since one cache block can hold any one of multiple memory locations, the cache controller needs a way to know which memory is actually in the cache. To handle this, every cache block has a tag, which holds the upper bits of the memory address currently stored in the cache.

So far I’ve covered read accesses using cache, but what about writes? The cache controller needs to be sure that any changes made to memory in the cache are also made in RAM before the cache gets overwritten by some new memory access. There are two basic ways to do this. First is to write memory every time the cache is written. This is called write-through cache. Write-through is safe but comes with a speed penalty. Reads are fast but writes happen at the slower speed of main memory. The more popular system is called write-back cache. In a write-back system, changes are stored in the cache until that cache location is about to be overwritten. The cache controller needs to know if this has happened, so one more bit called the dirty bit is added to the cache.

Cache data needs all this housekeeping data — the tag, the valid bit, the dirty bit — stored in high-speed cache memory, which increases the overall cost of the cache system. 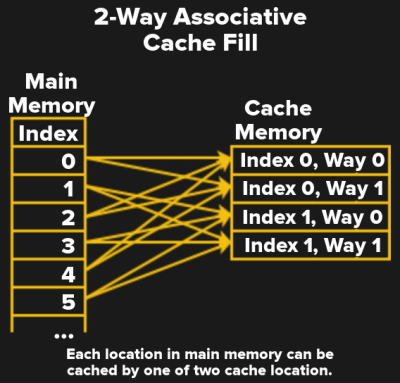 A direct mapped cache will speed up memory accesses, but the one-to-one mapping of memory to cache is relatively inefficient. It is much more efficient to allow data and instructions to be stored in more than one location.

In the beginning, computers ran one program at a time. A programmer had access to the entire memory of the system and had to manage how that memory was utilized. If his or her program was larger than the entire RAM space of the system, it would be up to the programmer to swap sections in or out as needed. Imagine having to check if printf() is loaded into memory every time you want to print something.

Virtual memory is the way an operating system works directly with the processor MMU to deal with this. Main Memory is broken up into pages. Each page is swapped in as it is needed. With cheap memory these days, we don’t have to worry as much about swapping out to disk. However, virtual memory is still vitally important for some of the other advantages it offers.

Virtual memory allows the operating system to run many programs at once — each program has its own virtual address space, which is then mapped to pages in physical memory. This mapping is stored in the page table, which itself lives in RAM. The page table is so important that it gets its own special cache called the Translation Look-aside Buffer, or TLB.

The MMU and virtual memory hardware also work with the operating system to enforce memory protection — don’t let programs read or modify each other’s memory space, and don’t let anyone mess with the kernel. This is the protection that is sidestepped by the Spectre and Meltdown attacks.

Into the real world

As you can see, even relatively simple cache systems can be hard to follow. In a modern processor like the Intel i7-8700K, there are multiple layers of caches, some independent, some shared between the CPU cores. There also are the speculative execution engines, which pull data that might be used from memory into cache before a given core is even ready for it. That engine is the key to Meltdown.

Both Spectre and Meltdown use cache in a timing based attack. Since cached memory is much faster to access, an attacker can measure access time to determine if memory is coming from RAM or the cache. That timing information can then be used to actually read out the data in the memory. This why a Javascript patch was pushed to browsers two weeks ago. That patch makes the built-in Javascript timing features a tiny bit less accurate, just enough to make them worthless in measuring memory access time which safeguards against browser-based exploits for these vulnerabilities.

The simple knee-jerk method of trying to mitigate Spectre and Meltdown is to disable the caches. This would make our computer systems incredibly slow compared to the speeds we are used to. The patches being rolled out are not nearly this extreme, but they do change the way the CPU works with the cache — especially upon user space to kernel space context switches.

Modern CPU datapath and cache design is an incredibly complex task. Processor manufacturers have amassed years of data by simulating and statistically analyzing how processors move data to make systems both fast and reliable. Changes to something like processor microcode are only made when absolutely necessary, and only after thousands of hours of testing. A shotgun change made in a rush (yes, six months is a rush) like the current Intel and AMD patches is sure to have some problems — and that is exactly what we’re seeing with big performance hits and crashes. The software side of the fix such as Kernel Page Table Isolation can force flushes of the TLBs, which also come with big performance hits for applications which make frequent calls to the operating system. This explains some of the reason why the impact of the changes is so application dependent. In essence, we’re all beta testers.

There is a bright side though. The hope is that with more time for research and testing on the part of the chip manufactures and software vendors, the necessary changes will be better understood, and better patches will be released.

That is, until the next attack vector is found.

15 thoughts on “Spectre And Meltdown: How Cache Works”