A railgun powered by an LIR2032 cell wins the Supernova Award with a cash prize of $500.

This project by [consciousflesh] dumps about 500-750 Joules of energy into a set of electromagnets to launch a graphite projectile. It makes quite a flash because the projectile is torn apart in the process.

The Supernova Award sought the project that burnt through the coin cell the quickest. This one’s a thinker, since the internal resistance of the coin cell is so large that you can’t get a lot of power out of it quickly. The solution is to transfer that power to another storage medium first. In this case, [consciousflesh] built a clever multi-stage DC-DC converter to get the most out of a single LIR2032 — the rechargeable cousin of the CR2032 which has lower internal resistance and yielded much better results. 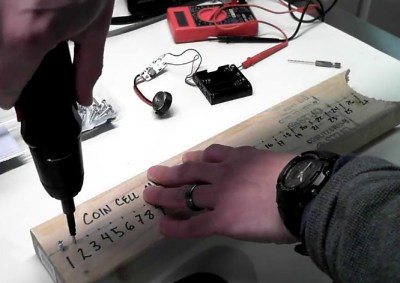 Driving screws into a 2×4 using power from a CR2477 wins the Heavy Lifting Award with a cash prize of $500.

This project is by [Ted Yapo], and is a fascinating way to get a lot of torque out of a tiny power source. Like the railgun above, [Ted] uses an intermediary medium to store the energy. He started with four NiCad batteries which had been stored with shorting bar across them (no juice to provide a head start). He discharges the CR2477 through a boost converter which he altered to produce a constant current output to maximize the power transferred.

The demo video is a bit comical as the familiar poor performance of NiCad cells means he took breaks between attempts to drive the screws further. He ended up with 19 screws started but only 3 fully driven. What we really liked seeing is that he continued his tests. After fully charging the batteries from wall power he was able to drive 27 screws. This equates to a total charge of only 11% from the coin cell battery. 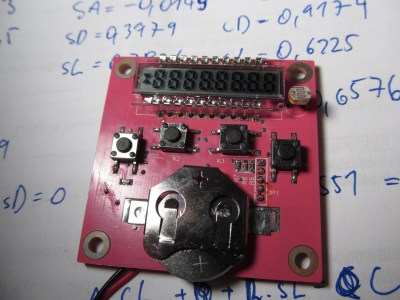 A light level geolocator powered by a CR2032 is the winner of the Lifetime Award with a cash prize of $500.

[Jaromir Sukuba] took a really interesting concept, figured out how it worked, implemented it with super low power, and then proceeded to test across different parts of the world. His creation receives the Lifetime award because it is calculated to operate for 10 year with the LCD on, or 30 years with it off.

It’s a logging device that deduces its location in a very interesting way: by recording the ratio of light and dark in a 24-hour cycle. It’s a reverse calculation of sunrise and sunset (where you would need to know your coordinates). This takes date, sunrise time, and sunset time to calculate location. [Jaromi Sukuba] found some friends on Hackaday.io in different parts of Europe to help test, sending each a prototype. The results are quite good. They can be off by a few dozens of kilometers but for extremely low-power, long-lifetime datalogging of wildlife movements this works with similar accuracy to the hardware that inspired his design adventure.

In addition to the top prizes, 20 entries have been awarded $100 credits to Tindie.com for their excellent work. Check out the list of winners here, browse through all of the entries, and make sure to join us below for a few honorable mentions.

We had many favorite entries that didn’t make it into this list of 21 winners and you will see a few more articles that feature those in the coming days. But we wanted to mention a few that were strong contenders for the top prizes.

Can you jump start a car with a coin cell battery? Sadly, no, but it’s not for lack of trying. [Ted Yapo] gave it his best and was a contender for the Supernova Award.

Looks like it might be possible to blink an LED for 20-40 years using [Robert Mateja’s] modern update on the concept of the LM3909. That’s an end-of-life chip whose purpose was to blink an LED. When we featured a story about that part, [Robert] grabbed his low-power magic wand and came up with this design which placed highly in the Lifetime category.

And finally, the ability to run a trainset around the Christmas Tree using a coin cell is extremely impressive. We previously featured this project built by [Mike Rigsby] which was hopelessly tied for the Heavy Lifting award but a winner had to be picked. This is excellent work [Mike] and we’re glad to have debated it in depth during judging. Well done!