We get a lot of awesome projects sent our way via the tip line. Well, mainly it seems like we get spam, but the emails that aren’t trying to sell us something are invariably awesome. Even so, it’s not often we get a tip that contains the magic phrase “determine Mach number” in its list of features. So to say we were interested in the Asgard Air Data Computer (ADC) is something of an understatement. 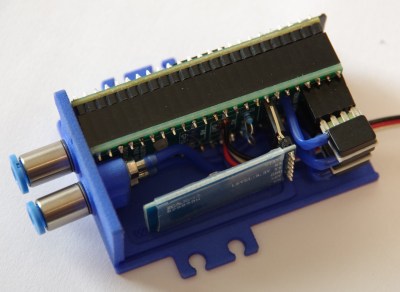 Now we’ll admit right up front: we aren’t 100% sure who the target audience for the Asgard is, but it certainly looks impressive. Team member [Erik] wrote into tip line with information about this very impressive project, which is able to perform a number of measurements on incoming air, such as true speed, viscosity, and temperature. The team says it has applications ranging from HVAC to measuring the performance of bicycles. We don’t know who’s going so fast on their bike that they need to measure air speed, but of course the hacker community never ceases to amaze us.

Even if you don’t have a jet fighter that could benefit from a high performance ADC such as Asgard, you have to be impressed by the incredible work the team has done not only designing and building it, but documenting it. From the impeccably designed 3D printed case to the stacked PCB internals, every aspect of Asgard screams professional hardware.

Data collected from Asgard can be stored on the internal micro SD if the device is to be used in stand-alone mode, or you can connect to it over USB or Bluetooth thanks to the HC-05 module. The team has even put together some scripts to merge the Asgard’s generated air data with GPS position information.

We’re all for putting high quality sensors in the hand’s of the community and seeing what they can come up with. The spirit and build quality of this project reminds us of the impressive work [Radu Motisan] has been doing with his distributed air quality sensors.