Unpacking the box we have the iron itself, an instruction sheet in Chinese and English, and one of those little folded metal rests. Your tastes may vary, but I ignored the final item as I have always preferred a full-size soldering iron stand.

How It Measures Up

The iron itself is about 220mm (8.75″) long, of which about 70mm (2.75″) is the element shroud and tip, the rest being a plastic handle about 20mm (0.9″) in diameter. It weighs about 68g (2.4oz). On the side of the handle is a black panel with an LED display, two buttons to control the iron, and a mains on/off switch with a pleasing click action. The mains cable is fairly standard stuff rather than the extra-flexible silicone you’ll find on more expensive irons, it’s about 1.5m (5′) long, and my European variant had a Schuko-style Continental European plug for which the supplier had given me one of those downright lethal adapters to a British BS1363A plug. The same iron can also be had with an NEMA-style plug for those parts of the world who take their electricity at 120-ish volts. 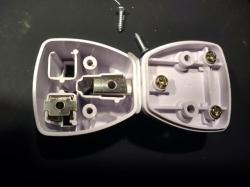 Amusingly for once the BS1363A adapter was perfectly safe if completely useless. Its manufacturer hadn’t fitted any of the metalwork on the live side. Consider just fitting a safe plug if you have one of these adapters.

The iron is supplied with a general purpose tip, ideal for all through-hole and larger SMD work, but probably a bit large for more fine-scale work. Fortunately the tips are the familiar Hakko 900M series, so there should be no difficulty in finding suitable upgrades. Powering it on you see the 7-segment display cycle through the temperature readings as it reaches its 350 degree Celcius default setting. It’s no slouch in the speed stakes, heating up in a similar time to my TS100 and more quickly than my trusty Antex. Setting the temperature anywhere between the limits of 80 degrees to 500 degrees is simply a matter of a long press on the yellow button before using the two buttons to move the figure up or down.

Description behind us, what’s the iron like to use? To test it I pulled out the other item I’d put on my order, a little through-hole soldering kit for a low frequency function generator that had cost me the princely sum of £4.50 as a test item for the iron. It is hardly a challenging piece of construction, but it has a good mix of 0.1″ spaced components with larger metal-bodied potentiometers and connectors. It should give any soldering iron with a general-purpose bit an easy work-out.

When soldering, the iron’s size was not the issue users of more svelte irons such as the TS100 might expect it to be. It has a slim girth and light weight, so despite its length is was not cumbersome in any way. There was plenty of heat when it was needed as you might expect from a temperature-controlled iron, and never any of those awkward will-it-melt moments. Given an appropriate tip this would not be the wrong tool for either bigger or smaller work.

A Look Under The Hood

When you buy a cheap mains-powered item from the other side of the world, it’s always a good idea to take a look at its mains safety — especially when you’ll be holding onto it during operation. Dismantling the E90W is a straightforward enough process, simply unscrew the shroud and remove the tip, then unscrew the collar at the base of the element. The PCB will then slide out as you feed the mains cable through its strain relief grommet.

The board runs the full length of the handle and has display and switches on one side, and much of the electronics on the other. The main semiconductor components from one side to the other are a bridge rectifier fed by the mains input, an ST Microelectronics STM8S103K3 microcontroller, an SSMC SM7015 low voltage power supply chip for which I can only find a Chinese datasheet, and a Haolin HD840L high voltage power MOSFET.  The display is a seven-segment unit rather than the expected OLED.

Starting at the mains input, cable strain relief is provided by the usual flexible grommet and a cable tie securing it to the board. I would have preferred to see the cable tie gripping the outer insulation rather than the wires themselves, but I have seen far worse. The two live and neutral wires join the board immediately and are fed into the click-action mains switch, while the earth wire is much longer and goes almost the full length of the board before joining a short track to a spring contact designed to touch the element shroud and earth the tip. At the element end there is a reasonable distance between the high-voltage track and the earth track, certainly much more than you will find as the isolation barrier between tracks in many phone chargers.

Interestingly there is an unpopulated header for a serial port, giving us the possibility that the little 8-bit microcontroller could be hackable. It won’t give you the versatility of the TS100’s ARM Cortex and OLED display, but there must be software tweaks that could be made to the iron. If you are the type of person who routinely hooks up serial ports to embedded microcontrollers you will probably know this already but it has to be said anyway: this serial port is on a live board that is not isolated from the mains in any way. To use it you will need to unplug the iron from the mains, and connect your own low voltage supply to the iron’s processor. Not taking this advice will damage your computer and probably expose you to a dangerous electric shock risk. We like our readers to remain alive.

The element is a ceramic unit, which according to the instruction sheet is removable and replaceable. One thing to watch out for when disassembling the iron, on mine the red silicone rubber power button came out as I removed the PCB. If this happens to you, don’t try to refit it down the length of the handle with a pair of tweezers, instead it just pushes in from the outside with the aid of a small screwdriver to ease its lip past the bezel.

Our Verdict: Consider This Iron

The CXG E90W is a temperature controlled soldering iron with plenty of power that seems to be a perfectly reasonable performer and takes standard tips, for an extremely low price. Having taken it apart I’m satisfied with its level of insulation and mains safety though a little more strain relief wouldn’t be a bad thing. I really like it for its on-off switch, something I wish more irons would incorporate. That it has a possibility of being hackable is a bonus, though most users will just need a stock soldering iron. It’s not going to trouble the Wellers of this world and it’s not as light as some of its competition, but it’s a perfectly usable size and weight, has decent build quality, and of course that price is very low. It’s not going to displace my TS100, but I can see that it might tempt quite a few buyers who were considering spending three times as much on the Miniware iron. If it were my only iron, I’d be happy with it.

Postscript: My £4.50 function generator kit was a well-designed little board with a really nice laser-cut Perspex case, that was a joy to build while testing the E90W. Unfortunately though the function generator kit shown here is let down by atrocious quality potentiometers, and is one of those items where you need to waggle the controls a little to get it to work. It’s not worthy of a review of its own, suffice to say that if you pay £4.50 for a kit you can expect the quality to be variable. I’m still on the hunt for a better function generator.