We think of hovercraft as a modern conveyance. After all, any vision of the future usually includes hovercraft or flying cars along with all the other things we imagine in the future. So when do you think the hovercraft first appeared? The 1960s? The 1950s? Maybe it was a World War II development from the 1940s? Turns out, a human-powered hovercraft was dreamed up (but not built) in 1716 by [Emanuel Swedenborg]. You can see a sketch from his notebook below. OK, that’s not fair, though. Imagining it and building one are two different things. 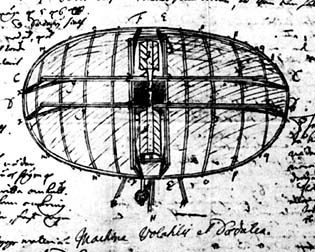 [Swedenborg] realized a human couldn’t keep up the work to put his craft on an air cushion for any length of time. Throughout the 1800s, though, engineers kept thinking about the problem. Around 1870, [Sir John Thornycroft] built several test models of ship’s hulls that could trap air to reduce drag — an idea called air lubrication, that had been kicked around since 1865. However, with no practical internal combustion engine to power it, [Thornycroft’s] patents didn’t come to much. In America, around 1876 [John Ward] proposed a lightweight platform using rotary fans for lift but used wheels to get forward motion. Others built on the idea, but they still lacked the engines to make it completely practical.

But even 1940 is way too late for a working hovercraft. [Dagobert Müller] managed that in 1915. With five engines, the craft was like a wing that generated lift in motion. It was a warship with weapons and a top speed of around 32 knots, although it never saw actual combat. Because of its physical limitations it could only operate over water, unlike more modern craft.

It would be 1926 or so before [Konstantin Tsiolkovskii] worked out the mathematics of the hovercraft. Meanwhile, in 1929, Ford (the car company) was experimenting with pressurized air floating things like factory equipment and trains. This wasn’t practical for building a hovercraft, though.

It was a Finn, [Toivo Kaario] that worked out the practical aspects of using a flexible envelope for lift. He failed to get funding, but did inspire [Vladimir Levkov] who built several fast attack boats similar to the [Müller] design. Some of these could reach 70 knots. Paradoxically, the war ended his efforts. An American, [Charles Fletcher] developed the Glidemobile (see below) during the war, but the project was classified at the time.

A British engineer, [Christopher Cockerell] and his team worked out the methods of modern hovercraft — apparently through experiments with a coffee tin, a cat food tin, and a hairdryer. Using a curtain with trapped air inside allowed a smaller airflow to have a much larger impact than in previous designs. At first, the military classified it. However, the air force didn’t want a boat and the navy didn’t want an airplane, so by 1958, [Cockerell] was free to pursue commercial development. As an aside, [Cockerell] was part of the teams that developed the first radio direction finder and radar.

By 1962, there was commercial ferry service on a small scale and by 1968, there was serious commercial use, with a ferry carrying up to 254 passengers and 30 cars. Today, Hovertravel still offers public service between the Isle of Wight and England (see below).

Not That Modern After All

Who knew that a vehicle that we still think of as futuristic has roots going back 300 years? Even if you discount the early work, real hovercraft were operational well before World War II. They still have their uses although passenger service has declined. A combination of tunnels, more efficient multi-hull boats, and reduced surface travel have conspired to make hovercraft ferries an oddity.

The famous ferry between Calais and Dover was a noisy beast, as you can see in the 1991 video, below. The noise is one reason that there was rarely any use of hovercraft on rivers through major cities.

If you want to dip your toe into this old but new tech, we looked at a 3D printed hovercraft recently. Here’s another one that might feed your need for speed. Oh. And before you ask “Where’s the hack?” We’d ask you to consider this:

32 thoughts on “Hovercraft Of The Future”