Stephanie Kwolek’s life story is a study in contrasts. Born in 1923 in a rural town outside of Pittsburgh, Stephanie enjoyed a happy childhood with strong yet gentle influences from loving parents, both Polish immigrants. Her mother had a love of fashion, and Stephanie enjoyed watching her sew dresses. She imitated her mother at first with paper dolls, and later took up sewing herself, making many of her own clothes. Her interest in fashion stayed with her, to the point that she would seriously consider a career as a designer.

Her father was an amateur naturalist who would take her on long walks in the Pennsylvania woods, observing the flora and the fauna and teaching Stephanie how to catalog and classify the natural world. Sadly, her father died when she was only 10, but the interest in the natural world he inspired in her never left. She excelled in school, especially her math and science classes, doing “much more reading than was intended for someone of my years,” as she put it.

After graduating high school, she enrolled in the Carnegie Institute of Technology, now known as Carnegie-Mellon University, in Pittsburgh. It was 1942, and even though the world was tearing itself to pieces, her timing would prove to be propitious. Stephanie enrolled in the chemistry program, and unlike so many women in science at that time, she experienced little of the usual “old boy’s club” exclusion. Perhaps thanks to the fact that so many men of her generation were absent from the classrooms (but more likely due to how bright she was) Stephanie was not only allowed and encouraged to study chemistry alongside the men, she was actively included in their groups. In her first year at Carnegie, she was even appointed to a panel by the chemistry faculty and encouraged to present her work.

As her undergraduate years were wrapping up, Stephanie was still on the fence about what to do with herself. A career in fashion design still intrigued her, and she also toyed with the idea of becoming a teacher. But she thought the best use of her new chemistry degree would be a career in medicine. Then as now, medical school is an expensive endeavor, so to save up for that, Stephanie took a temporary job in 1946 at the DuPont Company. She worked in the Polymer Chemistry division in Buffalo, New York.

The coming post-war boom years would prove to be a great time to be a chemist, and as the years flew by, Stephanie realized that her temporary job had become a full-time passion. She relocated to the company’s R&D headquarters in Delaware and threw herself into the world of polymers. She was lucky enough to land in the group that had only recently invented Nylon. Left to her own devices, she flourished, coming up with such innovations as the classic Nylon Rope Trick demonstration where a strand of nylon is reeled out of a beaker of liquid. This phenomenon is a staple of STEM experiments to this day.

Stephanie’s 20s quickly became her 40s, and in 1965 her group was tasked with finding a new, lightweight substitute for steel belting in automobile tires, on fears of a looming oil shortage and in anticipation of a market for lighter tires. While working on reactions with terephthalates and benzamides, Stephanie kept coming up with a strange side product — a runny, opalescent solution with the color of buttermilk. Interesting polymers are almost universally viscous, and her colleagues advised her to toss the stuff.

Stephanie found the substance intriguing and didn’t toss it away, instead asking the lab’s technician to run it through the spinneret, a device for turning polymer solutions into fibers. He declined, not wanting to clog his instrument with what he thought was a solution filled with flocculant particles. Stephanie persisted, showing him that the solution would pass through a filter without leaving any residue; she would later learn that this was because she had created the world’s first liquid crystal polymer, which accounted for the solution’s opalescence. The technician relented, and the world’s first aromatic polyamide fibers were spun.

Stephanie quickly characterized the fibers, finding them immensely strong and stiff. The tensile strength-to-weight ratio was five times greater than steel, and coupled with its thermal properties, including excellent performance under cryogenic conditions, the new fiber was clearly going to be big. DuPont management was quick to commercialize the product, dubbing it Kevlar.

A Legacy of Saved Lives 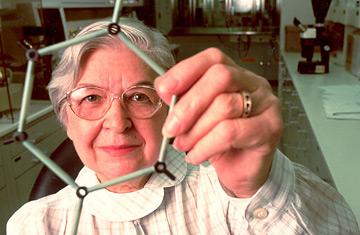 Stephanie’s invention hit the market in the early 1970s, and while Kevlar, its derivatives, and associated aramid fibers like the fireproof fabric Nomex have been incorporated into thousands of industrial, military, and consumer products, her involvement with the fiber largely ended once she filed her patent.

She continued her work on polymers for another two decades. In 1995 she would win the Lavoisier Medal for Technical Achievement, still the only woman to have done so. She was inducted into the National Inventors Hall of Fame that year too, and into the National Women’s Hall of Fame in 2003. She always contended, though, that the true reward of her labors was the lives saved by her invention.

Stephanie worked for DuPont for 40 years, retiring in 1986. She remained active in science and education for many years after that, and she died in 2014, about eight months before her invention kept me from chopping off my leg. Had I only known, it would have been nice to give her a call and let her know how much I appreciate her work.