If you were a school-age child in the 1980’s or 1990’s, you almost certainly played The Oregon Trail. Thanks to its vaguely educational nature, it was a staple of school computers until the early 2000’s, creating generations of fans. Now that those fans are old enough to have disposable incomes, we are naturally seeing a resurgence of The Oregon Trail merchandise to capitalize on one of humanity’s greatest weaknesses: nostalgia. 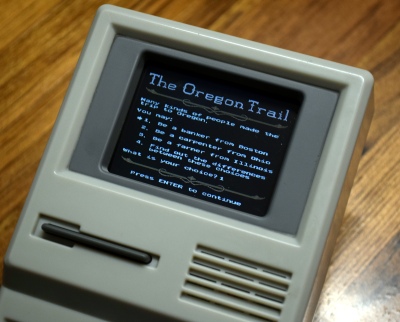 Enter the Target-exclusive The Oregon Trail handheld game. Priced at $24.99 USD and designed to look like the classic beige-box computers that everyone of a certain age remembers from “Computer Class”, it allows you to experience all the thrills of dying from dysentery on the go. Naturally there have been versions of the game for mobile devices in the past, but how is that going to help you when you want to make your peers at the coffee shop jealous?

But we’re not here to pass judgement on those who hold a special place for The Oregon Trail in their hearts. Surely, there’s worse things you could geek-out on than interactive early American history. No, you’re reading this post because somebody has put out a handheld PC-looking game system, complete with a simplified keyboard and you want to know what’s inside it. If there was ever a cheap game system that was begging to be infused with a Raspberry Pi and some retro PC games, this thing is it. 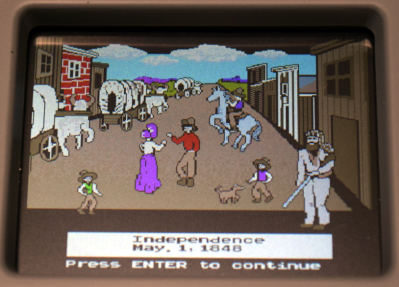 I would be remiss if I tore the thing apart without at least playing it for a bit and commenting on the system as a whole. I have to say, it’s pretty impressive given how cheap it is. The case feels strong, the buttons respond nicely, and I can’t help but love the satisfying “ker-chunk” the power button (the gray bar in the “floppy drive”) makes. That noise brings me right back to the days of DOS gaming on my 386.

The screen is surprisingly sharp, though a bit dim compared to the smartphones we spend our days staring into. Even though it’s very small by modern standards, everything is perfectly readable and the graphics, such as they are, look great.

Alright, now that we’ve put away our rose-tinted glasses, let’s see what’s hiding inside of this faux-PC.

So the first thing you notice inside The Oregon Trail is that it’s absolutely cavernous inside. The case must be at least twice as big as it needs to be, the majority of the device is just dead space. You could easily fit the Pi 3 inside of the case, to say nothing of the Pi Zero. There’s also plenty of space to put a rechargeable battery, which is good because the three AAs that power the device aren’t likely to get you very far. 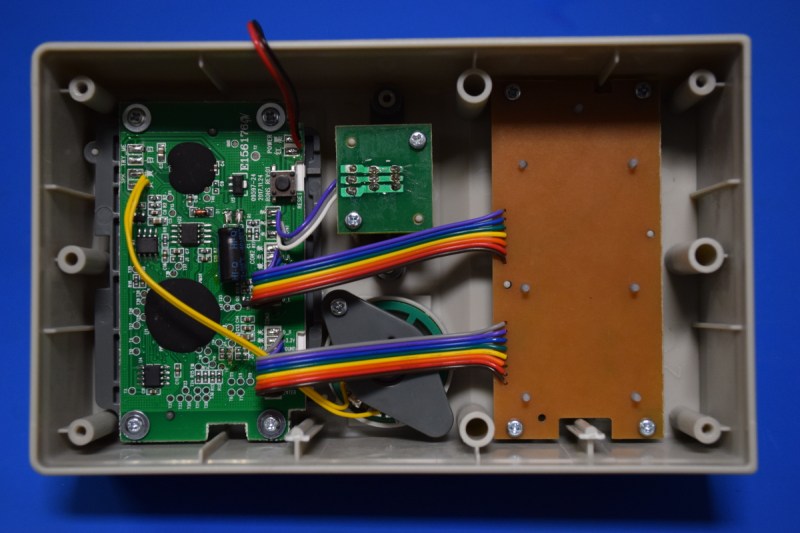 To put some numbers to it, the inside of the case is about 140 mm long, 82 mm wide, and 40 mm deep. I really can’t stress how much open area there is inside the case, you could literally fill the thing with rocks and then easily screw it back together. It seems exceptionally wasteful from a materials standpoint, but absolutely fantastic if you’re trying to put extra gear inside.

Main Board and LCD

As you might expect, the main board of The Oregon Trail is hiding most of its goodies under black epoxy blobs. There’s a dizzying array of test points, but none labeled to say what they do. There are a few solder jumper pads which looked interesting, but after bridging them in different combinations I didn’t notice anything changing the game. I thought for sure they would at least change the language, but no dice.

One of the devices on the board has had the label completely obliterated, but the other two were visible under the microscope.

The HT24LC08 is a 1KB serial EEPROM, so if you want to hack the contents of your wagon, this would likely be the place to do it. I’m not sure about the other chip, G25Q80CW. The searches I’ve done have come up empty handed.

Of course, the main board is likely to get chucked in the bin by anyone who buys The Oregon Trail to modify it, so we won’t dwell too long on the specifics.

As for the screen, the flex cable is directly soldered to the back to the main board. The ID ZSX0243 is printed on the back of the panel and is even embossed on the ribbon cable, but as with the second chip on the main board, I haven’t found any useful info online about how one might interface with it.

In what’s likely the most exiting bit of news, the keyboard on The Oregon Trail is exceptionally hackable. It’s a simple membrane keypad, and each wire is individually labeled for your convenience (on the keyboard and main board side). It’s ready to get soldered directly into the GPIO pins of your favorite microcontroller or SBC.

The biggest problem I see is the rather limited utility of the keys currently on the game. The directional pad (with diagonals) is nice, but not sure what kind of mileage you’ll really get out of a “Wagon” button. The best bet might be to repaint the keys, or go all out and 3D print new ones with whatever iconography works for your intended purposes. 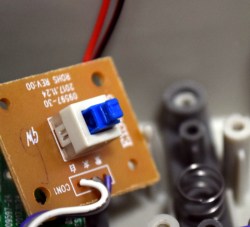 Incidentally, remember that nostalgic sound I said the power button makes when you push it? Come to find out, the reason it sounds like a computer power switch is because that’s exactly what they used, complete with spring-assist. I’d recognize that little switch anywhere. I don’t know if that was an intentional little detail on the part of the designers, or just the easiest way for them to implement a hard power switch, but I’ll take it either way.

All told, the physical controls on The Oregon Trail should be very easy to implement into whatever project you might have in mind, and with a little cosmetic retouching of the keys, should make for a pretty slick setup.

Playing The Oregon Trail for a bit was fun, and I think they did a respectable job of bringing the experience of the game back to life on this new platform. But the fact is, you can just play the game on your computer or phone every couple years when the crushing depression of real life forces you to relive your youth for an hour or so. By then you’ll remember we have YouTube now, and move on.

I think it offers much better value as a platform for hacking. For $25 USD you’ve got a very cool looking case that’s got plenty of room inside, and a turn-key user interface that almost looks like it was designed to be re-purposed. Its even got a power button and speaker mounted and wired up. Honestly, the thing is nearly a retro emulator kit.

Whether it’s bought by Millennials who are feeling nostalgic for their school days or hackers looking to tear it apart and make a handheld DOOM, I think Target is going to be laughing their way to the bank with this one.