Reach Out and Touch Someone

The SCW9057G-433 comes apart in two pieces with a bit of coercion around the edges, with the battery and 3G2075 “Alarm Communicator” board on the rear and the main PCB on the front. Or, at least, there should be a battery in the rear compartment. Our particular specimen has been robbed of its backup power, so you’ll have to use your imagination.

As we can see the cellular communications board features a SIM slot (with an unpopulated spot for a second), an external antenna, and an HE863-NAR 3G module that’s capable of pulling a respectable 7.2 Mbps over HSPA and features voice and SMS support. I didn’t expect there to be much else interesting on the 3G2075, but pulling open the RF shield revealed an unexpectedly large microcontroller.

The STM32F217VGT6 packs a 120 MHz ARM Cortex-M3 CPU and an impressive array of capabilities, including built-in Ethernet and USB. It’s not immediately clear why such a powerful chip is necessary to facilitate communications between the main PCB and the HE863-NAR, though its hardware accelerated encryption capabilities are potentially being put to use. Next to the MCU is a 16 Mb AT45DB161D serial flash chip, which under normal circumstances I would assume held the chip’s firmware. But since the STM32F217VGT6 already has fairly ample onboard flash, it seems more likely it’s being used to hold configuration data.

In this series of teardowns, we’re often confronted with some unfortunate realities, such as the fact that epoxy blobs and unmarked ICs are so common these days that it’s nearly the norm. I usually consider myself lucky if it’s possible to identify one or two of the chips on the board, especially if they’re the important ones. But as luck would have it, the main board of the SCW9057G-433 is packed full of recognizable ICs. 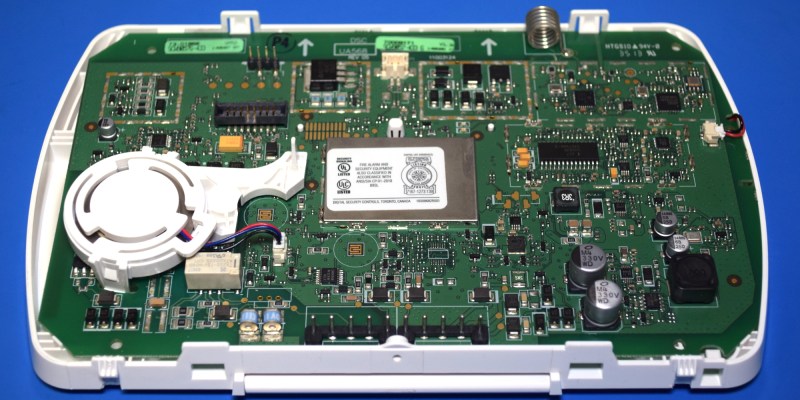 There’s a dizzying array of components here, but with a close eye we can see that the board is laid out quite logically, making it relatively easy to break down the different functional blocks. Especially since so many of the parts were obviously intended to be cordoned off from each other with snap-on RF shields, even if in the end most of them didn’t actually get installed. For example, by looking at where the coil antenna at the top of the board terminates, we can see the hardware responsible for 433 MHz communications.

One half of the equation is an Atmel ATA5428 ASK/FSK transceiver, which has a maximum data rate of 20 Kbit/s and can operate at either 433 or 868 MHz. In this case, the radio is paired with a PIC24FJ64GA002 microcontroller in a QFN28 package which appears to be running at 32 MHz by the looks of the nearby external oscillator.

Directly below that, and right next to where a speaker is plugged in, we find a slightly incongruous SOIC28 chip labeled U4082B. Located next to a MAX9730E 2.4 watt mono amplifier and a pair of MCP6002 op amps, at first I thought it might be some kind of audio alarm IC. But actually it’s a speakerphone chip that, among other things, is responsible for detecting when the user is speaking. Sure enough, a two-way speakerphone is listed as one of the features of the SCW9057G-433, presumably to be used so a representative of the monitoring company can speak to the customer directly through the alarm panel.

It seems you can’t go more than a few millimeters on this board before you run into another IC to look up, but of course, there’s only so many voltage regulator spec sheets you can read in a day. So let’s pull off the RF shield and check out the real star of the show.

Here we can see a trio of chips in their natural habitat. In the center we have the STM32F101VF, a considerably less capable relative of the STM32F217 used in the communication board. The 36 MHz ARM Cortex-M3 chip doesn’t have nearly the bells and whistles of the newer F2 series, but it’s a reliable workhorse that Impassa likely has experience with from previous products. To the right of it we see an ST-branded 45PE10VP 1 Mb serial flash chip, and to the left, a Microchip 24LC128 128 K I2C EEPROM. Between the two external chips and the 768 Kb onboard the STM32F101VF, it seems the system has plenty of room to grow.

Incidentally, back in 2018 Aaron Christophel cracked open a robotic vacuum and found a very similar MCU. As we’ve come to expect from the prolific hacker, he started working on a his own firmware for the cleaning bot, part of which involved getting the chip working in the Arduino environment. It’s not clear how far he took the concept, but it at least establishes precedent should anyone want to take on the challenge of creating a custom firmware for this unit.

The particularly keen-eyed reader may have already noticed it, but before closing out this teardown, I wanted to point out an interesting little feature of the SCW9057G-433: the tamper detectors. This capability is actually referenced in section 3.5 of the manual, and is described as a way for the unit to determine if somebody has tried to remove it from the wall.

Much like the VeriFone MX 925CTLS that I liberated from a defunct Toys R’ Us back in 2018, this is accomplished using a series of strategically placed plungers that push against traces on the PCB. Essentially it’s an open-air momentary push button that’s held closed so long as the device’s case isn’t opened. There’s one pad on the rear of the communications board, and two of them on the main PCB.

The first one is attached to a little lever that’s pushed when the SCW9057G-433 is screwed to the wall, so that the alarm will sound should anyone remove it. The central pad on the front PCB corresponds to a stalk attached to the rear plate of the case, which is clearly to alert the system if the panel has been opened. The third pad doesn’t have any obvious mate, so I can only assume its counterpart would be mounted to the battery, or perhaps some chassis component that holds it in. This would let the system detect if somebody was clever enough to try and cut the battery out from the side of the panel while it was still on the wall.

We’ve got a bunch of identifiable chips, a microcontroller that we’ve already seen programmed via the Arduino IDE, and some pretty blatant programming headers. So what’s holding back an open source replacement firmware for the SCW9057G-433?

Well, for one thing there’s still a lot of reverse engineering you’d need to do before you could make a truly functional firmware. Getting the MCU to talk to the LCD and keypad probably wouldn’t be a problem, but that’s just scratching the surface. If you feel like giving it a go, we’ve covered some STM32 reverse engineering which should get you going in the right direction.

That said, the bigger problem might simply be that a custom firmware isn’t really needed for this device. The documentation from Impassa seems exceptional, and unless you’re unlucky enough to get one of these units that’s been locked by the previous user or installer, you should have free rein to pair it with your devices and configure it however you see fit.

As much as we love seeing proprietary code being obliterated by the glorious light of open source software here at Hackaday, I’ll admit that occasionally you have to pick your battles. Though just to be safe, I might ask Aaron Christophel if he wants a new toy to play with.

The device you see here was graciously provided to us by one of our wonderful readers. If you have an interesting piece of hardware that’s just taking up space around the shop and would like to donate it towards our ongoing series of teardowns, anonymously or otherwise, don’t hesitate to drop us a line.