Have you ever looked up a recipe online, and before you got to the ingredients, you had to scroll through somebody’s meandering life story? You just want to know how many cans of tomato paste to buy, but instead you’re reading about cozy winter nights at grandma’s house? Well, that’s where you are right now, friend. Except instead of wanting to know what goes in a lasagna, you just want to see the inside of some weirdo alternative medicine gadget. I get it, and wouldn’t blame you for skipping ahead, but I would be remiss to start this month’s teardown without a bit of explanation as to how it came into my possession.

So if you’ll indulge me for a moment, I’ll tell you a story about an exceptionally generous patron, and the incredible wealth of sham medical hokum that they have bestowed upon the Hackaday community…

Imagine you’re in the unenviable, but for most of us inevitable, position of having to put your parent’s affairs in order. Even if you remove the emotional aspect of the sudden role reversal, becoming a caregiver to the person you always looked to for your own support, the logistical aspects of the transition are daunting. Especially when your parents, at great expense and over the course of several decades, amassed a very unusual collection of equipment. 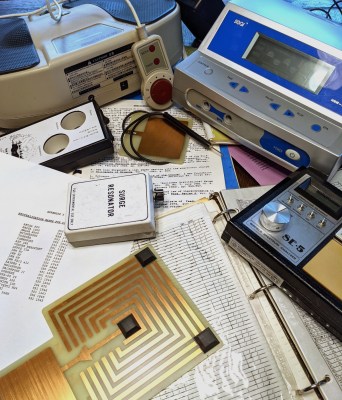 These devices are mysterious, to say the least. Many don’t have any obvious brand or model markings, and the reams of documentation that accompany them are unlike any manual you’ve ever seen. It’s clearly technical data, of a sort, but none of it makes any sense. Each document, ranging from handwritten notes on scraps of paper to professionally bound books, is a jumble of technobabble. Even after reading several pages, its meaning seems just outside your perception. You understood the individual words well enough, but for as little as you got from the combinations they were placed in by the author, it all might as well have been written in Sanskrit.

Then one day, while searching online for more information about one of the devices, you stumble upon a website you’ve never heard of before. It’s an odd looking site, with white text on a black background, and a skull and crossbones at the top of each page. Actually, on closer inspection, those aren’t bones at all. In any event, the entry this site has for the “Magnetic Wave Tester” seems promising. Rather than describing it with the admirational babbling you’ve seen elsewhere, it gets examined with scientific skepticism. The end conclusion is that it’s a harmless enough gadget, even functional on some basic level, but one that’s ultimately been designed for a singular purpose: to separate the naive from their money.

Perhaps, you think, these are just the sort of people who could be entrusted with the collection. Rather than throw it all away, you could pack up the whole lot and send it along so that each piece could be meticulously analyzed and exposed for what it really is. Maybe in the end, some good could actually come of it all.

When I agreed to take on this collection from our anonymous patron, I could hardly have imagined the scale of the undertaking. Due to their considerable size and weight each box completed the cross-country journey in its own time, and each time a new one arrived, I was sure it must be the last. All told, there’s enough material here that even if I did a teardown on a new pseudoscience gadget each month, it would take us years to get through them. But we’ve got to start somewhere, so let’s launch into the unknown with this radionic analyzer.

What is a radionic analyzer, you may ask? We get our answer from Kelly Research Technologies, a company that manufactures a what appears to be a modern clone of this device that they’ve imaginatively called the Kelly Personal Instrument. They give a succinct explanation of the device’s function right at the top of the manual:

Well, that sounds handy. Don’t know about you, but I’ve always found engineering the fabric of reality to be a bit of a chore. If this gadget can really help get things cooking at the subatomic level, then honestly, the integrated broadcast circuitry is just icing on the cake. With features like this, Kelly Research is almost giving the things away at $1,500 a pop.

I mean, come on. It’s not like we’re going to open it up to find a largely empty box with a bunch of random wires inside. Right?

What Did You Expect?

In all seriousness, what else could it have been? With the Magnetic Wave Tester, there was at least a chance that the device offered some level of functionality. But when the manufacturer’s own description of the unit says it can broadcast reality at the subatomic level, all reasonable expectation goes out the window.

But still, it’s not like the device is just filled with sand or contained a bunch of crystals wrapped in aluminum foil. There’s identifiable components here, and somebody has gone through the trouble of wiring it all up. So does it actually do anything? Well, even though the manual assures the user that their new radionic analyzer is a free energy device that doesn’t require any external power to function (seriously), it does note that plugging the unit’s AC adapter into the wall does speed up the whole becoming one with the cosmos thing.

Sure enough, if we power it up and fiddle with the switches and dials, the LEDs will blink at different rates. So let’s take a closer look and see what’s happening under the hood.

Inside the analyzer, the stars of the show are clearly the four variable capacitors. These are actually very nice units, and though I couldn’t find any identifying markings on them to confirm, they give me the impression of being vintage. Interestingly the manual claims the device utilizes “custom-made parallel plate mechanical capacitors”, and while I sincerely doubt they were custom made, there’s no question they were expensive. Spinning the dials certainly feels nice, but for the price, I should hope so. 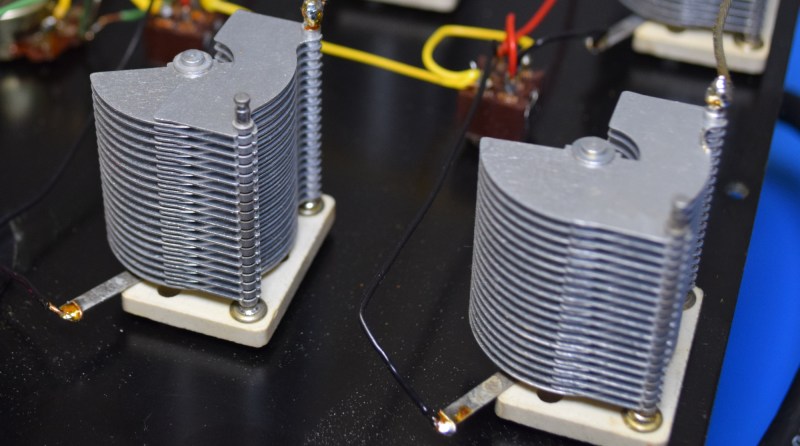 Looking closely at the color coded wiring, we can see they have indeed been connected to the double pole double throw (DPDT) switches as described by the text on the front panel of the unit. That is to say that the four capacitors have been isolated into two banks, and that they can not only be independently connected or disconnected from the ground side of the circuit, but that you can select between the left and right capacitors using the polarity switches.

A master class in wire management

But what is the rest of the circuit doing? Beyond the “intensity” potentiometer, the indicator LEDs, and a coil that looks suspiciously like an old roll of magnet wire, there’s nothing else on the front panel. Logically, the secret to the device’s operation must be on the small PCB mounted inside the case.

It’s a simple little board with only a single IC on it, an LM3909N. Perhaps it’s some kind of subatomic transducer? No, far from it. A quick check of the datasheet confirms what many in the audience probably already guessed: it’s a chip designed to flash LEDs.

So just to be clear: not only is the single piece of legitimate circuity in this device a bare bones PCB that does nothing but flash the LED indicator on the front panel, but they couldn’t even be bothered to use a 555.

I think any reasonable person already knows what we’ll find in the smaller box, which according to the manual is the “sample well” where you’re supposed to put your crystals and such. But just so nobody can accuse us of cutting corners, let’s get it over with. 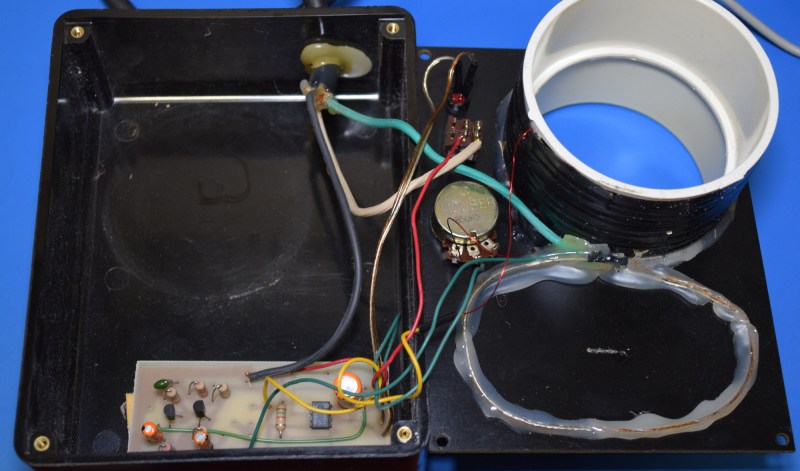 Oh look, what a surprise. It’s another LED blinker, and this time they’ve run the ground side through what appears to be a coil wrapped around a PVC coupling and a scrap of lamp cord. Enough said there, I think.

We’ve really gotten this series off to an auspicious start, haven’t we? While there was never any question that such a preposterous device would be anything but snake oil, I expected a bit more effort. Beyond the few high quality components, the internal construction of this device is abysmal. Between the lamp cord, heavy handed application of hot glue, and general disarray of the wiring, you’d think this was somebody’s first go with the soldering iron.

In terms of functionality, at best we can say that the device seems designed in such a way that it could be considered the most fanciful variable capacitor ever constructed. Additionally, attaching the oscilloscope between the output and ground plugs on the front of the unit did show a mad cacophony of low-amplitude analog noise, likely interference being picked up by the tangle of wires and coils within the box.

Of course, it occurs to me that the device may be working exactly as its manufacturer intended. Further, that if pressed, we would be told that the fact we can’t divine the purpose or function of the machine’s internals is the product of our own feeble understanding of subatomic technology. In other words, serious discourse simply isn’t possible when dealing with equipment like this. At best, we can simply shine a light into the darkness, and let the rational observer make their own conclusions.