In this post I’ll quickly demonstrate how to load an image, overlay it with text, and then save the resulting image to a new file. This technique is ideal in situations where a display doesn’t need to be updated in real-time; visuals can be generated at regular intervals and simply displayed as static images. Possible uses include weather displays, “magic” mirrors, public signage, etc.

To manipulate images in Python, you need the aptly named Python Imaging Library (PIL). Unfortunately, PIL development seems to have stopped sometime in 2009 and while it technically still works, it doesn’t support Python 3.x. A fork of PIL exists, called Pillow, which is actively maintained and fixes some of the issues with PIL. If for nothing else, you should use Pillow just to future-proof your code.

As with most Python libraries, it can be installed with pip:

For this technique we’ll be loading two external resources: a TrueType font for our text, and a background image to overlay. Between these two elements you have the opportunity to put together a very visually appealing final product with minimal effort and code. If you plan ahead, you can add tables or other visual delimiters to the background image, and of course there’s a whole universe of awesome fonts out there.

As a friendly reminder, make sure the licenses for any fonts or background images you include in your project are properly adhered to. If you’re just working on a project for yourself you can do whatever you wish, but once you put it up on GitHub or otherwise start distributing it, things can get tricky. I’ve found that most fonts posted online tend to have pretty permissive licenses for non-commercial use, but you should always double check. Even if non-commercial use is allowed, the terms of the license will usually ask for proper credit in your software’s documentation. The licenses for graphics can be a bit more restrictive, so I’d recommend looking at the repositories of public domain images to make life easier.

Let’s say you had a temperature sensor that was recording hourly data, and you wanted a way to show that with a bit more flair than a CSV file. We’re going to cheat a bit here and say that the list “temps” has already been populated with a few time and temperature combinations, but the rest of the code is completely valid.

The resulting image, saved to temp_log.png, can be seen at the right. 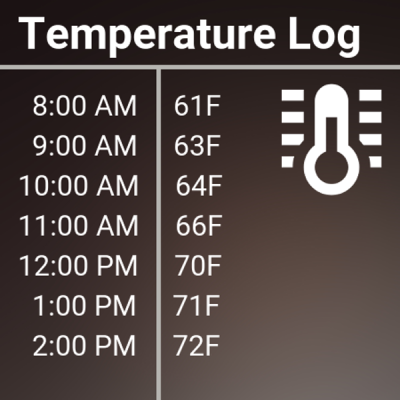 Briefly running down the code: it defines two different sized fonts, loads the background image, creates a surface we can manipulate, and then prints the text at the X and Y coordinates specified. The loop goes through the list of temperatures, printing each one a bit lower down the image. The final line saves our work to a new file. It’s worth noting that the original image is not modified in any way, so you can run this script over and over with new data and you’ll have a updated image at whatever frequency works for your project.

Of course this is a very simplistic example, but gives a good idea of how a static background image combined with dynamic data to create a visually appealing final image.

Incidentally, the font used here is from Google’s Roboto family, and the icon comes from the “Material Design Icons” project. Both excellent resources if you’re looking for attractive fonts and iconography under a free and open source license.

This article should give you an idea of the kinds of things you can do with just a few lines of Python, but it’s by no means an exhaustive look at the subject. The next step from here would be utilizing colors, opacity, and graphics primitives to create even more robust imagery, such as the system monitor display at the top of this article. With code like this and a network-enabled picture frame (perhaps of the DIY variety powered by the Raspberry Pi), you’re well on your way to creating a slick monitoring system for anything you might want to keep an eye on.

16 thoughts on “Making Pictures Worth 1000 Words In Python”