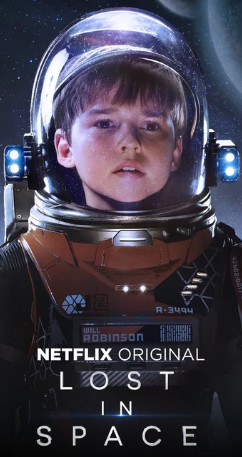 The Normalization of 3D Printing 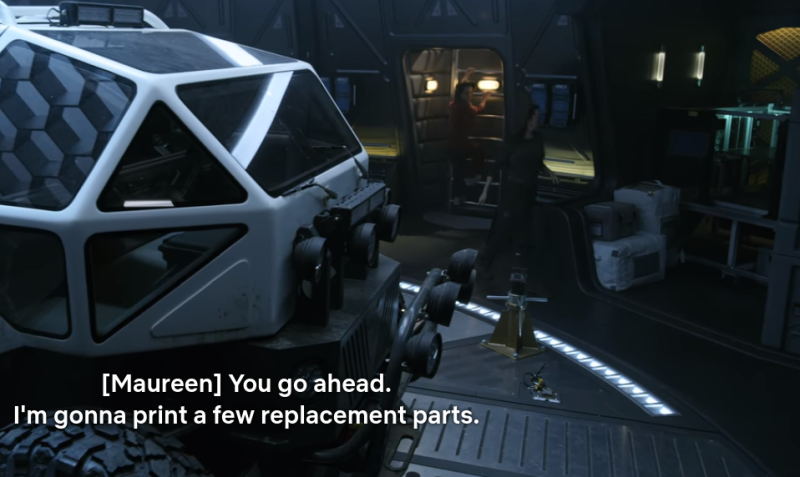 In the world of Lost in Space, 3D printing is simply a part of life. In much the same way nobody on Star Trek is surprised when a cup of hot Earl Grey materializes on the pad, the crew of the Jupiter 2 never act like the 3D printer is some exotic piece of equipment. When they need tools or replacement parts, somebody goes down below, queues up the file from the ship’s library of 3D models, and goes on about their business.

Characters simply remark that they are going to go print some parts, or else ask another character to print something for them. No one ever asks for clarification or needs an explanation on how to do it; it’s a technology so ingrained in their life that even the children in the show are familiar with it.

Which of course makes perfect sense. Even today, NASA is acknowledging how important 3D printing is for long duration spaceflight and off-world missions. Storing every conceivable tool or part the crew may need, in duplicate to be safe, is simply not an option. So if your spacecraft or station is too far out for a timely resupply mission, 3D printing may well mean the difference between life and death. It follows that a crew of explorers sent out to an uncharted planet would make extensive use of 3D printing, and Lost in Space does an excellent job of selling that idea to the viewer. 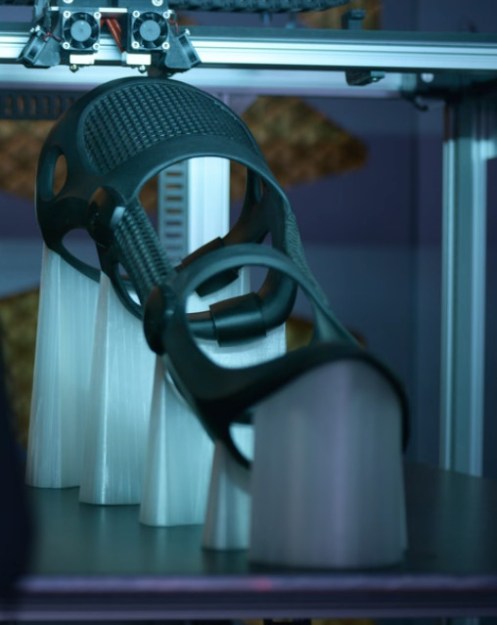 Despite taking place on an alien planet in 2048, the Robinson’s 3D printer seems to be afflicted by many of the same limitations as today’s machines.

For one, 3D printing is still very slow in the world of Lost in Space. While the writers are careful never to date themselves by giving a hard figure on how long it takes to print a particular tool or piece, it’s made clear that the printer is not something you sit around waiting on. You never see a character start a print and take the completed object off the bed in the same scene; in fact in some cases the story progresses considerably before we see somebody finally show up with the printed piece.

A particularly impressive detail is shown early on, when a leg brace is printed for an injured crew member. Due to the shape of the brace, a substantial amount of support material was necessary. The support is a different color than the printed piece, and sure enough, the printer is shown with dual extruders. Even the positioning and shape of the support columns properly corresponds with the overhang on the object.

These are details that such a small minority of the viewing audience would recognize and understand that frankly I was amazed to see they put so much thought into it. That said, this level of detail isn’t always adhered to. Some complex prints on the show have no support material at all, or are otherwise being printed at orientations that simply don’t make sense for what’s clearly a FDM printer.

Ironically, the 3D printing shown in Lost in Space might actually be a bit too realistic. Here we have a family flying around the galaxy in a spaceship, and yet the 3D printer they have aboard doesn’t look much more advanced than what you could buy today. Of course the casual observer wouldn’t pick up on this, so it works as far as the show’s target audience is concerned. But for those of us who can differentiate PLA or ABS by smell alone, it’s almost jarring to see.

This is perhaps best shown when the camera zooms in and gives the viewer a glimpse at the printer’s control panel. Not only does it look very reminiscent of the TouchUI theme running on OctoPrint, but the values shown for temperature and layer height would be perfectly valid for a contemporary 3D printer. If anything, the layer height is too high: even today’s entry level printers should be able to get down to 100 micron resolution. 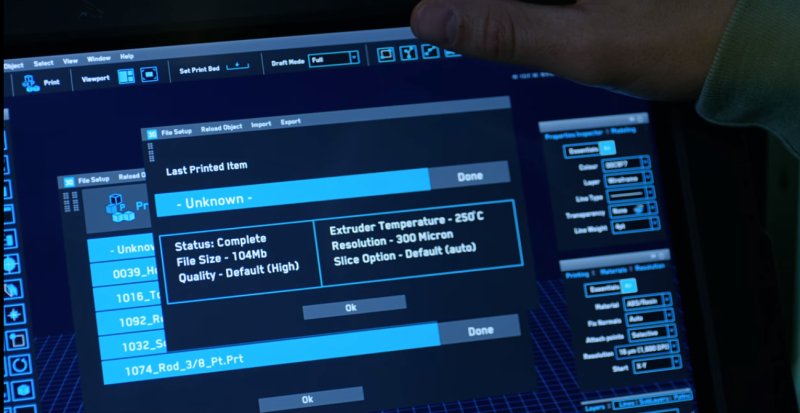 A Vision of Printer DRM

The 3D printer on the Jupiter 2 does have a few tricks that your Monoprice Mini lacks, but even here, what’s shown isn’t completely out of the realm of possibility in the relatively near future. Adding DRM to 3D printers has been a hot topic since the first Makerbot Cupcake made its first extrusion, and apparently it’s no different in the world of Lost in Space.

At one point, a crew member attempts to print a gun, and the system stops him saying it’s a prohibited object. This is exactly the type of functionality that lawmakers have been asking for since the viability of 3D printed firearms was proven. Those of us experienced in the technology understand that building a 3D printer that will intelligently refuse to print weapons is effectively impossible, but when has that ever stopped government regualtion?

In another scene, an object is tracked back to the machine that produced it by a serial number embossed into a single layer of the print. While never explained, we can presume that these printers have the ability to laser etch details onto the surface of the objects they produce; as the nozzle obviously can’t create details smaller than the layer height. The concept of using steganography, that is, hiding identifying marks in a CAD file to prove who originally created it, is often proposed as a way to combat intellectual property theft of 3D designs.

Using a microscope to see the serial number.

Whoever the 3D printing technical adviser was on Lost in Space, they should seriously get some kind of award from the RepRap community. It’s so common for the media to get technology (and especially hacking) so laughably wrong that seeing something done so well is absolutely refreshing. This is the kind of portrayal of technology in TV and movies that we need and should be supporting.

What say you, readers of Hackaday? Its been awhile since we called attention to particularly well executed portrayals of technology in film; have things been getting better or worse? Is Lost in Space a fluke, or does it represent a shift in the modern viewer’s expectations?

100 thoughts on “Lost In Space Gets 3D Printing Right”