Midway is the section where we find games that most closely resemble old-fashioned carnival games. Every one is easy to pick up, fun for a few minutes, and designed for a group of friends to enjoy themselves together. Game play ranges from two players head-to-head to cooperative all-hands-on-deck. Some of us look and see machine vision, vibration sensors, and encoders at work, but most people will just enjoy the games whose complexity is hidden behind their own novelty. 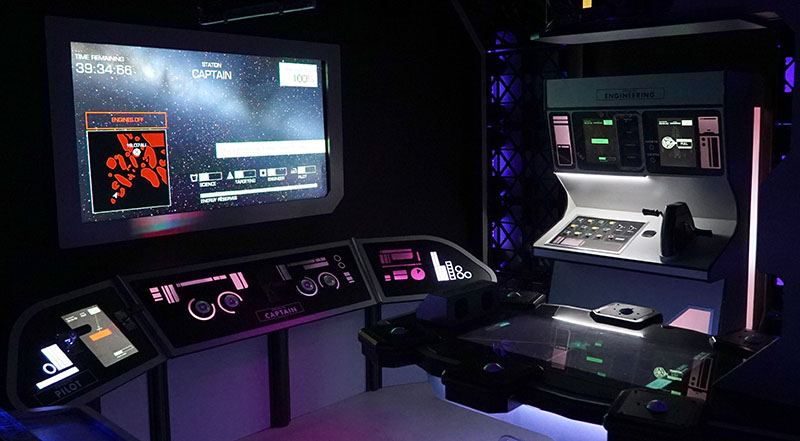 Story rooms offer a longer experience, each room is a unique narrative for participants and a distinct blend between digital presentation and tactile physicality. Science fiction fans will love “Space Squad in Space“: a starship bridge crew off to boldly explore strange new worlds, new life and civilizations… if they can keep the ship running.

There’s plenty of potential for content in “Space Squad” alone, different missions to keep things fresh without changing the set. This content platform concept is applicable across multiple attractions, but the biggest experiment will be Club 01: A room with over 20 tables each with two networked touchscreens. It’s a platform for game shows with ~50 players. All tables face the front of the room where there’s a screen for video projection and a stage for an Emcee to run the show.

One of the launch titles for this system is an implementation of bar trivia night. A different program turns wine tasting into a group activity. Instead of a sommelier telling the room what they should taste in each wine, people submit individual experiences. That’s then tallied and results projected to show how crowd consensus compares to the “right” answer. There are more ideas in the pipeline for fun things to do in Club 01, both within Two Bit Circus and in collaborating with others.

The collaboration aspect may end up being the most interesting part of the whole space. While the headline attractions are original Two Bit Circus creations, some items on the floor were created by other entertainment startups and that will continue as the facility evolves. They want to invite artists, software developers, builders and hackers who want to turn their interactive ideas into reality. Then, push their creations out onto the floor for immediate audience feedback. This is going to lead to some really inventive hacks, but for now, that has to wait. Two Bit Circus understandably have their hands full leading up to opening day.

Your Rube Goldberg Cocktail is Ready

There’s still work to be done, like fine-tuning the robotic bartender ‘Gearmo del Pouro’, a Rube Goldberg contraption mixing drinks with a side of theater. Public performance will involve staff interacting with the robot using the shiny box on the left. The screen on the right, with numbers and graphs is for debugging and will normally be out of sight.

Naturally there’ll be VR headsets, lots of them. Many of which are connected to multiplayer experiences like these tank commander pods for Battlezone VR. And yes, that’s an original Battlezone arcade console nestled in between pods.

There are many other attractions we don’t have space to cover here. If you’re in the Los Angeles area, it’s worth a stop to check out what Two Bit Circus has put together using the kind of technology we love to play with. We wish them success! And we hope some of their audience will make the journey from “How did they do that?” to “I could do that!” and join our worldwide ranks of hackers.