Sixty-four players are dropped into a map, but there can be only one that emerges victorious…heard that before, right? Thanks to PC Game modder [Bambamalicious] there is yet another entrant into the rapidly growing videogame genre. The difference this time, however, is that their 64 player DooM Royale (with cheese) mod is ready to show all those other also-ran games how the granddaddy of FPS games does it. 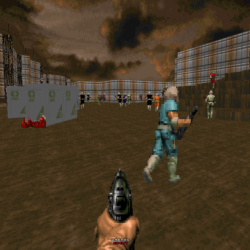 According to the announcement post the mod is “…a 64 player Battle Royale using Doom 2 as the IWAD, and the Zandronum engine as it’s base. The speed of gameplay will be unchanged from normal Doom, and when you die, that’s not the end for you!”. There is a respawn system, but each player is given a limited number of lives. To ensure no server feels like a ghost town [Bambamalicious] included bots that will spawn in matches with low participation. Each game inevitably results in a “last man standing” face off that has the victor coming away with the coveted “Royale with cheese”. Other than the aforementioned changes, this is still the seminal classic Doom (1993).

Do note that in order to play the mod, the Zandronum engine is a required in order to take part in the fun. The engine is the backbone that allows for leaderboards as well as hopping between custom servers. Zandronum additionally supports many other multiplayer match types for instance: Team Deathmatch, Capture the Flag, Possession, and Skulltag. Up to 64 players are supported in those match types as well.

From the looks of the DooM Royale (with cheese) map, there should be frequent enemy player encounters and no respite for those seeking to just “hide in a bathtub”. The multiple levels should supply plenty of opportunity to take advantage by attacking from above. Test footage of the mod in action can be seen in the video below.

For more on the DOS game that just won’t die, check out Doom running on an ATM.