At this point we’re sure you are aware, but around these parts we don’t deduct points for projects which we can’t immediately see a practical application for. We don’t make it our business to say what is and isn’t worth your time as an individual hacker. If you got a kick out of it, great. Learned something? Even better. If you did both of those things and took the time to document it, well that’s precisely the business we’re in. 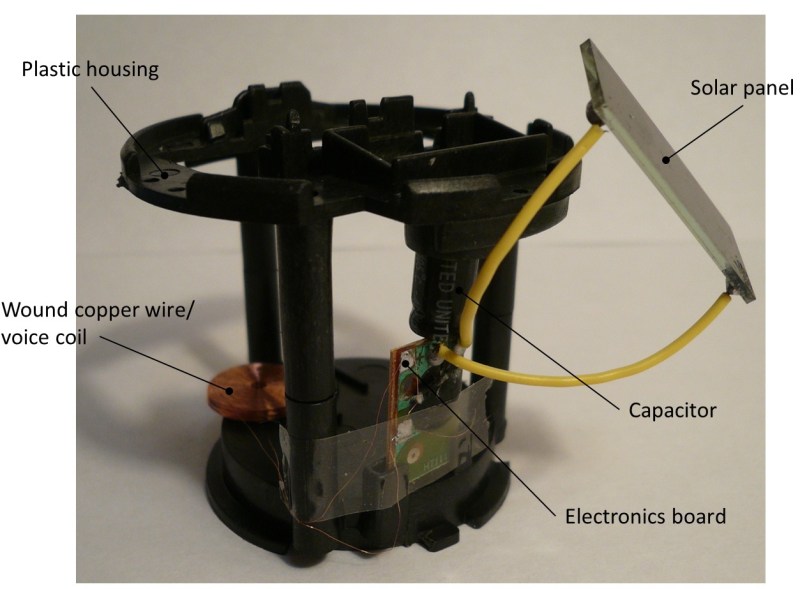 So when [Science Toolbar] sent in this project which documents the construction of an exceptionally energy efficient spinning neodymium sphere, we knew it was our kind of thing. In the documentation it’s referred to as a motor, though it doesn’t appear to have the torque to do any useful work. But still, if it can spin continuously off of the power provided by a calculator-style photovoltaic cell, it’s still a neat trick.

But how does it work? It starts by cracking open one of those little solar powered toys; the ones that wave or dance around as soon as any light hits the panel in their base. As [Science Toolbar] explains, inside these seemingly magical little gadgets is a capacitor and the classic black epoxy blob that contains an oscillator circuit. A charge is built up in the capacitor and dumped into a coil at roughly 1 Hz, which provides just enough of a push to get the mechanism going.

In the video after the break, [Science Toolbar] demonstrates how you can take those internals and pair it with a much larger coil. Rather than prompting a little sunflower or hula girl to do its thing, the coil in this version provides the motive force for getting the neodymium sphere spinning. To help things along, they’re even using a junk box zero friction magnetic bearing made up of a wood screw and a magnetized screwdriver tip.

It’s an interesting example of how a tiny charge can be built up over time, and with a nice enough enclosure this will make for a pretty cool desk toy. We’ve previously seen teardowns of similar toys, which revealed a surprising amount of complexity inside that little epoxy blob. No word on whether or not the version [Science Toolbar] cannibalized was quite so clever, however.