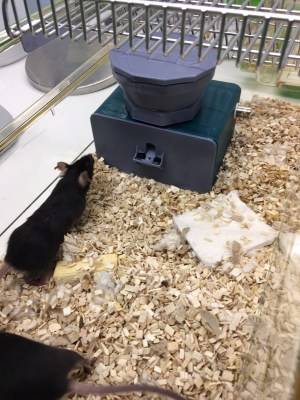 Your Brain Just Wants You to Eat

It should come as little surprise that people tend to make poor choices about what to stuff in their mouths and when to stop, but the neurological mechanisms that control these behaviors are only poorly understood. Katrina did a stint at the National Institutes of Health to probe this question, using mice as a proxy for humans.

Collecting data for this would seem easy: weigh out food, give it to the mouse, and weigh what’s left later. But as Katrina relates, it’s far more burdensome than that. First of all, one mouse doesn’t make for great statistics, and scaling the feeding process across dozens or hundreds of mice is non-trivial. So is dealing with mundane issues, like commuting into the lab to feed the animals on schedule. It was all taking too much time, and what’s worse, it only offered a broad view of how much food was eaten.

Determined to get her life back and get more granular data, Katrina designed an automated feeder for her mice. Such devices are commercially available, of course, but at a cost too high for her lab to bear. Her 3D-printed feeding system, which is entirely open source, can dispense a single food pellet from a hopper into a tray using a small stepper motor. When the mouse picks up the pellet, an Arduino detects it with a phototransistor, records the event on a data logging shield, and dispenses a fresh nugget.

It sounds simple enough, but it took many iterations to get to a final design, and even then it’s not perfect — pellets sometimes misbehave on the way down the chute. It also has no connectivity, so the next version will add WiFi for easier integration and data capture. That said, the design is good enough to have attracted the attention of labs all over the world, who have downloaded Katrina’s design and built their own version of the device. That’s the power of open source, and hats off to Katrina for sharing her hard-won experience for the benefit of all.

Speaking from personal experience, I have a word of warning for Katrina: Be careful, because you might just find that building devices like this ends up being more interesting than the science it supports. That’s how it turned out for me, anyway.