Much to the chagrin of local historians, the city of Scranton, Pennsylvania is today best known as the setting for the American version of The Office. But while the exploits of Dunder Mifflin’s best and brightest might make for a good Netflix binge, there’s a lot more to the historic city than the fictional paper company. From its beginnings as a major supplier of anthracite coal to the introduction of America’s first electrically operated trolley system on its streets, Scranton earned its nickname “The Electric City” by being a major technological hub from the Industrial Revolution through to the Second World War.

Today, the mines and furnaces of Scranton lie silent but not forgotten. In the 1980’s, the city started turning what remained of their industrial sites into historic landmarks and museums with the help of State and Federal grants. I recently got a chance to tour some of these locations, and came away very impressed. They’re an exceptional look into the early technology and processes which helped turn America into an industrial juggernaut.

While no substitute for visiting these museums and parks for yourself, hopefully the following images and descriptions will give you an idea of what kind of attractions await visitors to the modern day Electric City. 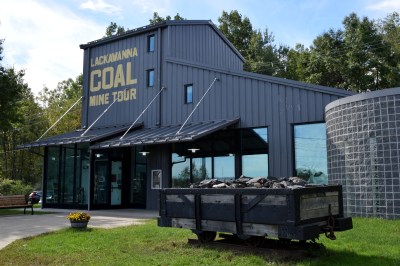 As Scranton is best known for its anthracite coal, it seems fitting to start with the “Lackawanna Coal Mine Tour” located in McDade Park. This abandoned mine was opened to the public as a museum in 1985 so that visitors could see what it was like to actually work hundreds of feet underground inside of a coal vein. Though it should be said that the experience for the actual miners, who worked the mine from 1860 all the way up until 1966, wasn’t quite so luxurious. Electric lighting and reinforcing timbers were added for the safety of visitors; the actual miners worked in complete darkness and without the comforting presence of the overhead supports.

On the surface there are various pieces of equipment on display and a small museum with requisite gift shop, but the main attraction is what’s known as the “#190 slope”. Visitors are issued hardhats and pile into a squat yellow vehicle that descends the slope to a depth of approximately 76 meters (250 feet) below the ground. Most people never get the opportunity to travel this far below the Earth’s surface, so to say it’s a unique experience is something of an understatement.

At this depth it’s always about 12 C (54 F) and water constantly runs down the walls at an alarming rate and with an unnerving sound. Despite the millions of dollars invested in turning the mine into an attraction for the public, it’s not always easy to navigate its meandering tunnels. The ground is occasionally uneven and loose, and at points the ceiling is very low. Even with the lighting installed at regular intervals, sections of the mine are still incredibly dark, and it can be difficult to see low outcroppings of rock.

Transition from coal to stone.

Also located in McDade Park, the “Anthracite Heritage Museum” features exhibits dedicated to the technology used to mine and utilize coal. Hardware that would have been used in or around the mine such as drills, crushers, and conveyor belts are on display. Most of the equipment is shown in tableau, which allows the visitors see how the pieces of machinery would have worked together to release the coal from the Earth and transport it up and out of the mine.

This museum is dedicated, as the name implies, to the electric trolley system which helped put Scranton on the map in the 1880’s. Highlights include a restored trolley featuring a cut-away so visitors can inspect the motor and gearing system, an explanation of contemporary power handling equipment, and a wide array of ancillary equipment on display such as relays and transformers.

The Trolley Museum is a wonderland for those who are interested in high voltage or turn of the century technology, and they even offer (for an additional fee and subject to weather) excursion trips on early 20th century trolleys. But it should be said it’s one of the smaller museums in the city, and visitors shouldn’t expect to spend more than an hour or two here if you aren’t taking one of the trips. 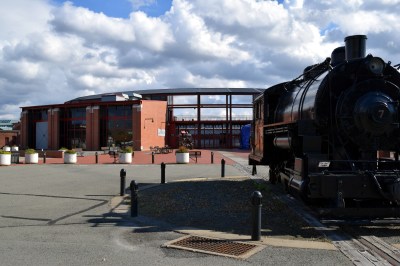 Truth be told, I wasn’t terribly keen on visiting what I perceived to be a “Train Museum” at first. There are many people who are fascinated with trains and the romance of old-time steam locomotives, but I’m certainly not one of them. I assumed the “Steamtown National Historic Site” would be of limited interest to me, but being highly recommended and part of the National Park Service, it seemed like I’d have to at least give it a chance. Besides, admittance is free.

In the end I’m very glad my general disinterest in the iron horse didn’t keep me from visiting. In all honesty, I don’t remember the last time I was so impressed with a museum. The presentation and attention to detail at Steamtown is absolutely phenomenal. I came in with a vague understanding of how these vehicles operated, and left with a deep respect for the engineering required to not only construct these behemoths in their prime, but continue to run and maintain them into the present day.

The term “up close and personal” really describes the experience here perfectly. You’ll get not only the opportunity to take a ride on a nearly 100 year old coal-fired steam train but stand mere feet away from the beasts as they meander through the complex, whistles screaming and pistons pounding. Even if you’ve got zero interest in these machines going into the museum, it’s exceptionally difficult not to be in awe of them when you can feel the heat of the boiler and smell the coal burning.

While the trains themselves are probably the biggest draw, the exhibits inside the museum are also fantastic. A good portion of them are dedicated to the socioeconomic aspects of rail travel in 1900’s America, but there’s also an entire wing devoted to train technology. Here every system of the locomotive is broken down and explained, as are the more practical aspects of running the rail service such as signaling. A major highlight of the technology wing is a locomotive which was fully restored and then cut in half down the length, so visitors can look inside its major components to better understand not only their inner-workings but their enormous scale.

These are arguably the best known of the museums in and around Scranton, but by no means the only ones. I simply ran out of time during my stay, and didn’t get to check out a few of the other museums or attractions that had caught my eye, notably the iron furnaces. To fully explore just the locations I’ve listed here you should plan on a stay of two or three days, especially as some of the museums close by early evening. If you want to take the train or trolley excursions, each one of those will eat up most of the day itself.

Beyond the historical and technological attractions, I found Scranton to be a charming place with a surprisingly vibrant nightlife in the city center. This is a particularly nice counterbalance if your traveling companions aren’t necessarily the type to enjoy exploring a coal mine all day. I fully expect to return to Scranton in the future to hit a few of the spots I missed this time around, and I’d wholeheartedly recommend it as a destination for anyone in the market for a somewhat rural vacation with a side of century old technology.