These days we make everything “smart.” If it were done today, the tracks would be billed as smart tracks because they can tell if a train is on them. The system was built with 1,000 foot blocks of track that are electrically isolated from each other. The total system in New York has almost 15,000 blocks. If a train has wheels on a block it will short the two rails in that block together. Without the train, the two rails show as an open circuit. So each block (sometimes called a circuit or a section) is basically a switch where the train itself completes the circuit.

On a single piece of track, a particular signal will turn red when a block is occupied. Adjacent blocks may also turn red based on how long it takes to stop a fully-loaded train. For the New York subway, a red light also raises a train stop which is a T-shaped bar that is usually just at track level. When the light is red, the bar will engage a trip cock under each car. The trip cock removes power from the wheels and applies emergency braking. So — barring some sort of mechanical failure —  a train trying to pass a red light will stop even if the engineer doesn’t want to stop.

Up until 1970, trains would sometimes override the train stop mechanism. This was made against the rules after — you guessed it — there were several collisions caused by overriding the safety system.

Once you know where there is a train, you get into the subject of interlocks. The idea is that you shouldn’t be able to operate the tracks in an unsafe manner. So if you light a signal green for a piece of track that crosses another piece of track, the second block must be both empty and red. Enforcing this kind of behavior is the job of interlocking. 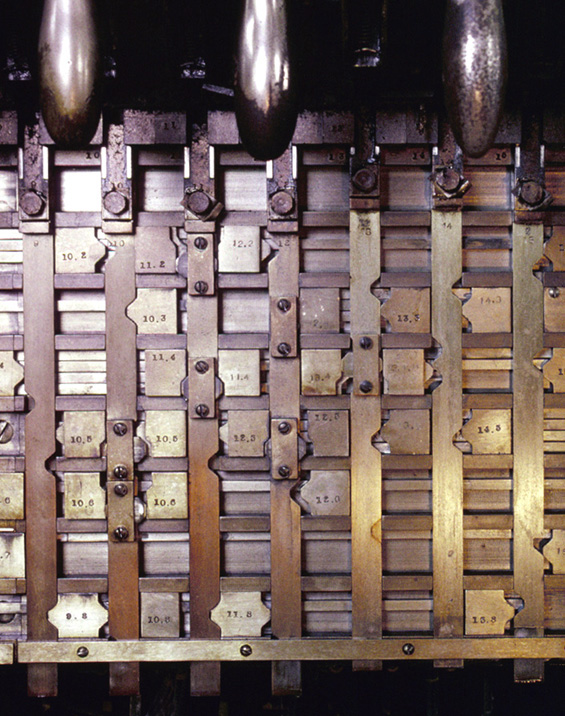 Interlocking started in Britain. In June 1856, John Saxby received the first patent for interlocking switches and signals. In 1868, there was a patent for what is known today in North America as “preliminary latch locking”. By 1873, well over 10,000 mechanical locking levers were on the London and North Western Railway.

Up until the 1950s interlocking machines used levers like the shown here that locked each other out and, apparently, some of those are still in use, but they now mostly use at least relay logic. All this, of course, is not unique to the New York subway.

In addition to the fantastic guide linked at the top, Bernard Greenberg also wrote NXSYS which is a faithful simulation of operating the New York City subway system. You can see part of an NXSYS screen here. According to Bernard:

NXSYS can be viewed, utilized, or enjoyed at any of four levels:

Pretty impressive. Even more impressive is that this whole thing could be done with levers and relays back in the old days. You can see an interlocking panel in the video below. Of course, the system gets all kinds of upgrades and you can read a lot of detail on all the technology in the subway on Wikipedia.

If you like this topic, you can check out what the British did — after all, it was their idea to start with. We’ve actually talked a little bit about block sensing trains before in a disruptive way.