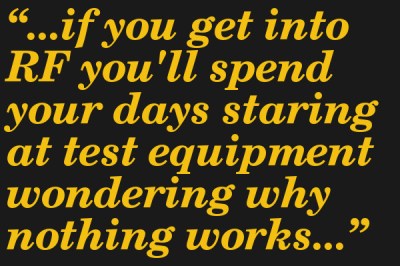 There are two broad categories of phased arrays: passive, where one transmitter feeds a bunch of antennas and phase shift networks, or active where each antenna generates its own signal. The active antennas generally perform better but are much more expensive and Hunter focuses on the passive ones. But in both cases, the directionality depends on some signals canceling others out, and some signals reinforcing others.

One of the things we’ve always found interesting is that mathematically there is no difference between an antenna receiving and one that is transmitting. Hunter uses this to explain how the phased array receives a signal since that’s a little easier on the intuition.

The explanation covers some reasonably simple math with some helpful graphics. However, due to the complexity of math for practical examples, Hunter suggests using a Python tool called ArrayTool that does a nice job of handling the real math and shows you a nice graphical output. 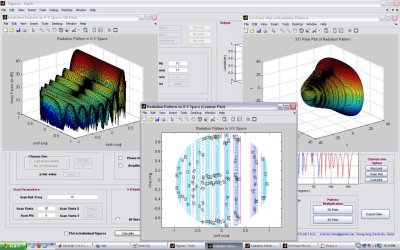 Towards the end, Hunter points out a few ways to make your design cheaper or simpler, although — of course — not at the same time. That’s always the case though.

Hunter also had two interesting observations. First, if you are working on the usual frequencies, you can probably recycle an existing antenna design and save yourself some trouble. Second, the use of electrically-steerable antennas in 5G phones means there are now chips that will do most of the work for you. Today they are expensive, but as 5G phone production scales up, you can expect the price will plummet just like other mass-produced cell phone components. One other observation he had is that if you get into RF you’ll spend your days staring at test equipment wondering why nothing works. Sounds about right to us.

If you missed Supercon, you missed a lot. But you can catch up thanks to the magic of video. Why not find out how to turn a PCB into a motor? Or maybe you’d rather build your own vacuum tube.

Slides for Hunter’s talk are available on his website.