On February 22nd, a Falcon rocket lifted off from Cape Canaveral carrying the Indonesian communications satellite Nusantara Satu. While the satellite was the primary payload for the mission, as is common on the Falcon 9, the rocket had a couple of stowaways. These secondary payloads are generally experiments or spacecraft which are too small or light to warrant a rocket of their own such as CubeSats. But despite flying in the economy seats, one of the secondary payloads on this particular launch has a date with destiny: Israel’s Beresheet, the first privately-funded mission to attempt landing on the Moon.

But unlike the Apollo missions, which took only three days to reach our nearest celestial neighbor, Beresheet is taking a considerably more leisurely course. It will take over a month for the spacecraft to reach the Moon, and it will be a few weeks after that before it finally makes a powered descent towards the Sea of Serenity, not far from where Apollo 17 landed 47 years ago. That assumes everything goes perfectly; tack a few extra weeks onto that estimate if the vehicle runs into any hiccups on the way.

At first glance, this might seem odd. If the trip only took a few days with 1960’s technology, it seems a modern rocket like the Falcon 9 should be able to make better time. But in reality, the pace is dictated by budgetary constraints on both the vehicle itself and the booster that carried it into space. While one could argue that the orbital maneuvers involved in this “scenic route” towards the Moon are more complicated than the direct trajectory employed by the manned Apollo missions, it does hold promise for a whole new class of lunar spacecraft. If you’re not in any particular hurry, and you’re trying to save some cash, your Moon mission might be better off taking the long way around.

Before we can understand the different methods used to reach the Moon, we need to know a bit about how spacecraft navigate. More specifically, how a spacecraft in orbit around one body can transition into orbiting around another. As you might expect, being literal rocket science, these concepts can be a bit tricky to master.

As such, we’re going to take a few liberties here to make things a bit easier to wrap the mind around. For one, let’s forgo the third dimension entirely and imagine that both the starting and destination orbits are on the same plane. Further, let’s say that the orbits are nicely concentric, that is, the orbit we’re looking to transition into is essentially the same as our current orbit, just at a higher altitude from our starting position. 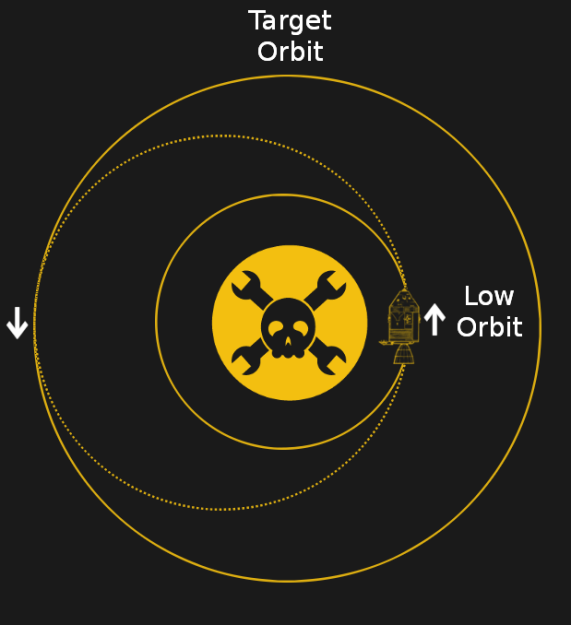 Obviously the Moon does not have a perfectly flat and circular orbit around the Earth, but that being said, it’s not a terrible analogy. Once the basics of an orbital transfer are understood, it’s not much of a leap to see how they could be applied to the Moon’s actual orbit around our planet. Though we’ll leave applying these concepts to more distant destinations in our solar system as a exercise for the reader.

The other important thing to understand is how changes in velocity affect the orbit. When velocity is increased in the direction of travel, the altitude of the orbit on the opposite side of the burn is raised. The altitude and position at which this increase in velocity occurred would then become the lowest point, or periapsis, in a now elliptical orbit. The principle works the same in reverse, should the spacecraft fire its engine against the direction of movement.

To put this into perspective of our 2D model, if a spacecraft fires its engine on the “right” side of the orbit, the change in altitude would happen on the “left” side. In this way the peak altitude of the orbit, referred to as the apoapsis, can be raised until it intersects with that of the target orbit. The spacecraft then drifts along this temporary transfer orbit until it reaches the apoapsis, where it fires the engine again to perform what’s often called a “circularization burn”. This maneuver raises the periapsis to that of the target, completing the vehicle’s transition into the new orbit.

When the Apollo missions sent humans to the Moon, they obviously wanted to get there as fast as possible. Not only were living conditions cramped aboard the spacecraft, but the longer the men stayed in space the more supplies they would need to sustain them. So to minimize the time spent in transit to and from the Moon, the Apollo spacecraft transferred from low Earth orbit (LEO) directly into the orbit of the Moon. 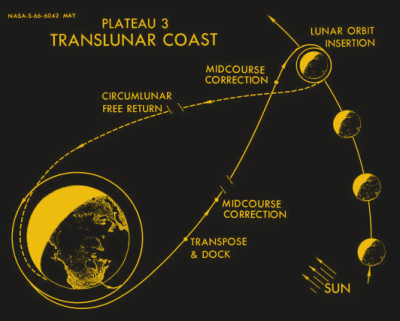 After launch, the Apollo spacecraft was put into a LEO “parking orbit” where the crew checked out the vehicle’s systems and prepared themselves for the journey ahead. Once the spacecraft was in the proper position, they performed the Trans-Lunar Injection (TLI) maneuver, an engine burn that increased their velocity enough that their orbit would intercept that of the Moon. There were a few course corrections made along the way, and some braking maneuvers to slow down and enter lunar orbit, but overall the flight path is not far removed from the simplified model we looked at previously.

This type of TLI maneuver is ideal because it gets you to the Moon as quickly as possible, but it only works if the vehicle’s engine is powerful enough engine to accelerate to the necessary velocity within the appropriate window. On the Apollo missions, the Rocketdyne J-2 engine increased the spacecraft’s velocity by a bit more than three kilometers per second in the space of just six minutes.

But what if you don’t have the powerful J-2 engine of the Apollo spacecraft, let alone the mighty Saturn V to lift you into space? What if your spacecraft is the size of a bathtub, and its status as a secondary payload means the booster rocket can’t send it directly towards the target orbit? In that case, you’ve got to get creative.

To reach the Moon, Beresheet will end up using multiple orbits to slowly raise its apoapsis over the course of the next month or so. On every orbit around the Earth, when the spacecraft makes its closest approach to the planet, it will perform a relatively short engine burn. Each burn will not only raise the apoapsis a bit higher, but will also increase the orbital period (how long it takes to complete one orbit). In other words, with each burn of the engine, the time until the next burn is pushed farther out. Once it arrives at the Moon, the spacecraft will perform a similar routine in reverse to lower itself down to the lunar surface.

Because of the compound nature of these maneuvers, it’s easy to see why the trip will take so long. Should Beresheet miss any of its scheduled burns (which in fact, it already has), the transit time could be extended even farther. On the plus side, it allows the vehicle to reach the Moon with a very small engine, and gives ground controllers plenty of time to fine tune its trajectory and deal with any issues that may occur.

Despite the incredible success of the manned Apollo missions, humanity never took the next steps towards fully utilizing our natural satellite. In the following decades only a handful of vehicles ventured back to the Moon, and most of those never touched down on the surface. But thanks to a rapidly developing Chinese space program, and the current Administration in the United States putting their weight behind a return to the Moon, we might finally finish the job we started in the 1960’s.

If that is the truly the case, these “economy” flights to the Moon may start to become more common. Launching as secondary payloads and utilizing low-thrust orbital transfers could be a viable alternative to expensive direct flights. Payloads that aren’t particularly time sensitive, such as building materials, spare parts, or long-shelf-life foods could be sent regularly to the Moon using excess capacity on commercial launches; potentially creating a whole new market for the first company to develop a small general purpose lunar cargo vehicle. Perhaps one day Amazon Prime will be able to add the Sea of Serenity to their list of supported locations.

43 thoughts on “Hitchhiking To The Moon For Fun And Profit”