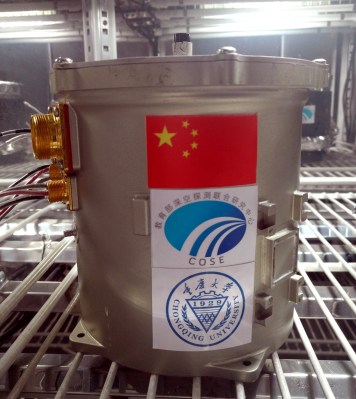 Thanks to interviews with members of the LME team and a handful of images that have been released by the Chinese media, we have a fairly good idea of how the experiment was constructed. The overall design could perhaps best be described as a metal bucket, with a flanged lid that’s screwed down to seal the contents inside. The only connections the device has to the outside world are electrical, with no provision for external air circulation or treatment. This would have been done to not only greatly simplify the design of the LME, but to prevent any possibility of its contents contaminating the lunar environment.

While it’s unlikely that spilling some Earth soil or seeds on the Moon would have much of an impact given the aforementioned environmental conditions, the scientific community demands that quarantine protocols be carefully followed when exploring other worlds. The fact that China made sure the LME was in compliance with these principles will likely be seen as reassuring to those who may have been concerned the Moon’s most recent visitor might have a somewhat cavalier attitude towards international agreements.

A small aperture at the top of the can, referred to as “light guiding module” by the designers, allows daylight into the chamber. This avoided (or at least reduced) the need for artificial lighting; this is important from a power consumption standpoint, but also served as a way to see if the plants would respond differently to sunlight on the Moon. The connectors on the side allow the Chang’e 4 to interface with the devices and sensors inside the LME, of which we know there were at least two cameras, a temperature sensor, a pump for the water, and a heating element of some type.

The LME is quite small, weighing in at only 2.6 kilograms (5.7 pounds) and offering its biological passengers just one liter of available volume to grow in. Despite this it actually contained several organisms, from fruit fly eggs to potatoes. A particularly interesting quote from chief researcher Liu Hanlong seems to indicate that the goal wasn’t simply to sprout a few seeds as later claimed, but for the LME to sustain a complex ecological microcosm: “The six organisms carried in the payload constitute a micro-ecological system containing producers, consumers and decomposers. Among them, plants produce oxygen and food for all consumers.”

Interestingly, while the LME will go down as the first biological experiment of its kind conducted on another world, it certainly wasn’t the first envisioned. NASA devised a remarkably similar experiment called the “Lunar Plant Growth Habitat” which was supposed to catch a ride to the Moon during the now defunct Google Lunar X-Prize competition in 2015. Google never made it to the moon, and neither did NASA’s lunar biology experiment.

Elon Musk also famously wanted to send a greenhouse to Mars, and believed that the images of the plants sprouting on another planet would be inspirational to humanity in the same way pictures returned from the Apollo missions were. Unable to get what he considered a fair price on a rocket to Mars, he decided to just build the things himself; and a little company called SpaceX was born.

The LME received the signal to activate the water pump and begin seed germination soon after touchdown, and Chinese media started reporting on the successful sprouting of the cotton seeds on January 14th. Given a nominal ten day germination period for cotton seeds, the timeline up to that point makes sense. But just a few days later the Chinese media declared the LME experiment over; saying that the biological samples had no chance of surviving the upcoming lunar night, and that the temperatures within the device had already reached -52 C.

At this point it should be clarified that a “day” on the Moon lasts for 29.5 Earth days, a fact which was surely taken into account when the landing date for Chang’e 4 was determined. Further, we know from statements made by engineers who worked on the LME that it contains a heater; something which would be completely unnecessary during the scorching heat experienced during the lunar day.

Taking these facts into account, it seems logical to assume that the original goal was for the LME to continue functioning for at least some portion of the half-month-long lunar night cycle. The sudden announcement that the LME experiment had ended and was deemed a success on the basis of sprouted cotton seeds alone could have simply been damage control in response to some technical issue.

Indeed, some of the most recent reports from Chinese media are now saying that due to weight constraints, the batteries which were intended to power LME during the night were never installed on the spacecraft. It’s difficult to believe such an ambitious biological experiment would be sent to the Moon without the batteries necessary to power it, but as of right now, that’s the official explanation.

Inspiration, If Not Innovation

While the successful germination of a seed on the Moon is certainly a technical achievement worthy of praise, it didn’t exactly break any new ground from a biological standpoint. The LME was relatively well shielded from the outside temperature and radiation, and brought its soil, air, and water along from Earth rather than attempting to use lunar resources. The only real unknown involved was the lower gravity on the Moon, but as plants have been successfully grown in weightlessness conditions aboard orbiting spacecraft, it wasn’t likely to be a problem.

It’s debatable whether or not humanity learned anything new from the LME experiment, but that doesn’t mean it wasn’t worth doing. It might not happen on the Moon, and China might not be the one to do it. But some day, some how, we’ll get those awe inspiring pictures of green growth against the backdrop of another world that the likes of NASA and Elon Musk have been dreaming of.