If you did miss it, you can relive a lot of the landing at a really interesting site called First Men on the Moon. It isn’t a new site, but it has audio from both the ground and the spacecraft synchronized with a transcript, some graphics, video, and telemetry. Watch [Aldrin’s] heart rate when the guidance computer goes wonky (starts about 102:42). Some of the voices on the ground sound a little uptight, too. Seriously, this is one of the most amazing sites ever so if you haven’t seen it, check it out. NASA also has some interesting 3D imaging of the historic landing site, courtesy of more modern gear now orbiting the moon.

In 1960 there had never been a person in space, and barely even any man-made equipment (Sputnik launched in 1957). In 1969, some guy is stepping out on the moon. That was an amazing timeline and it made the 1968 movie 2001: A Space Oddessy seem like it was overly pessimistic about what human spaceflight would look like in 33 years. Very few people thought the space program would stall out.

Sure, we had the Space Shuttle, but it barely made orbit and certainly couldn’t go to the moon, Hollywood movies notwithstanding. We’ve had a few space stations both international and from specific countries. However, since the end of Apollo, there hasn’t been a lot of inspiring manned missions. Even the shuttle was a pared down version of an entire fleet of vehicles that NASA wanted. 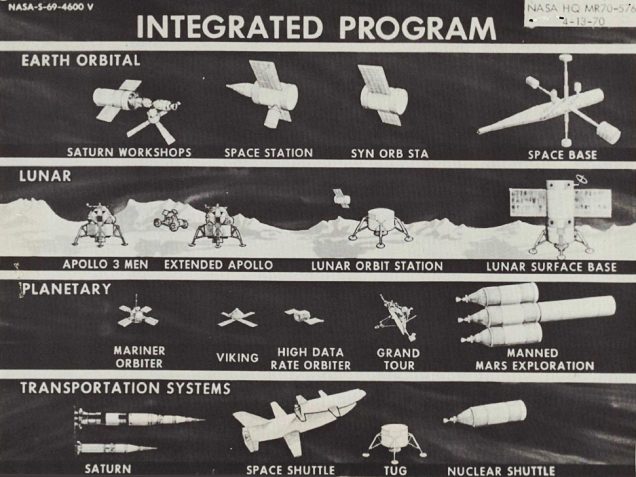 Most people who read a site like Hackaday are interested in manned spaceflight. You might not agree how one particular country or another is going about it, but I’m willing to bet the majority see the value of having humans in space. If you haven’t noticed, though, we aren’t the majority. A lot of people don’t know why we spend money in space. In addition, in the United States, polls consistently show that people think NASA has a giant chunk of the Federal budget when, in fact, it runs about 0.5% of the total up to around 1%. A 1997 poll found that on average people estimate NASA’s budget at 20% of federal expenditures. Even at the height of the space race, it was well under 5%. It’s a paradox of promoting what is a very amazing engineering program which can be appreciated by the layman, while putting the program in the crosshairs for budget cuts since people assume if it’s a household word it must cost a bundle.

There are a lot of good arguments for space. A lot of spinoff technology either came from manned spaceflight programs or were enhanced or accelerated because of the different manned programs worldwide. You can argue that we need to learn to live off the planet so we can spread out and have some resilience against an asteroid strike or screwing up the ecology permanently. We are a long way from where we could self-sustain on another planet, but you have to start somewhere and the ancillary discoveries in material science and other technologies are well worth the work.

A whole generation of engineers and scientists got interested in those subjects because we watched humanity reaching for the moon. Sure, the media made heroes out of the astronauts and cosmonauts. But we kind of knew that those men and women were supported by a legion of technical experts and innovators and — in the case of some high-profile mishaps like Apollo 13, and a Skylab incident — hackers.

We wanted to be in that legion. Well… most of us wanted to be astronauts, but reality sets in pretty early if you aren’t winning the rope climb in PE class. Some of us did go on to work on space-related projects. But a lot of us just became engineers and scientists and had productive careers somewhere else.

That’s the best reason, as far as I’m concerned. I can’t think of any one or anything that inspires young people today in quite the same way. You’d think that would be worth less than a penny per dollar in the Federal budget.

The other human reason is creating those focal points for humanity. In an age where far too often the world’s attention is only brought into a focus by a terror attack or a natural disaster, we need to see uplifting efforts to create rather than destroy. We need to bring the world’s attention to acts that are constructive and wondrous.

In the United States, manned spaceflight is going commercial, with several companies building manned vehicles to carry people to the International Space Station. That’s still not going to get us to the moon and beyond. There are plans to go to Mars, although they seemed to be stalled. The only country making big strides in manned spaceflight these days seems to be China and we applaud them for prioritizing the effort.

In 1969, no one could imagine what the reality of 2001 would be. We can’t imagine what it is going to be like in another 40 or 50 years as far as space travel goes. But one thing is certain. It will be a very long time before the events of July 20, 1969 are forgotten. It was truly one of the great moments in human history.

The moment has passed, but many of the people who made it possible are still here. If you are interested in the computers that let Apollo land on the moon, you really should read this explanation of the software from someone who helped write it. And if you can connect us with anyone else who has a story to tell about that age, we want to hear from you!

78 thoughts on “Beyond A Boot Print: The Lasting Effect Of Apollo On Humanity”