Whether intentionally or otherwise, events in the hacking community tend to be fairly segmented. You have conferences that focus on software, others that are dedicated to hardware design, and then of course the events that lean towards the InfoSec implications of it all. Before you buy a ticket, it’s usually a good idea to look at the list of talks and figure out if it’s the type of hacking you’re personally interested in or not.

But the WOPR Summit is not so easily categorized. It wasn’t a security conference, and yet there were talks focused on penetration testing and social engineering. Nor was it strictly about hardware, but it did play host to a four hour workshop that discussed how to optimize your design for manufacture. But this blend of different hacking subsets wasn’t just a stroke of good luck, it was the intention all along.

On the event’s “About” page, the organizers make it clear the goal was to try to bring some unity to the hacking community:

The mission of WOPR Summit is to provide an open and collaborative learning environment for anyone interested in developing and/or sharing their knowledge of hardware, software, and wireless technologies. We strive to bring together seemingly disparate communities. Makers, Hackers, AppSec, DevOps, Red Team, Blue Team, etc; all of us have more in common than we tend to realize.

To that end, it was a complete success. People who came for the hardware hacking stayed for some of the security talks, and vice versa. Attendees were exposed to subjects outside of their normal comfort zones, and were all the better for it. According to some of the volunteers I spoke to, in the future they hope the event will attract more talks and workshops from the maker and even artistic side of things as well; ultimately giving the event something of a Mini Maker Faire feel.

Badge Hacking on the Boardwalk

Every hacker event has to have an LED festooned badge these days, and WOPR Summit was no different. Invoking the look of the WOPR computer from “WarGames”, the badge features blinkenlights in the form of a dozen colored LEDs and eight RGB LEDs. Beyond the through-hole LEDs and resistors, the reverse of the badge is home to the battery holders and the ATtiny841 which provides the brains of the operation.

If that seems a bit simplistic in this age of increasingly outlandish conference badges, keep in mind that attendees were tasked with personally assembling these badges with minimal official guidance. Building the badges became very much a social event; with individuals of various skill levels asking their peers how they figured out which component went where, or asking for guidance when it came time to solder on the SMD microcontroller. Once assembled, an event volunteer would flash the firmware onto your badge, ultimately revealing whether or not you would be heading back to the soldering stations for some debugging.

The badge building area ended up being an excellent way to mingle with other attendees, and was definitely a highlight for many on the first day. It also made the badges a bit more unique, as no two actually looked the same; the user was left to figure out what color of LEDs they wanted to place and where.

Badge assembly was just one of the things that took place in what was referred to as the “Open Hacking Area”. Here, attendees had a chance to get hands on time with various hardware and software projects, as well as mingle with presenters after their scheduled talk or workshop had wrapped. If you were brave enough, there was even an area where you could have an RFID or NFC tag implanted in your hand, complete with some expert guidance on how you could integrate this new cybernetic implant into your digital life.

Of particular interest in the Open Hacking Area was a bank of Raspberry Pi workstations, each outfitted with a Software Defined Radio (SDR) receiver. An area like Atlantic City, which is awash with transmissions ranging from the radio chatter of security guards to the ADS-B beacons of aircraft at the nearby International Airport, provided a perfect playground for those interested in exploring the airwaves. Especially if you’d just left one of the presentations that extolled the virtues of SDR, such as Kelly Albrink’s “Ham Hacks: Breaking into Software Defined Radio.”

This was also the perfect area to simply show what you’ve been working on, and the tables were littered with projects that hackers had brought from home to show off. As you might imagine, these folks were all too happy to talk about their creations and give demonstrations to anyone who was interested.

Holding the WOPR Summit on the Atlantic City Boardwalk in March was, if you can forgive the pun, something of a gamble. On one hand, it means the organizers got a fantastic deal on what would have been a prohibitively expensive event package during the summer. On the other hand…it’s Atlantic City during the off-season. For those who might not be aware, the city largely goes into shutdown mode once the weather starts cooling off. Coupled with the rough weather of the weekend, there certainly wasn’t the level of extra curricular activities attendees may have been expecting.

That said, Bally’s Casino itself was a fine venue for WOPR Summit, and if the staff were bothered by the hackers who threw a wrench into their off-season lull, they certainly didn’t show it. If anything, the area secured for the event may have actually been too large. Given the cavernous rooms and the buffet dinner provided for attendees, I got the impression the event package was likely intended for a wedding. Not that I heard many complaints at the chow line.

There was really nothing wrong with the first WOPR Summit, but there’s certainly some areas which could be improved next year. As of this writing the team behind the event has already sent out a survey where attendees could give their feedback on the event as well as what they’d like to see at the next WOPR Summit, which is always a good sign; not listening to the people who paid money to attend your event is generally a bad idea. 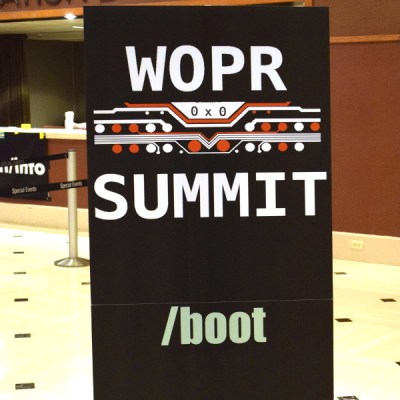 Personally, my biggest hope is that an attempt is made to record the talks at the next WOPR Summit. Granted this is one of those things that’s always easier said than done, but with nearly all of the talks taking place in the same room a single camera on a tripod doesn’t seem like it would have been that tall of an order. Given the quality of the talks presented over the two days, it’s really a shame that there’s no way to watch them online.

If WOPR Summit returns to Bally’s Casino next year, I’d also like to see better utilization of the space offered. It’s no exaggeration to say there were literally thousands of square feet available for the event, but only a small fraction was used. At the very least, adding a vendor area for next year would be an easy way to fill up some of that space.

But overall, if the worst things you can say about an event was that the venue was too luxurious and the talks were so good you wish you could watch them again, the event planners certainly must have done something right.