The Internet of Things is upon us, and with that comes a deluge of smart cameras, smart home monitors, and smart home locks. There actually aren’t many smarts in these smart conveniences, and you can easily build your own. That’s what [MakerMan] did with some off-the-shelf parts and just a little bit of code. Now he can open his door with WiFi, and it’s a nice clean build.

The build process began by first removing the existing barrel bolt on the door. This was replaced by a deadbolt that also had some really neat solenoids inside for remote activation. This was mounted to the door in a way that the door could lock, with a minimal amount of damage from some skillful hacksaw work. The only thing left to do after this was add some electronics and brains to the lock.

For this, [MakerMan] added a button and LED to the outside of the door. Some of these wires were fed into the lock mechanism, with a few more run over to a project enclosure mounted next to a power outlet. The project enclosure holds an ESP-8266, power regulator, and relay board, and the ESP is running code that instantiates a web server that will unlock the door with a few clicks on a web page.

Sure, it’s probably not the most secure lock on the planet, and the 5V linear regulator is held on to the relay board with hot glue, but this is an exceptionally well-documented project, and all the code is available in an archive.

END_OF_DOCUMENT_TOKEN_TO_BE_REPLACED

For those hosting their own git repositories there are a number of solutions for creating convenient web-accessible front ends, but [mitxela] wasn’t quite satisfied with any of them. After trying a number of alternatives and reflecting on his requirements, he realized that all he really needed was a summary page listing the latest commits, and a file tree with a list of branches and tags. To accomplish this, he created web-git-sum. It’s a bash script that runs on git’s post-receive hook and generates only two files: a summary page and an index of the repository. You can see a demo of the output at git.mitxela.com.

[mitxela]’s writeup goes into some detail on how git repositories work, how those repositories are served over HTTP, and covers a few of the different options for providing convenient and accessible web front ends. Not all repositories are alike, and what works well for one may not work or scale well for another.

Intrigued by the idea of a private git server? We covered exactly how to set one up (spoiler: it’s really easy.) 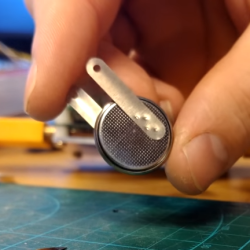 Did you ever see a thin metal tab bonded to a battery terminal with little pock marks? That’s the work of a spot welder. Spot welding is one of those processes that doesn’t offer much in the way of alternatives; either one uses a spot welder to do the job right, or one simply does without. That need is what led [Erwin Ried] to purchase a small, battery-powered spot welder from a maker in Korea and test it out on nickel strips.

The spot welder [Erwin] used is the work of a user by the name of [aulakiria] (link is Korean, machine translation here) and is designed to be portable and powered by batteries commonly used for RC. [Erwin] is delighted with the results, and demonstrates the device in the video embedded below.

Spot welder projects see a lot of DIY, some of which are successful while others are less so. Our own [Sean Boyce] even gave making a solar-powered spot welder a shot, the results of which he described as “nearly practical!”

END_OF_DOCUMENT_TOKEN_TO_BE_REPLACED

While robotic arms can handle a wide variety of tasks, the specific job at hand will have a major influence on the type of end effector used. For sorting ferromagnetic parts an electromagnet might be enough, while for more accurate location a mechanical gripper could be employed. If you’re working with particularly delicate objects or in concert with human beings, it may be desired to have a force controlled gripper to avoid damage. [James Bruton] has been whipping up a design of his own for just this purpose.

The basic gripper is 3D printed, with 3 fingers consisting of two joints each. Retraction of each finger is courtesy of bungee cord, while extension is via a servo attached to the finger through a spring. The position of each finger is measured with a resistive flex sensor. An Arduino Uno is employed to run the servos and read the attached sensors.

As force is applied by the servo, the spring begins to stretch. This leads to a greater difference between the servo position and the finger position as the applied force increases. By calculating this difference, it’s possible to determine the force applied by the fingers. This can then be used to limit the applied force of the gripper, to avoid breaking delicate objects or crushing soft, fleshy humans.

[James] notes that there are some drawbacks to the current design. The force required to move the fingers is inconsistent along their travel, and this interferes somewhat with accurate measurement. Overall though it’s a solid proof of concept and a good base for further revisions. Files are on Github for those who wish to tinker at home.

Being aware of the forces applied in mechanical settings can be key to getting good results. We’ve even seen arbor presses modified for just such a purpose. Video after the break.

END_OF_DOCUMENT_TOKEN_TO_BE_REPLACED

If you’re not familiar with the 555 timer, suffice it to say that this versatile integrated circuit is probably the most successful ever designed, and has been used in countless designs, many of which fall very far afield from the original intent. From its introduction, the legendary 555 has found favor both with professional designers and hobbyists, and continues to be used in designs from both camps. New versions of the IC are still being cranked out, and discrete versions are built for fun, a temptation I just couldn’t resist after starting this article.

If you think all 555s are the same, think again. Today, a number of manufacturers continue to produce the 555 in the original bipolar formulation as well as lower-power CMOS. While the metal can version is no longer available, the DIP-8 is still around, as are new surface-mount packages all the way down to the chip-scale. Some vendors have also started making simplified variants to reduce the pinout. Finally, you can assemble your own version from a few parts if you need something the commercial offerings won’t do, or just want a fun weekend project. In my case, I came up with what is probably the fastest 555-alike around, although I spared little expense in doing so.

Follow along for a tour of the current state of the 555, and maybe get inspired to design something entirely new with this most versatile of parts.

END_OF_DOCUMENT_TOKEN_TO_BE_REPLACED

The projects that bitluni works on have made quite a few appearances on these pages over the last couple of years. Aside from what may or may not have been a street legal electric scooter, most of them have centered around making ESP32s do interesting tricks in the analog world. He’s leveraged the DACs on the chip to create an AM radio transmitter, turned an oscilloscope into a video monitor, and output composite video. That last one was handy for turning a Sony Watchman into a retro game console. He’s also found ways for the ESP32 to output VGA signals. Looks like there’s no end to what he can make the versatile microcontroller do.

Although the conversation could (and probably will) go anywhere, we’ll start with video tricks for the ESP32 and see where it goes from there. Possible topics include:

You are, of course, encouraged to add your own questions to the discussion. You can do that by leaving a comment on the ESP32 Video Tricks Hack Chat and we’ll put that in the queue for the Hack Chat discussion.

Our Hack Chats are live community events on the Hackaday.io Hack Chat group messaging. This week we’ll be sitting down on Wednesday, March 27, at noon, Pacific time. If time zones have got you down, we have a handy time zone converter. 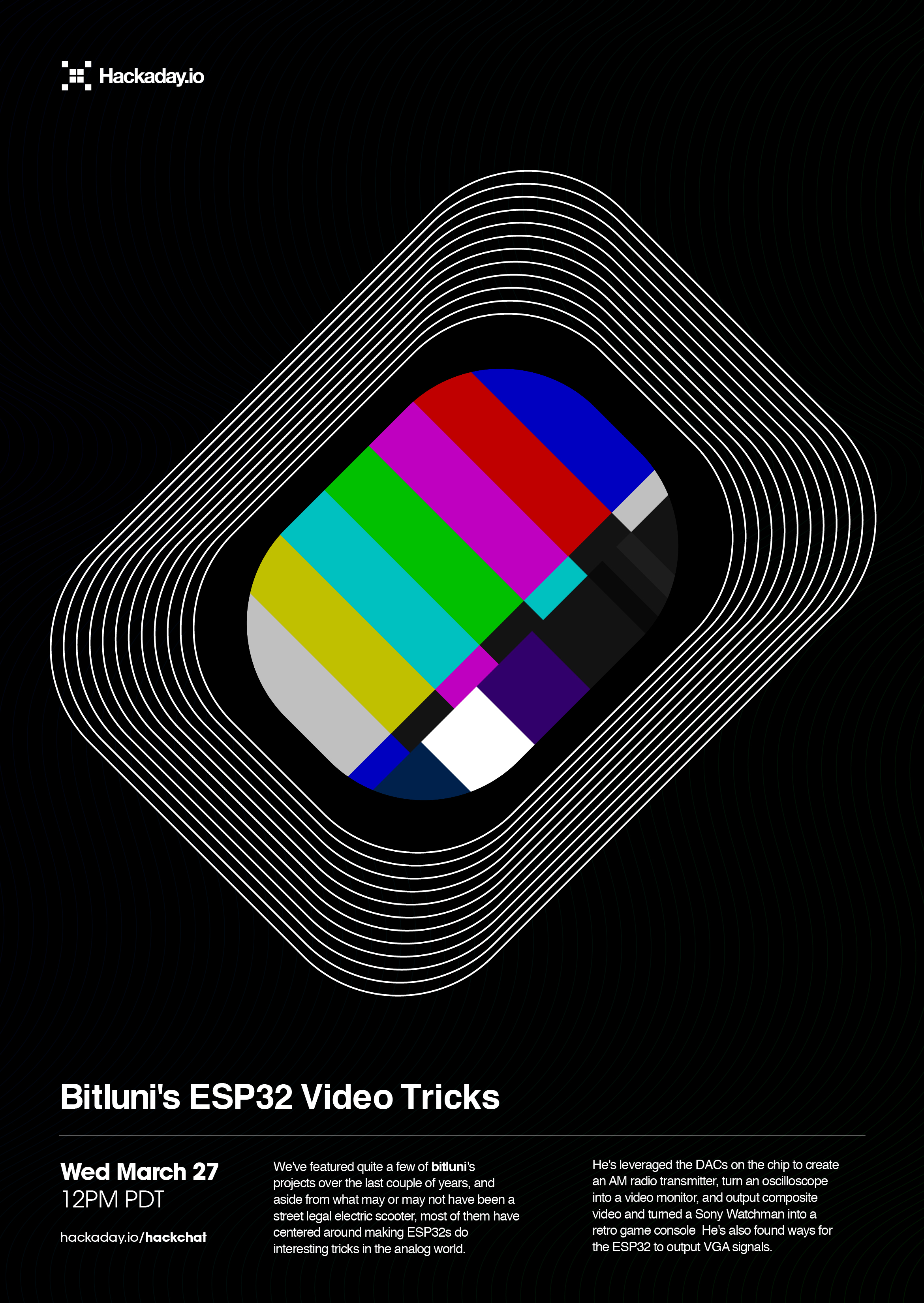