As reported by the French media, emergency response teams utilized at least two UAVs to perform reconnaissance over the burning cathedral. With imagery provided by these platforms, firefighters were able to see the intensity and movement of the fire in real-time. These UAVs were not only faster and cheaper than sending in helicopters, but their operators were able to get much closer to the fire as they were not as susceptible to the heat and smoke which would have kept manned aircraft at a respectable distance.

But as it turns out, the Paris Fire Brigade didn’t actually have UAVs of their own which could be used in this situation. They instead borrowed two commercially available models which were in service with the Ministry of the Interior and the Ministry of Culture. Both of these quadcopters, a Mavic Pro and Matrice M210, are products of the Chinese company DJI. A manufacture that’s nearly synonymous with “prosumer” aerial photography platforms, they also produce the extremely popular Phantom series of quadcopters.

The Mavic Pro is a small semi-autonomous quadcopter that DJI advertises as  being ideal for capturing high quality video at the spur of the moment thanks to a folding design which makes it much easier to transport than more traditional quadcopters. With a flight time of nearly a half-hour, a 4K camera stabilized with a three axis mechanical gimbal, and the ability to automatically track and orbit objects selected by the operator, it proved to be an ideal way of monitoring the fire from above.

Compared to the Mavic, the Matrice M210 is part of DJI’s professional line of quadcopters. Larger and more powerful, this UAV is designed to carry various payload packages such as spotlights, thermal cameras, and optical zoom cameras. There are conflicting reports as to whether or not the M210 used by the Paris Fire Brigade had the thermal camera option installed, but in any event, it would have at least given them another source of high resolution video.

It’s interesting to note that in general the operation of UAVs is strictly prohibited in Paris, and that geofencing functions built into DJI’s products would have normally prevented them from flying over Notre Dame. But DJI actually has a system in place where operators can request these limitations be lifted temporarily, which allowed the manufacturer to work quickly with the French authorities to get the UAVs airborne given the severity of the situation.

On the Shoulders of a Colossus 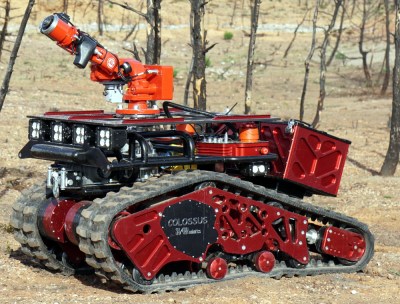 While consumer products might have been up to the task in the sky, the situation on the ground was no place for an amateur. To actually enter Notre Dame and try to battle the fire from within, the Paris Fire Brigade utilized the Colossus. This 500 kilogram tracked platform developed by Shark Robotics is essentially impervious to fire and water, and when combined with a motorized water cannon, makes a potent firefighting asset.

Colossus was especially useful during the Notre Dame fire because it was able to remain inside the structure while the roof was engulfed in flames. With flaming debris falling from above, and the ultimate collapse of the cathedral’s iconic lead-and-wood spire, the interior was a particularly dangerous area for human firefighters to operate in. Colossus was able to provide a continuous deluge of water in the church’s nave even as the structure literally fell apart around the robot, the cooling effect of which is already being credited for helping to save priceless stained glass artwork. In addition, it gave firefighters another live video feed so they could determine when it was safe enough to send in additional crews.

Cutting edge technology and robotics played a role in saving Notre Dame cathedral, and it seems likely their work isn’t done quite yet. As we’ve seen in previous disasters such as the nuclear meltdown at Fukushima Daiichi plant in Japan, robots could be called in to survey the structural integrity of areas which are too dangerous for human workers. From the air, UAVs with high-resolution cameras will be able to rapidly image the entire site, which could be used to create a three dimensional model of the structure through photogrammetry; aiding in the eventual design of a modern roof which blends into the original stonework.

In order to restore Notre Dame within the ambitious five year timeline given by President Macron while maintaining a safe working environment for the thousands of workers which will be involved in the project, no option will be off the table. The people of France have been galvanized by this event, and before it’s all said and done, we may see new cutting-edge solutions specifically developed for the unique challenges of this reconstruction. The burning of Notre Dame may be a tragedy of historic proportions, but the lessons it will teach us could benefit the world in ways that today we can’t even imagine.