It was foolish to think that the adventure of the Mario Bros. would ever exist outside of the castle walls of the Nintendo Entertainment System. Except for that one time it did. The Hudson Soft company was a close collaborator with Nintendo, and parlayed that favor into being tasked with bringing Super Mario Bros. to platforms beyond the NES. The result of that collaboration would be 1986’s Super Mario Special, a port for the NEC PC-88 line of desktop computers. What ended up on that 5.25″ floppy sounded reminiscent of the Famicom original, but with a grand total of four colors (including black) and not a single scrolling screen in sight; Super Mario Special felt decidedly less than spectacular to play. Those eternally flickering sprites mixed with jarring blank screen transitions would never make it outside of Japan, so for a large swath of the world Mario would remain constrained to a gray plastic cartridge for years to come.

There are no shortage of ways to play Super Mario Bros. these days. Emulation in all of its various official and unofficial forms has taken care of that. Virtually everything with a processor more capable than the NES’s 6502 can play host to the Mushroom Kingdom, however, machines more contemporary with the NES still lacked access to the iconic title.

Enter the 2019 port of Super Mario Bros. for the Commodore 64 by [ZeroPaige]. A culmination of seven years work to port the game onto one of the most prolific computers of the eighties was a clear feat of brilliance and an amazing bit of programming that would have taken 1986 by storm. No pale imitation, this was Mario on the C64. Despite all of the nuance in recreating the jump-and-run model of the original paired with enveloping all eight sound channels of a dual SID chip setup, Nintendo saw fit to stifle the proliferation of this incredible 170 kB of software because they claim it infringes on their copyright.

Please Cease and Desist from Building that Pokédex

Pokémon games have come out on Nintendo consoles like clockwork since their inception in 1996. The development team’s conservative approach to game design over the years has had the adverse effect that sequels feeling increasingly rote to long-time fans. Each new entry in the mainline series has staunchly adhered to the original’s winning formula albeit with diminishing returns. Sales have seen a downward trend inconsistent with the accompanying console’s install base. All the while, mounting feedback from the community of Pokémon players has surfaced one constant refrain, “Please just make the Pokémon MMO”.

Nintendo has long held a reticence to incorporating the connecting power of the internet to their games. Their broadband adapter for the Nintendo GameCube was supported by a whopping seven of the console’s nearly six hundred releases. When it came to their other “online” consoles/handhelds the company opted for the convoluted Friend Code system rather than the simplicity of screen names used literally everywhere else online. This heaping mess of decisions lead to a handful of fan developers banding together to create their own open source Pokémon multiplayer vision, Pokénet.

The mission of the Pokénet project was to create a online game that would allow players to connect to the same server in order to converse each other en mass while traveling across all of Pokémon’s fictional regions. The project pulled assets from multiple official Pokémon releases, so almost as soon as it appeared Pokénet was shutdown after being issued a cease and desist letter from Nintendo in 2010. Before being shutdown though, thousands had experienced what online connectivity could add to the game franchise; only to find that official offerings ignored this “feedback” from its fans altogether. This same cycle has continued to this day within Nintendo, but there are examples of other companies that have explored an alternative approach to bootleg tributes to beloved videogames.

The Taxman Cometh for Sonic Team

Sonic the Hedgehog fandom runs deep. The blue blur character has been a staple in games since the early 1990s, and has received a regular cadence of sequels released to ever-decreasing levels of critical acclaim. The developers of the Sonic games, Sonic Team, sought to return to basics with the announcement of Sonic the Hedgehog 4 in 2010. The game was planned as a classic 2D design to be released episodically, the problem was that no one cared. Panned by critics and fans alike, Sonic the Hedgehog 4 saw only two episodes release before being cancelled. Sonic Team’s grand vision to reform the franchise had failed. 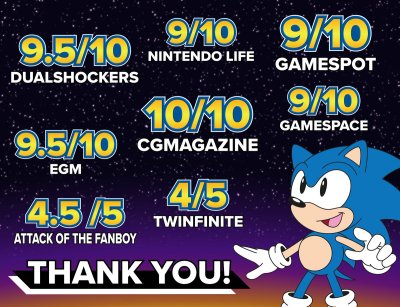 Meanwhile, hardcore Sonic enthusiasts had not forgotten the series’ roots. An online development community called, Sonic Retro, had hosted a number of homebrew game contests dedicated to keeping 1990s Sonic games alive. Christian Whitehead, a.k.a. Sonic Retro forum user [Taxman], took part in one of the Sonic homebrew game contests and gained notoriety for his creation simply known as the Retro Engine. Whitehead went on to pitch SEGA a port of their own game, Sonic CD, for iOS that utilized the Retro engine. It worked. Sonic CD was ported to multiple modern platforms and received high praise from fellow fans in the the process.

After a number of other successful Sonic game ports, Whitehead was asked to helm a wholly original Sonic game in the classic 2D style. This project as Sonic Mania. Released in 2017, Sonic Mania was the highest rated Sonic game amongst videogame critics in twenty five years. It surpassed Sonic Team’s own release that same year, Sonic Forces. The fan made game resonated with Sonic fans far better than anything put out by the folks with the character emblazoned on their official business cards.

And that brings us back to Super Mario. There’s a level of skill on display with that Super Mario Bros. port for Commodore 64 that is rarely seen. Taking into account the inherent limitations of microcomputers contemporaneous with the NES shows how expertly that clone was programed. And because of Nintendo’s lawyers, if you don’t already have a copy, you’re going to have to make do with the video below.

“By Commodore 64 standards, this is [expletive] insane. In terms of how well it animates, sounds, and plays…It doesn’t sound like a Commodore, and they put the fireworks in.”

There is a canyon between it and the official Super Mario Special, and the difference between the two is the amount of time and passion. Fans possess time and passion in spades, and embracing it has proven to yield incredible results. Maybe instead of seeking to silence those less-than-official projects with a flurry of cease and desist notices that same energy could be focused towards cooperation between copiers and copyright holders. After all, it worked for Sonic.

51 thoughts on “That Super Mario Bros. C64 Port Was Too Good For This World”