Nuclear fission plants are simple to understand because, at their core, they are just conventional steam generators. There is usually a clean water loop that gets heated to steam, turns a turbine, and that spins a conventional generator. If I told you the heating occurs through burning coal, natural gas, or some other fuel, this would describe a typical power generator — save hydroelectric, which uses water pressure to run the turbine.

In a typical nuclear plant, the water is heated by another steam/water loop. This primary loop uses a coolant that will become radioactive and draws heat from the nuclear core. The heat from this coolant is used to create steam in the clean water loop. There are a few reactors that use the core’s heat to directly boil the water, but that’s unusual. There are a few other less common designs. For example, one “breeder” reactor type, not only uses what amounts to solder (lead and bismuth) as a coolant but also produces more fuel than it consumes.

Why does the core get hot? Uranium breaks apart occasionally. If you have enough uranium, it is likely those particles will strike other uranium atoms causing them to break down. Heat comes from the radioactive decay process, along with the energy caused by particles colliding. In addition, the reactor will absorb some gamma radiation causing heating.

Speaking of fuel, if you’ve ever wondered why nuclear is so interesting compared to conventional power plants, you only have to look at the energy output from one pound of fuel. In theory, 1 kg of coal can produce about 8 kWh. Complete fission of 1 kg of uranium-235 can produce 24,000,000 kWh. That’s not a misprint. That’s 24 million kWH! So uranium produces about 3 million times more power than the same amount of coal. You can get an idea of what this really means by clicking the adjacent infographic from the US Department of Energy. According to it, a typical nuclear reactor could light about 100 million LED bulbs or replace over 3 million solar panels.

Typical power plants have been huge, but that’s not a necessary feature of nuclear reactors. After all, many submarines and ships use reactors, so it is clearly possible to make them where they don’t require acres of area. The reasons for big power plants are economic, not technical. 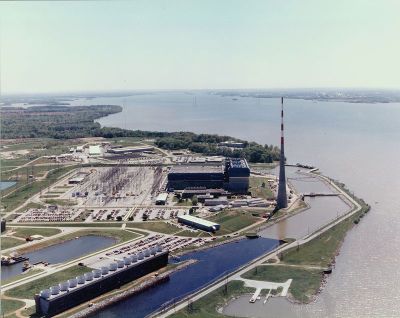 For one thing, the cost of getting a plant approved is enormous. So you might as well do several at once. You can also get some economy with control rooms, although some of that led to trouble in the past (that’s the Brown’s Ferry plant in the adjacent picture). Highly reliable control systems are also not cheap. It makes sense to have as much of the fixed costs divided by a number of operating reactors to control costs.

Of course, things going wrong is why people don’t like nuclear power. There are several problems, including what to do with the fuel when it is spent but still radioactive. However, the problem people fear most is the core melting down. The problem is that as radioactive decay causes more decay, it can lead to an avalanche effect. So one particle splits off two particles, which go on to split off four until, very quickly, you have millions of particles with no end in sight.

So you have to have a way to carry off the normal amount of heat, and you also have to have a way to moderate the atomic reaction. This can be done by introducing material that doesn’t permit fission to more or less absorb some of the particles flying around without producing more. Water is a common moderator. Graphite and heavy water are a few of the other choices. Typically, the reactor has a way to introduce more or less moderation to maintain a particular temperature. For example, a graphite control rod could be barely inside the core, but later lowered to absorb more neutrons. Dropping the rod all the way in — possibly because the control electricity failed — could stop the nuclear reaction altogether. In smaller reactors where rods are not practical, it is possible to use a neutron poison to accomplish a similar effect. 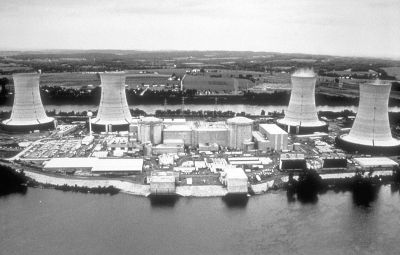 Without the moderation, typically, the core temperature would increase to a very high temperature. While that might seem like a good thing, it is too much of a good thing. The equipment in the reactor can only stand a certain amount of heat. In particular, all the radioactive material is usually inside a containment building, and if that melts, you will have a catastrophe on your hand. This is essentially what happened at Chernobyl, but that reactor did not have a containment structure around the reactor’s pressure vessel.

Fukushima had partial meltdowns and Three Mile Island (pictured) did, too. Melting through the containment structure is one bad thing that can happen but there are other concerns, too. As the fuel and its surrounding materials melt, they can form hydrogen gas which can then blow up spectacularly. Again, if the containment vessel breaches, radioactive material can be spread.

So what makes the NuScale reactors different? First, they are small and contain enough fuel to operate for about two years. The idea is to put more smaller reactors in place — up to twelve — if you need more power. Because they are small, they can be mostly built offsite and shipped into a prepared location. This is similar to the idea of prefabricated housing and should reduce costs.

However, it is expensive to control many smaller reactors compared to a few large reactors. NuScale says the reactors are passively cooled, so the control system isn’t as important. A typical way a meltdown might occur is when a cooling pump fails or is de-energized. The temperature will increase rapidly and — in many cases, even if the reactor is quenched by inserting all of the moderators, the heat will continue to build up if there is no way to remove it.

Passive cooling sidesteps this. According to NuScale, if you turn off all the control electronics, the passive water cooling is sufficient to keep the reactor safe. Critics, however, say that NuScale still needs to follow the rules. NuScale says that because the reactors are inherently safe, they should be able to get waivers to some of the rules that would drive high costs.

Small is a relative term. Each module is 65 feet tall by 9 feet in diameter and weighs about 700 tons, which requires it to be shipped in three parts. The containment building is 76 feet by 15 feet. According to NuScale, each module can generate 60 MW using a light water configuration and a pack of enriched fuel rods that are about six feet long. If you put in all 12 modules in you could get — in theory — 720 MW from the plant.

As a point of reference, of the 98 currently operating reactors in the United States, the smallest is in New York and can generate 582 MW. The largest is in Arizona and with three reactors can put out nearly 4,000 MW. The largest in the world resides in Japan and produces 8,000 MW. It uses 7 reactors, each with a gross capacity between 1,100 and 1,356 MW — about 20 times that of the NuScale device. In case you are curious, the big reactor in Arizona doesn’t even make the top ten list for the world.

NuScale apparently has a deal to build a pilot plant at the Idaho National Laboratory. We’ve also heard there are similar designs in China and Russia. However, some people point out that small reactors have been around since the earliest days of nuclear power. The Army and Air Force gave up on small reactors. Once placed in Antartica had myriad problems and required removing almost 15,000 metric tons of contaminated soil. The Navy didn’t mind the cost because the reactors allowed them to have an operational advantage, but they didn’t adopt them for their economy.

Still, a lot of technology has changed. Maybe small reactors will catch on this time around. Is it safe? We don’t know. The company claims that if you do nothing it will stay safe indefinitely with no power or additional water. Then again, the Titanic was unsinkable.

In general, we like nuclear power — as long as it is safe. We know, though, a lot of people will categorically eschew anything nuclear. That’s why the medical industry dropped the word nuclear from NMR (nuclear magnetic resonance) and now call it MRI (magnetic resonance imaging) because even though nuclear in that phrase means something totally different, people were afraid.

What do you think? Should we do any sort of nuclear power? Is it possible small reactors are the answer? Or do we stick with things like wind and solar which have far less generating capacity but are — at least on the face of it — much safer. Leave your thoughts in the comments.

175 thoughts on “Atomic Power Gets Small”