You may have noticed, we’re fans of the Raspberry Pi here at Hackaday. Hardly a day goes by that we don’t feature a hack that uses a Pi somewhere in the build. As useful as the Pis are, they aren’t entirely without fault. We’ve talked about the problems with the PoE hat, and multiple articles about keeping SD cards alive. But a new failure mode has popped that is sometimes, but not always, caused by shorting the two power rails on the board.

The Pi 3 B+ has a new PMIC (Power Management Integrated Circuit) made by MaxLinear. This chip, the MxL7704, is a big part of how the Raspberry Pi foundation managed to make the upgrades to the Pi 3 without raising the price over $35.

A quick look at the Raspberry Pi forum shows that some users have been experiencing a specific problem with their new Raspberry Pi 3 B+ units, where the power LED will illuminate but the unit will not boot. The giveaway is zero voltage on the 3v3 pin. It’s a common enough problem that it’s even mentioned in the official boot problems thread.

Make sure the probe you are measuring with does not slip, and simultaneously touches any of the other GPIO pins, as that might instantly destroy your PI, especially shorting the 3V3 pin to the 5V pin will prove to be fatal.

Word From the Top: We’re Working On It

After experiencing this failure mode first-hand I decided to investigate. I reached out to the Raspberry Pi Foundation, and got a response directly from Eben Upton about the issue. He confirmed that there is a known issue: Shorting the 5V and 3V3 pins of the Raspberry Pi 3 B+ will permanently damage the PMIC. Of course shorting out power rails is a user error, but since it’s a mistake encountered by quite a few of us, they’re working on a way to fix the issue.

The interesting thing is that Eben acknowledged that a few people have experienced this failure without shorting the power pins, but it’s proven extremely difficult to troubleshoot. They are in search of someone who can reliably replicate the 3V3 failure without simply shorting the power pins. Eben even said “I would fly an engineer anywhere in the world to meet someone who can do this.” It’s not hard to see why this failure mode is so hard to track down — you can only perform it once and then the damage is done. Here’s their contact form if you happen to have info that can help.

This PMIC Fault is Not User Serviceable 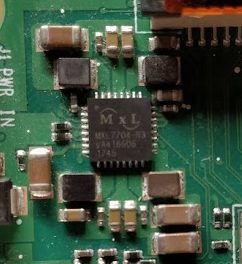 The official solution to a 3V3 line failure is to contact the distributor and request a replacement Pi. The MxL7704 is officially considered not a user serviceable part. That’s obviously not enough to stop us, so I thought I’d try swapping out the bad chip for a replacement.

The MxL7704 is available through Mouser, so I ordered a couple and tried my hand at replacing the chip. Even with a hot air rework station, soldering the 0.5 mm pitch chip was too fine for me to master for this project. I discussed this with Eben and he mentioned that the chip from Mouser isn’t actually a drop-in replacement for the one on the Raspberry Pi, and suggested replacing the chip with one from a working Pi 3a+. It’s not clear to me if there are actual silicon changes, or if the differences are all in the i2c programming of the PMIC.

For all you Pi 3+ owners out there, be careful you don’t accidentally short pins on the new Raspberry Pis, as it will almost certainly brick the device. If you manage to recover your Pi by swapping out the PMIC, be sure to let us know!

150 thoughts on “Shorting Pins On A Raspberry Pi Is A Bad Idea; PMIC Failures Under Investigation”