Most people buy expensive cameras and use them rather than taking them apart, but Linus Tech Tips has a different approach. They decided that they would rather take the camera apart, with a view to converting it to water cooling. Why? Well, that’s perhaps like asking why climb Mount Everest: because it is there. The practicality (or desirability) of water-cooling an 8K camera aside, the teardown is rather interesting from an an engineering point of view. The RED HELIUM 8K costs about $25K, and most of us don’t often get a look inside equipment like this.

The video that we’ve placed below is, as you might expect, more about the horror of tearing the thing apart than the real details, but you do get some insight. There seem to be at least five different PCBS and a while mess of ribbon cables between them.  A lot of the camera brains seems to be in the form of Kintex FPGA chips, some of the more powerful ones in the Xilinx lineup. At $1600 each, that’s probably a big chunk of the cost of the camera right there. 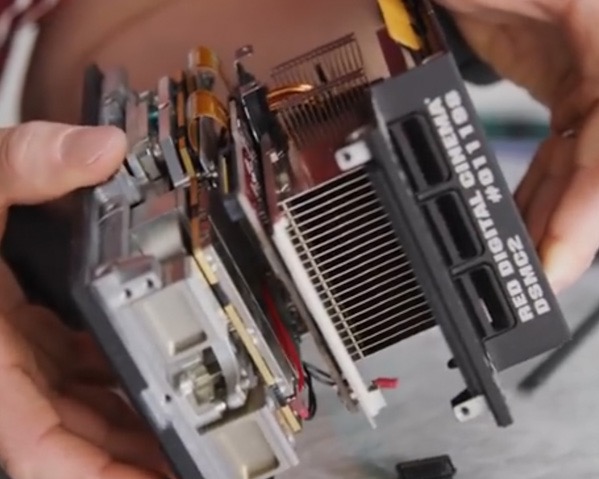 The current cooling system of the camera is also somewhat crazy looking, with multiple heat pipes pulling heat from the multiple PCBS, each holding large FPGA chips to a ducted radiator at the back. There’s a huge amount of thermal grease in there.

Perhaps this huge heat sink makes more sense than you might think at first, though: the RED camera turns off the fans while shooting to avoid noise, so the system has to absorb a lot of heat while shooting, then dissipate it afterwards quickly before it has to switch to silent running again. 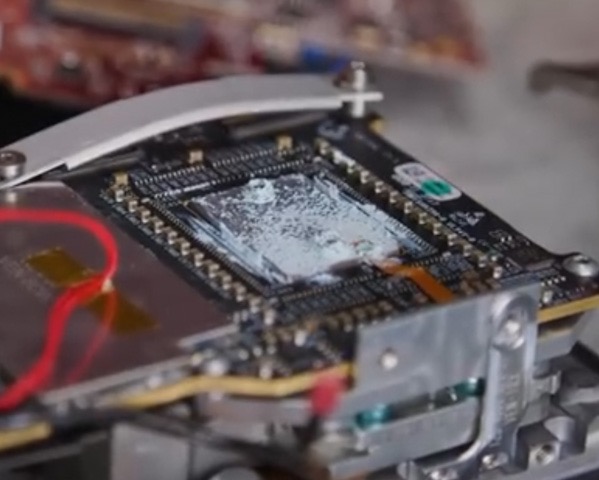 There is also a rather odd-looking arrangement for cooling the sensor chip. It looks as though the heat sync works through a hole in the PCB, possibly with a Peltier or similar pulling heat from the back of the chip. Any more insight from this? Would any of those who are experts with this kind of system want to let us know what they see?