By pretty much any metric you care to use, the last couple of decades has been very good for the open source movement. There was plenty of pushback in the early days, back when the only people passionate about the idea were the Graybeards in the IT department. But as time went on, more and more developers and eventually companies saw the benefit of sharing what they were working on. Today, open source is effectively the law of the land in many fields, and you don’t have to look far to find the community openly denouncing groups who are keeping their source under lock and key.

In the last few years, we’ve even seen the idea gain traction in the hardware field. While it’s not nearly as prevalent as opening up the software side of things, today it’s not uncommon to see hardware schematics and PCB design files included in project documentation. So not only can you download an open source operating system, web browser, and office suite, but you can also pull down all the information you need to build everything from a handheld game system to an autonomous submarine.

With so many projects pulling back the curtain, it’s not unreasonable to wonder where the limits are. There’s understandably some concerns about the emerging field of biohacking, and anyone with a decent 3D printer can download the files necessary to produce a rudimentary firearm. Now that the open source genie is out of the bottle, it seems there’s precious little that you can’t download from your favorite repository.

Scratching an exceptionally surprising entry off that list is Transatomic, who late last year uploaded the design for their TAP-520 nuclear reactor to GitHub. That’s right, now anyone with git, some uranium, and a few billion dollars of seed money can have their very own Molten Salt Reactor (MSR). Well, that was the idea at least.

So six months after Transatomic dumped a little under 100 MB worth of reactor documentation on GitHub, is the world any closer to forkable nuclear power? Let’s find out.

Founded by MIT alumni Dr. Leslie Dewan and Mark Massie in 2011, Transatomic originally intended to manufacture the reactors themselves. Their designs promised to be safer and more energy efficient than contemporary methods of nuclear fission by utilizing a concept from the 1960s known as the Waste Annihilating Molten Salt Reactor (WAMSR).

The idea is that such a reactor could extract additional energy out of the “spent” nuclear fuel from other reactors. Additionally, by using molten salt rather than water as the reactor coolant, it eliminates the possibility of a Chernobyl-style steam explosion should the cooling pumps fail. Safer, cheaper, and more efficient, a perfected WAMSR could be a revolution in nuclear power generation.

Unfortunately for Transatomic, their design didn’t work. At least, not entirely. In 2016, the company realized they made mistakes in their original calculations which meant that the reactor couldn’t actually run on spent nuclear fuel as originally envisioned. Without the promised ability to consume what would otherwise be nuclear waste, interest in the design waned, and by 2018 Transatomic decided to suspend operations.

While the reactors wouldn’t be able to gobble up nuclear waste like they had hoped, Dr. Dewan still thought their core MSR design was worthy of consideration for other companies which might have the capital to actually build it. In a post on the company’s website, she announced that the company would begin looking into the logistics of releasing their designs to the public:

We’re extremely proud of the great scientific and engineering work we’ve done over the past seven years, and want to make sure that it can continue to further the development of the next generation of nuclear reactors. We will therefore be open-sourcing our intellectual property, making it available for any researchers – private, public, or non-profit – who want to continue the work we’ve started.

As promised, Transatomic did release a trove of documents to GitHub a few months after the announcement that they were shutting down their reactor development program. But it’s important to remember that the design was nowhere near the point where it could actually be constructed; it was still very much in the planning stages when they realized it couldn’t meet their goals.

So what the company eventually released is quite a bit different than what the average Hackaday reader might be expecting when they hear about a nuclear reactor design going open source. If you were hoping for circuit diagrams or some source code, you’ll want to temper your expectations. 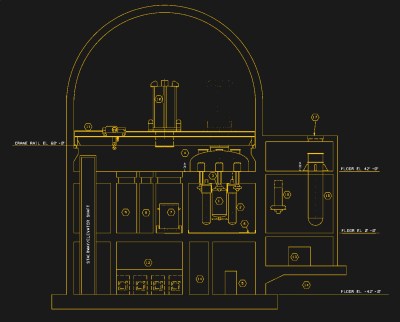 The closest thing you’ll get in the repository is a series of PDF “blueprints” that in many cases appear to be only a step above block diagrams. There are a couple illustrative cutaways in the various white papers which make up the information dump, and the details on the theoretical design are fascinating enough if you’re into that sort of thing. But don’t think you’ll be coming away from the experience any closer to building a functioning nuclear reactor than you are currently.

Arguably, one of the most interesting aspects of the release is the GitHub community’s response. With more than 570 stars and nearly 60 forks at the time of this writing, the aptly named “reactor” repository has certainly gained some attention. Unfortunately, none of those forks actually have any activity, not that we think anyone at Transatomic was holding out hope that one of them would generate a Pull Request to fix their fuel consumption issues.

The repository is also subject to the same nagging logistical issues that we’ve seen time and time again on GitHub. Someone had to remind Transatomic to add a license file, and there’s currently an open Issue that asks if editable CAD files can be added in addition to the PDFs. It’s somehow comforting to know that even nuclear physicists have trouble putting together a decent README.

The last commit to the “reactor” repository was in December of 2018, right around the time Transatomic’s Twitter account went dark. At this point, it’s probably safe to assume the world has gotten all the information it’s going to get out of the company. As promised they released the data they’d accumulated after seven years of research under an open source license, but from an outsider’s perspective, the biggest surprise is perhaps how little material that actually amounted to.

Realistically, there’s very little that even the most driven hacker could glean from the Transatomic files. It’s the same thing that keeps the 3D models NASA has released of their Mars rovers from helping you jump-start your own mission to the Red Planet; the prerequisites required to capitalize on the technology are simply too high. While it’s likely that some nuclear energy whitepaper of the future will reference these documents as part of their research, nothing contained within them will help the next “Nuclear Boy Scout” on their mission. Which is probably a good thing, given how such endeavours have gone in the past.

In the end, one has to wonder if things would have gone differently had Transatomic operated with this level of transparency from the beginning. Rather than wasting years working on a fundamentally flawed concept, opening up their designs for peer review from the start could have allowed them to address the issue before it was too late. Unfortunately for Transatomic, and perhaps the world, that’s a question we’ll never know the answer to.

43 thoughts on “You Wouldn’t Download A Nuclear Reactor, But Could You?”