The term “Nightmare Fuel” is Internet-speak for something that’s so terrible that you’ll lose sleep just looking at it. In the case of hydrazine, that’s not very far off. If this high-level summary of the dangers of hydrazine by the United States Environmental Protection Agency isn’t enough to give you pause, you’re either very brave or very foolish:

Symptoms of acute (short-term) exposure to high levels of hydrazine may include irritation of the eyes, nose, and throat, dizziness, headache, nausea, pulmonary edema, seizures, and coma in humans. Acute exposure can also damage the liver, kidneys, and central nervous system in humans. The liquid is corrosive and may produce dermatitis from skin contact in humans and animals. Effects to the lungs, liver, spleen, and thyroid have been reported in animals chronically (long-term) exposed to hydrazine via inhalation. EPA has classified hydrazine as a Group B2, probable human carcinogen.

That’s a risk of central nervous system damage and coma from short term exposure. But of course, that’s just talking about what happens if it leaks or spills around humans. What happens if there’s an explosion, and the hydrazine fills the air? The situation goes from bad to far, far worse.

In October of 1960, a prototype R-16 intercontinental ballistic missile fueled by a derivative of hydrazine exploded on the launch pad at the Baikonur test range in the Soviet Union. Between the monstrous force of the explosion and the deadly fumes which engulfed anyone who survived the initial blast, 78 lives were lost. The incident, known as the “Nedelin Catastrophe“, helped earn the R-16’s specific blend of nitric acid and hydrazine the nickname Devil’s Venom.

So given how dangerous hydrazine is, why do we keep using it? The simple answer is, it’s an exceptionally versatile rocket fuel. Some formulations of it are used as a hypergolic propellant, which means it will ignite immediately when combined with an oxidizer such as dinitrogen tetroxide. It can also be used as a monopropellant, where it gets passed through a catalyst bed that instantly breaks it down into a large volume of hot gas. In either form it’s extremely reliable and stable enough to be stored indefinitely.

To be clear, AF-M315E isn’t intended to replace hydrazine in hypergolic engines like those on the SpaceX Crew Dragon. Rather, it’s designed to replace hydrazine when used as a monopropellant. As that’s how it’s more commonly used on American vehicles, NASA doesn’t see that as a limitation. Monopropellant thrusters are generally used on spacecraft for maneuvering and performing orbit adjustments, though they are occasionally used in more exciting applications. For instance, hydrazine monopropellant was used in the “Sky Crane” that delivered the Curiosity rover to the Martian surface.

So how does AF-M315E compare with hydrazine as a monopropellant? At least on paper, very well. Testing has shown that it’s more efficient, offering a 12% higher specific impulse (ISP). It’s also 45% denser than hydrazine, which means you can either bring more of it in the same sized tanks, or simply load less of it onto your craft and enjoy the mass savings. As a practical example, Aerojet Rocketdyne estimated that using AF-M315E instead of hydrazine on Curiosity’s descent thrusters would have allowed adding an additional 58 kilograms of payload onto the rover; an increase of around 6%.

Based on the improved performance alone, AF-M315E would be worth looking into as an eventual replacement to hydrazine. But the biggest advantage is how much safer it is for the humans who have to work with it. While it’s not exactly inert, handling AF-M315E only requires the sort of equipment you might use when working with a strong acid: gloves and a face shield. Compared to the full-body hazmat suits required when working with hydrazine, being able to perform propellant loading in this so-called “shirt sleeve” environment would be a minor revolution in how we prepare spacecraft for flight.

If your spacecraft runs on hydrazine, it has to be transported with empty tanks and fueled prior to liftoff by a group of trained professionals in a secured location. This is not only a slow process, but an expensive one: filling even a small spacecraft’s tanks with hydrazine will easily add a six-figure line item to your budget.

But AF-M315E promises to change this paradigm completely. The propellant can be stored in plastic or glass bottles, and can be shipped through carriers such as FedEx. Any company, college, or even hackerspace, that has the technical ability to produce a CubeSat would also be able to safely load AF-M315E into their vehicle. The Department of Transportation is even looking at allowing craft filled with AF-M315E to be transported on public roads.

Not only would in-house fueling make building small spacecraft cheaper, but it would also reduce the workload for ground processing personnel at the launch site. Overall, this leads to less time on the ground and more time in space.

Luckily, we won’t have to wait too long before we know if this new propellant can deliver on its promises. On June 25th, a small satellite manufactured by Ball Aerospace and bristling with AF-M315E thrusters hitched a ride to space on SpaceX’s Falcon Heavy. It will spend a little more than a year in orbit, testing the performance of these thrusters and verifying everything works as expected. 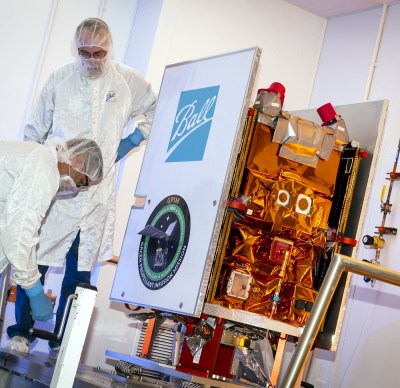 As this is the first AF-M315E powered spacecraft in history, there’s plenty of unknowns to contend with. One of the main goals of the test is to see how the thrusters respond after sitting dormant for months on end. Since a spacecraft only fires its thrusters when necessary, it’s not uncommon to go months or perhaps even years between burns. Any propellant that hopes to dethrone hydrazine will need to be able to meet its ability to roar into action at a moment’s notice.

Even assuming everything goes well with this first GPIM mission, we won’t be rid of hydrazine overnight. As nasty as it is, manufacturers have decades of experience with it and have long since come to terms with the risks involved in handling it. The increased performance of AF-M315E will probably help convince aerospace manufacturers that it’s worth looking into converting their designs over to this new “green” propellent, but it may ultimately take pressure from the customer to get the ball rolling. Once the companies buying and operating these craft realize the time and money that can be saved by using a different fuel, you can be sure they’ll take it into account when shopping around for their next satellite.