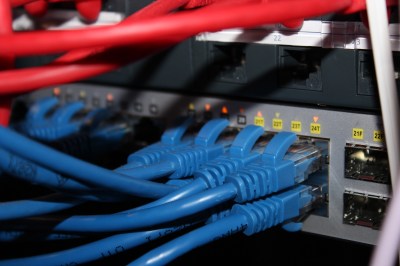 Perhaps the most common usage of the term bandwidth is for the data bandwidth of digital channels, in other words, the rate of information transfer. In this case, it’s measured in bits per second. Your ISP might provision you 50/10 Mbps internet service for example, meaning you have 50 million bits per second of download capacity and 10 million bits per second of upload. In this case you would say that the download bandwidth is 50 Mbps. Measuring the digital bandwidth of a network channel is as easy as sending a fixed number of bits and timing how long it takes; this is what those broadband speed test sites do.

We’ll come back to digital bandwidth in a little while, to see how it’s connected to the next concept, that of signal bandwidth. 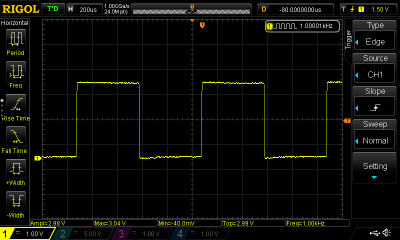 The term bandwidth is also used to describe the frequency range occupied by a signal. In this case, the bandwidth of the signal is defined as the maximum frequency contained in the signal minus the minimum frequency. If a signal has frequency components between 100 Hz and 300 Hz, we would say that the signal has a bandwidth of 200 Hz. As a concrete example, consider the medium-wave (aka AM) broadcast band in the US: each signal occupies a bandwidth of 20.4 kHz. So, a transmitter operating on the 1000 kHz channel should only output frequencies between 989.8 kHz and 1010.2 kHz. It’s interesting to note that an AM-modulated RF signal takes up twice the bandwidth of the transmitted audio, since both frequency sidebands are present; that 20.4 kHz RF bandwidth is being used to send audio with a maximum bandwidth of 10.2 kHz.

While the definition of bandwidth seems very straightforward, sometimes the application to common signals can be confusing. Consider an ideal square wave at 1 kHz. This signal repeats at a frequency of 1 kHz, so we might assume that it has a bandwidth of 1 kHz. In fact, an ideal square wave contains components at all odd multiples of the fundamental frequency, in this case at 3 kHz, 5 kHz, 7 kHz, etc. The practical upper limit, which determines the bandwidth of the signal, depends on how “ideal” the square wave is — in other words, the sharpness of the edges. While the amplitude of these components falls with increasing order, they’re important for properly constructing the original waveform. In fact, a common way to generate a sine wave is to filter out the higher-order components of a square wave signal.

Given a signal, how do we determine its bandwidth? The plain old telephone service (POTS) of my youth, for instance, passed frequencies between 300 Hz and 3000 Hz, which was found to be sufficient for voice communications; we might say signals passing through this system were limited to a bandwidth of 2700 Hz. While this would be true if the POTS system had sharp frequency edges, in reality, the signals passing through will have some small components below 300 Hz and above 3000 Hz. Because of this, it’s more common to define a non-zero threshold for the edges of the band. For instance, in measuring the highest and lowest frequencies in a signal, we might use the frequencies where the signal power is half of it’s peak value, or – 3 dB, corresponding to 70.71% in amplitude terms. While 3 dB is by far the most common value, you’ll find others used as well. 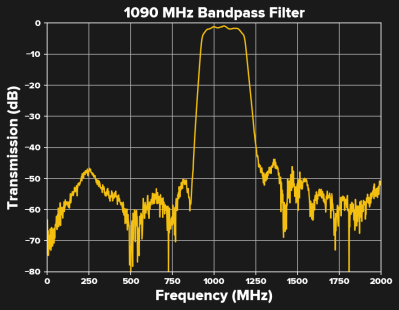 A third use of the term bandwidth is to describe the range of frequencies passed by a system, such as a filter, amplifier, or the telephone system described above. While a particular signal passing through the system may have a quite narrow bandwidth — a nearly-pure sine wave at around 2600 Hz with a bandwidth of just a few Hz, for instance — the system itself still has a bandwidth of 2700 Hz. As with signal bandwidth, system bandwidth can be measured at 3 dB points (where the signals passed by the system have dropped to half power), or using other thresholds — 6 dB and 20 dB might be used for certain filters.

For another practical example, consider an oscilloscope — the “X MHz” in the scope specifications refers to the bandwidth, and this is almost always measured at the -3 dB point. The front-end amplifier of a 100 MHz oscilloscope will pass frequencies between 0 Hz (DC) and 100 MHz with 3 dB loss or less. This means that a 100 MHz sine wave may only show 71% of its actual amplitude, but also that frequencies somewhat above 100 MHz can be viewed — they’ll just be reduced in amplitude even more. The other consequence is that a 100 MHz square wave will look like a sine wave on a 100 MHz scope; to get an accurate picture of the square wave, the scope must have a bandwidth greater than about five times the square wave fundamental frequency. The 100 MHz oscilloscope is best used for observing square waves of 20 MHz or less.

Oscilloscope bandwidth is commonly assessed by measuring the rise time of a very fast edge. Assuming the signal edge is much faster than the rise time of the oscilloscope, the bandwidth of the scope is BW = 0.35/t_rise, with bandwidth in Hz and rise time in seconds. A scope with a rise time of 1 ns, for example, has a bandwidth of 350 MHz. The 0.35 factor assumes that the frequency-limiting elements in the scope’s front end produce a Gaussian filter shape, although the result is almost identical for a first-order RC filter; scopes with a sharper “brickwall” response may have factors of 0.45 or more. For more information about oscilloscope bandwidth, check out this article by Jenny List.

At the beginning of this article, I mentioned a connection between digital bandwidth and signal bandwidth: it turns out that the relationship between them is a cornerstone of information theory. Consider the question of what you can do with a channel of 1 Hz bandwidth. What’s to limit the amount of information that can be sent over this link? Claude Shannon was the first to solve this problem for an abstract communication system where symbols are sent over the channel. He came up with the Noisy-channel coding theorem, which showed that the maximum possible information rate depends on probability that a symbol gets corrupted in transmission. Channels which create more errors during transmission limit the rate that data can be transmitted, no matter how clever we get with error-correcting codes.

Later, the Shannon-Hartley theorem extended this result to less abstract signal channels where the error is due to additive white Gaussian noise (AWGN). The net result is the same: it’s noise in the channel that ultimately limits the rate of information that can be transmitted. In the case a channel corrupted with AWGN, we have the following result.

The channel capacity, C, in bits/second, depends on the bandwidth, B, in Hz, and the ratio of the signal power, S, to the noise power, N, in the channel. This is the theoretical limit of the channel, and we may have to work very hard coming up with clever error-correcting codes to approach this limit in practice, but we can never exceed it.

Armed with this equation, we can return to the original question: how much information can we send over a 1 Hz channel per second? If the channel is noise-free, the signal-to-noise ratio (SNR) is infinite, and we can send data at an unlimited rate — of course, this never happens. In the case of equal signal and AWGN noise powers, or a 0 dB SNR, however, the result shows that we can only send a maximum 1 bit per second. That’s a big drop from infinity! On the other hand, if we have a channel of 60 dB SNR, we can theoretically send a maximum of 19.9 bps in our 1 Hz bandwidth. Of course, if the noise level remains the same, we need to increase the signal power by 60 dB — a million times — to achieve this. And, the reality is that we can only approach these rate limits, and the codes which do so comprise a large body of research.

Even though the term is used in different ways in different contexts, the concepts of bandwidth are very simple. In a nutshell, signal bandwidth is the amount of frequency occupied by a signal, system bandwidth is the range of frequencies passed by the system, and digital bandwidth is the rate at which information flows over a channel. But, connecting these simple concepts are some very interesting fundamental principles of information theory. We’ve only been able to scratch the surface of this fascinating area in this article; sound off in the comments below if you’d like to see more articles about information theory.

37 thoughts on “Say It With Me: Bandwidth”