If you are a well-funded construction company making a bunker for some General or politicians, setting up a bomb shelter isn’t that hard. Find some land, buy it, excavate, pour concrete, and spend what you want on things like air conditioning and furniture. The equation is different, though, if you need to make lots of shelters to fit in peoples’ modest yards using simple materials. Homes in the UK rarely have cellars or basements, and even so, basements became death traps in the aggressive bombing during the war. 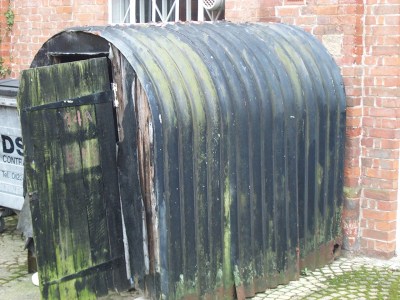 Just before the UK joined WWII, Lord Privy Seal Anderson was in charge of preparing for air attack. He turned to two men, William Patterson and Karl Kerrison, to come up with a practical solution. The so-called Anderson shelter was little more than some corrugated steel panels. Of the fourteen panels, some were curved and some were straight. The shelters were very effective because they’d be covered with dirt or sandbags.

You can see they weren’t spacious. An Anderson was about six feet long, a bit over six feet high and about four and a half feet wide. If you didn’t make much money, you got one for free. Most people had to pay a nominal sum for one, though.

What you did with the inside of your shelter was up to you. As you might expect, there was quite a bit of variation.

One common problem with the shelters, though, was that they were cold. No shelter will protect a family that won’t go in it, so the British government had some advice about staying warm. Ultimately, though, they developed the Morrison shelter. Although only a few of the three million or so Anderson shelters went into homes with sandbags, the Morrison shelter was strictly an indoor affair.

The Morrison shelter looked like a table with a crawl space underneath. In fact, it could be used as a table. John Baker, the designer, knew it would be impossible to shield against a direct hit under his design constraints, so he focused on mitigating common bomb-related deaths, such as roof collapses. The shelter took its name from the Minister of Home Security, Herbert Morrison and — honestly — reminds us of a rabbit cage. 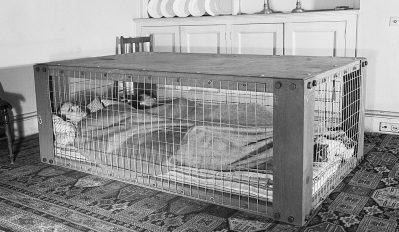 There were other shelter types, too, as well as people taking refuge in tunnels such as the Underground. Some people were saved, but there were many cases of people in shelters dying.

The Germans learned that basements — a common feature in German homes — were not good places to wait out a bombing. So they built Hochbunkers — high rise bunkers completely above ground. These structures had very thick walls up to 1.5 m thick.

These shelters might seem unlikely, but they were pretty successful. Attempts to destroy them on purpose after the war proved difficult, so many of them are still around being used for schools, offices, and storage space. The video below shows a Hochbunker in Munich that now serves as an apartment complex.

Duck and Cover in Your New Pool

If you think your Anderson shelter won’t survive a direct hit from a conventional bomb, imagine a direct hit from a nuclear one. However, during the Cold War, people were building fallout shelters. The idea is that you might survive a moderately nearby nuclear blast only to be killed by fallout up to a few weeks later. However, if you had a place to hang out for a few weeks, you might survive to rebuild civilization or destroy post-apocalyptic zombies or whatever.

It was so easy to build that even old Walt could do it — at least according to the concrete masonry industry in the film below. If you had a basement it was pretty easy to refit it and you could use the space as a bizarre guest room or a darkroom as the excited actors in that little drama continually point out.

If you want to read the books that Walt shows, there are quite a few copies of the Family Fallout Shelter guide floating around. We couldn’t find “Mr. Atom and his Sinister Blanket”, other than a few pictures from an auction and as a brief part of a historical video on the National Concrete Masonry Association (look around the 9:50 mark). We actually talked about Walt a few years ago.

In America as in Britain, in many parts of the country people don’t have basements. In that case, you need to dig out a fallout shelter, and that’s too much work for most people. The answer? Hire someone with an excavator to do it, so pool contractors got in on the act. Vice-versa, in other areas, contractors who set up to do excavations to capitalize on the fallout shelter craze turned to building pools once the shelter business started — no pun intended — drying up.

Of course, most people didn’t build their own shelters: they were going to go to the local Civil Defense shelter. According to experts, that wouldn’t have worked if there had been a real war. It is hard to remember just how afraid everyone was over a sudden and massive nuclear strike during the cold war. We had CONELRAD and bright yellow Geiger counters. Some of the things were maybe to make you feel better even if they weren’t totally effective.