At the most basic level, a Faraday cage is an enclosure made of a conductive material that blocks electromagnetic fields. In comparison to a Faraday shield, the cage variant is not a solid object, but rather a metallic mesh. Among other advantages, this allows observation of the subject inside of the cage. Put simply: if you simply want to protect a device from interference (or prevent it from causing interference) then it’s enough to enclose it in a metal box; but if you want something that you can experiment with, you’ll probably want a cage.

The trick is to make sure the holes in the cage material are smaller than the wavelength you wish to block. It’s the same principle that allows you to use standard chicken wire as a RF reflector as long as you’re working with relatively low frequencies. But as your target frequency increases the wavelength gets small enough that it can sneak through chicken wire, so you need to use something tighter. But how small is small enough?

The rule of thumb for a Faraday cage is that the openings should be no larger than 1/10th of the wavelength, which in our case is 12.5 mm (approximately 1/2 inch). As luck would have it, steel “hardware cloth” with mesh sizes of 1/2″ and 1/4″ is widely available. On paper either should work, but I did end up going with the 1/4″ to be safe. 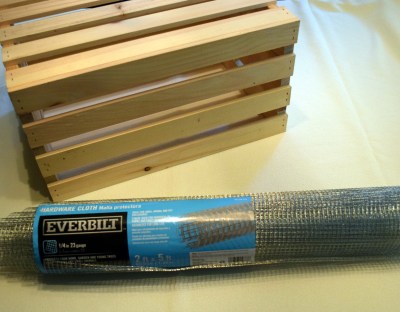 With the mesh in hand, the next step is to build some kind of frame for it. As it so happens, Home Depot has wooden crates in their storage section which are strong and relatively cheap. You could also construct a frame from pieces of wood or PVC pipe, which may end up being cheaper if you don’t mind taking the time to build it.

I popped a couple of the slats out of one side of the crate so it would be easier to see inside, but beyond that, the construction simply consists of wrapping the crate with the hardware cloth. I did one long piece that started at the front and wrapped all the way to the back, and then two smaller pieces to “cap” the sides. In the end, it’s not entirely unlike gift wrapping; if the gift wrap was metal and had a nasty tendency to cut you, anyway.

One thing to pay close attention to is where pieces of the mesh overlap. You want to maintain a good electrical connection and avoid any gaps, so you should overlap the pieces by at least a couple of inches to be safe. I attached the hardware cloth to the crate with a power stapler, so I also made sure to drive a few extra staples through the areas where the mesh overlapped to ensure they were held together tightly.

As a simple test, I set my phone up on the bench running the signal strength function of the “WiFi Analyzer” application for Android, with an Access Point that’s one floor above selected as the target. In the two pictures below, the only thing that has changed from one shot to the other is placing the DIY Faraday cage over the phone.

As you can see, the phone had a signal strength of approximately -55dBm originally, and it dropped down to nearly -80dBm when inside the cage. Weaker Wi-Fi networks were rendered undetectable when the phone was inside the cage, and there was a clearly detrimental effect on the phone’s LTE reception.

I should say, before the commenters below get a chance to do it for me, that this is admittedly not a very good Faraday cage. For one, it’s not fully enclosed. Since there’s no bottom signals are still able to enter from below, greatly reducing its effectiveness. The steel mesh is also not an ideal conductor, and copper would likely work better. But finding a local source of tightly wound copper mesh proved tricky.

There’s also some debate about whether a Faraday cage must be grounded or not. For what it’s worth, during my testing there was no observable change in performance when the cage was grounded. Though it’s possible a more conventional Faraday cage may perform differently.

Having said that, I still feel this design blocks RF enough to be useful. It will never completely isolate the device inside from electromagnetic interference (or vice versa), but it attenuates signals significantly enough to be clearly observable. That was the extent of my ambition to begin with, so I’m happy with the results.

Imagine you are developing or testing a remotely controlled device, and want to see how it behaves when signal strength is poor. Tossing the cage over it would allow you to induce a drop in signal strength instantaneously. Or perhaps you’re observing the RF emissions of a device, but want to cut-down on superfluous background noise. Putting the piece of gear under test and your SDR hardware inside the cage would be an easy way to study it in a less “noisy” environment.

Those are just two possibilities. This demonstration shows there’s really no good reason not to have a simple RF blocking device at your disposal. It’s cheap, it works, and it can be your next weekend project. What you do with it is up to you, just make sure you drop us a line when you figure it out. What would/do you use a Faraday cage for?