With so many creative hardware badges it’s pretty impossible to narrow it down to a favorite, but the DCFurs badge is pretty close to the best this year. One of the things I like about it is the art that gives it the iconic look. As far as I know this is original and not borrowed from pop culture. The combination of gold-plated copper, matte black solder mask, and white silk screen is used in a lot of badges but it really pops with this design. Finally, the simple yet interesting design of the display made for some really interesting patterns, and it’s still dense enough to scroll text really well.

The group made 600 of these badges, building on an STM32F411 because it runs MicroPython. This is used for the visualizations shown on the screen, while the puzzles and hardware abstraction layers are written in C.

The amulet clock isn’t quite a badge, but it’s cool enough (and close enough) to mention here. It uses a VFD display for the time, running at -30V. The power supply design and having it that close to your neck, are both a bit fascinating but too complicated to go into detail here. The creator of this clock is hoping to get the design into an article for POC||GTFO so hopefully we’ll get to read about before long. 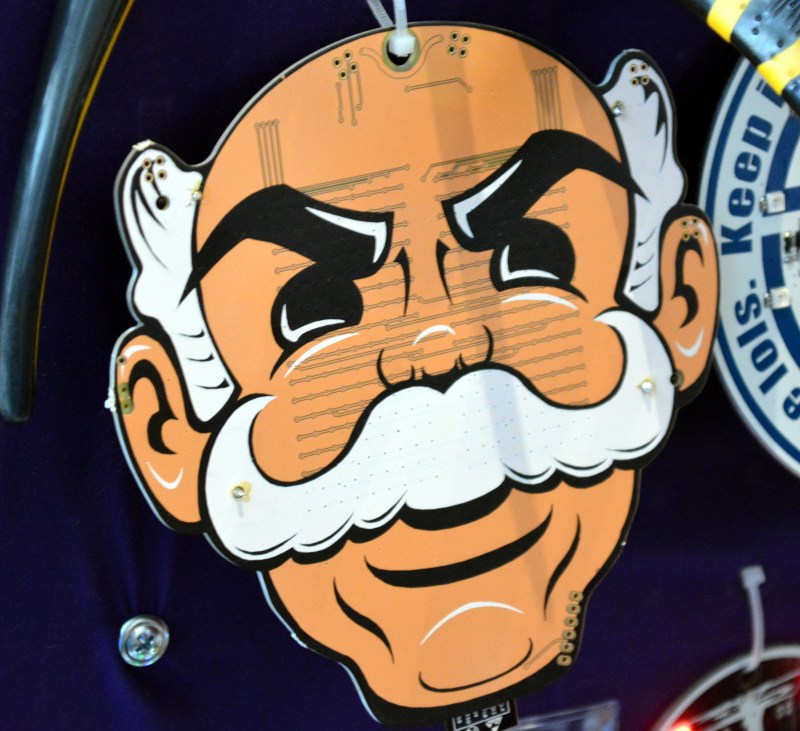 The MrRobotBadge was once again a hot commodity at DEF CON 26. The art side of the badge is based on the mascot of anti-everything from the television show of the same name.

This year’s badge has greatly increased the size of the display. The ESP8266 driving the badge couldn’t possibly keep up with the display, but the use of the IS31FL3741 display driver makes it possible. It takes I2C commands and in turn handles the scanning of a matrix as large as 39×9. In this case the LED matrix on the badge is 18×18, with a d-pad to the left and two buttons to the right (classic NES style).

You can reprogram the badge using a serial to USB cable. One of the cooler hacks I’ve seen on the badge is this example of Conway’s Game of Life.

The Dragonfly badge returned to DEF CON this year. You can hear the story of last year’s badge from Kerry’s talk on the topic. Having learned his lesson regarding hand assembly, this year he panelized the badges and had them professionally assembled.

In keeping with the original, the Dragonfly badges communicate with each other using IR, synchronizing when they’re in groups. (The concept comes from Neal Stephenson’s book The Diamond Age.) Although they have a lot more LEDs this year, the two versions are still compatible when it comes to those sync messages.

Kerry included add-on headers and the badge he was wearing around was sporting a taco, a squid face, a Santa hat and a small fries. Perhaps the award for best distribution of multiple add-ons should got to this design!

I think this is the only non-electronic badge I looked into covering this year. Sorry for failing to get it in focus, the bejeweled badge is giving the auto-focus a tough time. That’s because it’s super reflective. El Kentaro told me the badge itself is 3D printed, smoothed, and then covered in multiple coats of gold spray paint. The inset is not just large jewels, but hundreds of tiny glass beats to fill in the gaps between the larger stones.

We already ran an in-depth teardown of the Queercon badge so I won’t go down that road again here. It was the most polished of all the designs I saw at DC26. If you made it to the Hardware Hacking Village, you may have seen MaraJade’s badge repair Kiosk set up with everything you’d need to repair untold numbers of badges. When I stopped by, she showed me an interesting tidbit I hadn’t yet seen: the cake recipe from Portal is part of the “LAB” faceplate design, in micro-lettering on the copper layer. neat!

There are all kinds of secrets about the Queercon 15 badge available now that the con has passed. It’s definitely worth a look.

Before all the slices are installed

Just thinking about the power supply requirements of this giant RGB LED ball makes my head hurt. The product of hackers from LA’s Null Space Labs, I think this is the 320 LED version (16 slices with 20 RGB LEDS per slice) but they have a 384 LED version in the works too. Check out their Hackaday.io project for more info — it seems they’re in the middle of Crowdfunding a production run of these.

This badge again makes use of the matte-black/gold/white very well but adds to it one additional color of red. The design uses it all in perfect proportion, and adds in white LEDs to make up the constellations. This is the work of Thomas Flummer who designed the BornHack badges for last year and this year (wrapping up later this week). This badge looks spectacular so it’s no surprise this isn’t his first rodeo.

Most interesting to me is the inspiration Thomas pulled from other badgemakers. In his writeup he mentions the inspiration he drew from Kerry Scharfglass’ Dragonfly badges which “didn’t focus on skulls” — focusing instead on something that is beautiful and not a play on black T-shirts and the accoutrement that go with them. He also took Joe Grand’s Optical Spy idea and ran with it… there’s data hidden in those LEDs!

Apparently Google has an event at Blackhat/DEF CON each year that I had never heard of it until I ran into TwitchyLiquid64. The badge is designed to look like a casino chip, with LEDs lining the circumference. 520 of them were made and each has an IR receiver and LED, letting the badges change one another’s patterns. I thought it was neat that TwitchyLiquid was using a remote control like you’d see with an LED strip to easily control the badges. Check out more details on the badge’s repository.

No time to spin boards for your custom badge? #Badgelife finds a way. I loved seeing this custom name tag badge from Gigs. He said he decided about a week before the con to build something and this is what came out. It’s a hunk of protoboard, four batteries, two supercaps for smoothing the load, and 67 LEDs in parallel. Oh yeah, and no resistors. It only has to last one weekend after all! 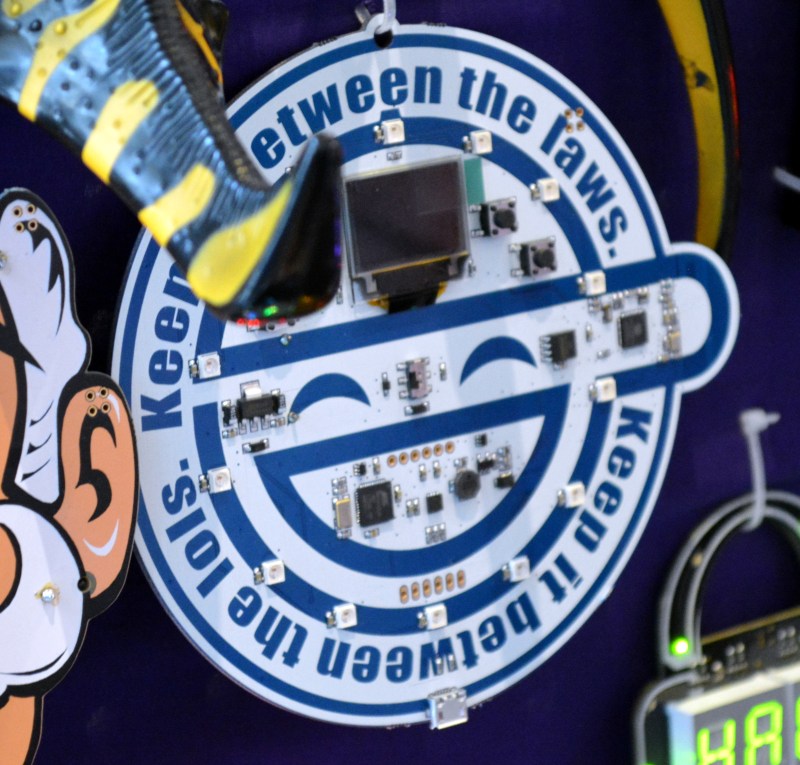 The Hacker Warehouse badge is a beautifully clean design. I find it interesting how some boards look obviously like PCBs and others, like this one, end up looking more like a finished good. The text and graphics came out so nicely you almost expect the electronics to be hidden behind this face plate.

This badge is packing everything plus the kitchen sink in terms of USB and WiFi penetration testing. One of the hard things about trying to see all the badges is that you fall into the trap of visiting with the people and forgetting to talk about the badge. So is the case with this one, but we’re in luck that Brian Benchoff already did an in-depth review that shares all of the details.

I’m always anxious to get my hands on the DEF CON Darknet badge each year. It exists is to take part in a set of crypto puzzles designed both to welcome in beginners (me, I suck an crypto puzzles but want to get better) and veterans alike. This is the first year that I can remember an abundance of badges being available.

This year’s badge is called Cdmc0de (command code) and there were over 1200 made. They come in kit form, and that took about 3 nights for a volunteer crew to get everything into bags. The PCB itself has all of the surface-mount components already installed, including the STM32 and ESP32 which are both included in the design. This is the first year the Darknet badges have used a custom programming jig and it is said to have made the flashing process a dream.

Once assembled there are two screens, an OLED that is narrow and long, and a larger LCD screen. Badges are able to interact with each other, based on selections from a user menu based on a D-pad and two button (Classic NES again) user interface. Thar’ be puzzles inside but I have yet to take them on. 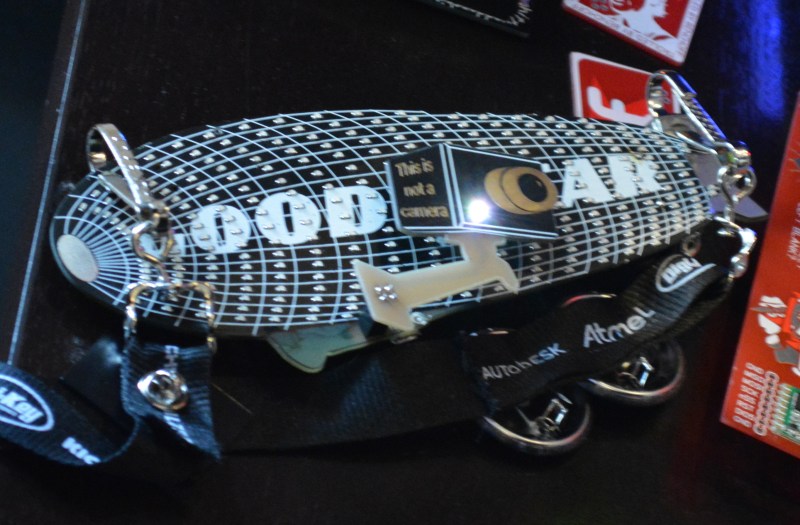 This is an awesome badge that didn’t quite get across the finish line. As you can see, it’s designed to look like the Goodyear Blimp, adorned with several hundred LEDs. At about 7 inches across, it would have made a formidable addition to your lanyard-mounted bling. Unfortunately, time ran out before the project got to the firmware phase, but the hardware is all there.

That didn’t stop Chris Gammell from having some hardware fun. With time running out he also rolled an add-on. Based on the super popular “This is Not a Camera” stickers from DC25, he built an add-on shaped like a surveillance camera and spent DC26 handing out boards. 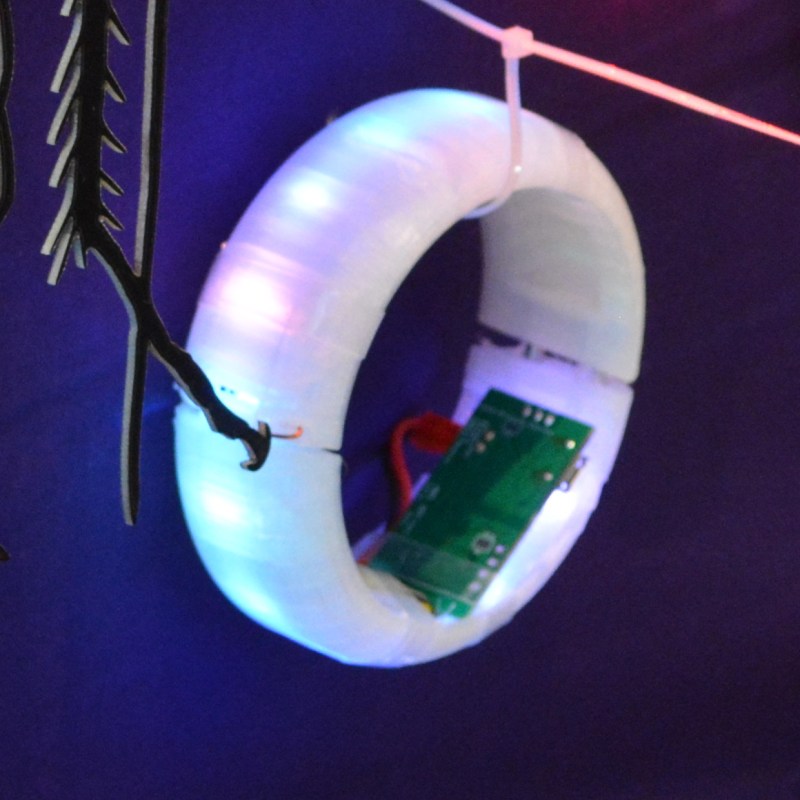 The DC503 badge is one that I look for every year. Ostensibly it’s built for Portland-area hackers but I think there’s such a huge following of the DC503 group that they don’t really care where you’re from if you want to be part of this awesome crowd that gathers in Portland once a month, and every year for a party at DC.

This year the key feature of the badge is a 3D printed diffuser that hinges around your wrist. Inside is an RGB LED strip that looks great spinning patterns through the while plastic. The single driver board sandwiches between you and the diffuser. They were everywhere at the bumpin’ 503 party. Other than that I have no more info on this one. Anyone in the know, please leave details in the comments below.

Once More Before the Dawn

The DEF CON badge anthology for this year isn’t closed yet. I think I can get through the rest of the badges I saw at the con in one more giant installment. Keep your eye on Hackaday!