You have to use gcc, because this trick uses two nonstandard language features. First, gcc allows nested functions. In addition, you can use statement expressions. That is an expression that can do everything a function can.

These two things, combined with some abuse of the preprocessor, will let you stuff your function code right where you need it and relieve you of having to name each and every little function you write just to pass to another subroutine.

If you use another compiler, it might not — in fact, probably doesn’t — have these features. In the end, though, you could always just use a proper function with a pointer. This is a bit nicer. 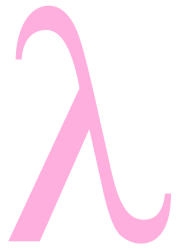 I created a simple example of a case where you might want to use a lambda in C. You can find it on GitHub. There’s an array of floating point numbers, thelist, and two functions that process the list. One averages the list after multiplying each value by 2. The other does the same task but divides each entry by 3 first.

A contrived example, to be sure, but easy enough to understand. If you study the code, the two averaging functions, average2x and averagethird, are almost the same. The only difference is the one point where the math is different.

Now look at this version. Here, the average_apply function does all the averaging work, but it requires a function pointer, fn, to do the math operation you want. There are two functions to work out the math:

Then making the call is easy:

Those little snippets of code now need names and we won’t really use them anywhere else. That’s the perfect spot for a lambda. You can put this in a header file (although I just left it at the top of the file for this example):

This takes advantage of the gcc features I mentioned and the fact that gcc will let you use dollar signs in identifiers. That means that you might need to pass -std=gnu99 on the gcc command line to make this work properly. This should do it:

Now the calls just put the functions right in line:

By the way, I realize you could just pass a factor of 2 or 0.3333 to one function, but that’s not the point. The functions could be as complex as you like. Like most programming problems, there are many ways to solve this.

There are caveats. You can’t depend on the lambda having a scope beyond the enclosing function so an asynchronous callback would not work. Accessing local variables in the enclosing scope is iffy. Consider this code:

This compiles and ought to work. It does work for this online compiler. However, using the Linux system for Windows 10, the same code would seg fault. In fact, if you didn’t set the gcc -O2 option, the other examples would seg fault, too. On my Linux boxes, it works fine. I can’t tell if this is a bug in Windows or if Linux is just covering up something wrong. However, it seems like if it compiles it ought to work and — mostly — it does.

Granted, you don’t have to have lambdas with C. Even if you want them, they aren’t very portable. But it is still interesting to see how some gcc-specific compiler features work and it is also an interesting intellectual exercise to try to match it.

The technique is not new. If you search, you can find quite a few postings in various places with the same idea, although each one has small variations. Of course, in C++ of recent vintage you can use lambdas with no problem. By the way, lambdas are all the rage for cloud computing, too, and it is a similar idea. A little function that just runs without having to wait on a server for a request.