For many of us, it’s difficult to imagine a world without Maker Faire. The flagship events in California and New York have served as a celebration of the creative spirit for a decade, giving hackers and makers a rare chance to show off their creations to a live audience numbering into the hundreds of thousands. It’s hard to overstate the energy and excitement of these events; for anyone who had the opportunity to attend one in person, it’s an experience not soon forgotten.

Unfortunately, a future without Maker Faire seemed a very real possibility just a few months ago. In May we first heard the events were struggling financially, and by June, we were saddened to learn that organizer Maker Media would officially be halting operations. It wasn’t immediately clear what would happen to the flagship Maker Faires, and when Maker Media reluctantly admitted that production of the New York Faire was officially “paused”, it seemed we finally had our answer.

But as the recent Philadelphia Maker Faire proved, the maker movement won’t give up without a fight. While technically an independent “Mini” Faire, it exemplifies everything that made the flagship events so special and attracted an impressive number of visitors. With the New York event left in limbo, the Philadelphia Faire is now arguably the largest event of its type on the East Coast, and has the potential for explosive growth over the next few years. There’s now a viable option for makers of the Northeast who might have thought their days of exhibiting at a proper Maker Faire were over.

We’ll be bringing you detailed coverage of some of the incredible projects that were on display at the Philadelphia Maker Faire over the coming days, but in the meantime, let’s take a quick look at some of the highlights from this very promising event.

Held on the Pennovation Works campus, the event featured both indoor and outdoor exhibition areas. The projects on display inside tended to be somewhat more delicate, or otherwise required a bit more infrastructure than could be mustered under the rows of tents erected in the Pennovation parking lot. This included a rather lively musical performance courtesy of eight sequencer-controlled Nintendo Game Boys, and an area where attendees could check out the the latest in virtual reality gaming.

But while the indoor exhibition area was a nice change of pace, especially on a blustery October day, the real action was outside. Many of the projects on display, from the fire-breathing steel pterodactyl to a street-legal flywheel powered car, required far too much room to fit inside the building. Plus, it’s where you’d find the food trucks and even a beer garden operated by the local Yards Brewing Company.

The Pennovation campus also features an outdoor “Motion Capture Arena”, an area about the size of a tennis court that’s fully enclosed with netting so robotic vehicles (flying or otherwise) can be safely contained while still having plenty of room to move around in. This proved to be a very popular area during the Faire, as exhibitors could operate their more energetic creations without risk to those in attendance.

A flock of R2s

A quadruped bot takes a stroll through the Motion Capture Arena

Several of the exhibitors in Philadelphia were veterans of the World Maker Faire in New York, and more than a few have already graced these pages in some way or another. It’s always exciting to see a project that we’ve covered continue to grow and evolve, especially when they make the transition from a one-off DIY build to a commercial product.

A perfect example is Evan Weinstein’s Cocoa Press 3D printer. When we saw this chocolate printer last year in New York, its construction reminded us more of the early Makerbot days than the slick mass produced desktop 3D printers that have taken over the market. But the version that was on display in Philadelphia was a very different beast all together. Beyond the distinctive high-flow syringe extruder, the latest version of this confectionary constructor bore almost no resemblance to its predecessor.

We also ran into Benjamin Lehrer and Jonathan Roach, the young duo behind SPOT Technology. They were showing off their larger-than-life version of the classic Operation board game, which unsurprisingly was a huge hit with show attendees both young and old. During a rare lull we were given a close-up tour of the game’s inner-workings, and picked up on a number of clever design decisions such as the use of standard coax cable to carry low-speed serial between the coin-op inspired control panel and the nine foot tall game board. 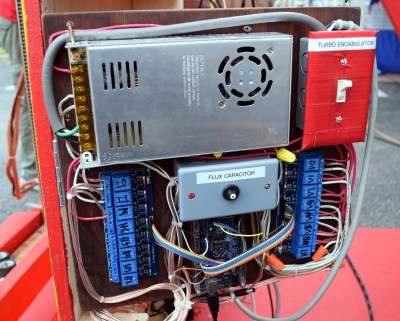 The team previously wowed the 2018 New York Maker Faire with a towering version of Connect Four, and their latest supersized game was intended to be something of a sequel. But just as it was nearing completion, they got the gut-wrenching news the event had been canceled. For a while, it seemed there was a real chance that all the work they had put into the mammoth game would go to waste.

While they acknowledged the scale of the event couldn’t quite compare to the larger New York Faire, Ben and Jonathan said they were grateful that the Philadelphia Maker Faire gave them a venue to show off their latest creation on such short notice. Judging by the line of people waiting to take their turn at the controls, so was everyone else.

This was only the second year of the Philadelphia Maker Faire, and the first where it wasn’t competing with the far larger World Maker Faire in New York. In 2018 the event attracted around 1,700 visitors, and organizers were expecting to at least double that for 2019. From an attendee’s perspective, it appeared they easily hit that goal. The Faire was a bustle of activity, and judging by the lines that formed at some of the larger exhibitions (as well as the food trucks), it looks like they’re primed to expand yet again for next year.

Of course, even if it quadrupled in size, this “Mini” Faire still wouldn’t be anywhere near the scale of the now defunct flagship events. But everyone we spoke to said they were happy with the event remaining more intimate and truer to the roots of the maker movement. It’s no secret that the bigger Faires were a logistical nightmare, and despite being billed as the “Greatest Show & Tell on Earth”, smaller DIY exhibitors often found themselves upstaged by better funded corporate presentations. At the Philadelphia Faire, there was a sense that the playing field had been leveled, and the Individual makers were truly the stars of the show.