Renewable energy has long been touted as a major requirement in the fight to stave off the world’s growing climate emergency. Governments have been slow to act, but prices continue to come down and the case for renewables grows stronger by the day.

However, renewables have always struggled around the issue of availability. Solar power only works when the sun is shining, and wind generators only when the wind is blowing. The obvious solution is to create some kind of large, grid-connected battery to store excess energy in off-peak periods, and use it to prop up the grid when renewable outputs are low. These days, that’s actually a viable idea, as South Australia proved in 2017.

On the 28th of September, 2016, the state of South Australia faced an unprecedented storm. Wind gusts exceeded 120 km/h, and pouring rains threatened to flood low-lying areas. Amid the chaos, major transmission lines and interconnectors were damaged, and the entire grid went down. 1.7 million people were suddenly without power.

Thankfully, in the hours following, civilization remained standing. Emergency crews were able to bring the grid back to life relatively quickly, with most parts of the state up and running within 24 hours. Despite this, the incident was quickly used as a political football, with the reigning pro-coal Federal Government placing the blame squarely on the state’s heavy use of renewable energy. This was provably false, but spawned a greater discussion about improving grid resilience and the use of grid storage for when solar and wind generation is impractical.

The polava drew the attention of Elon Musk, who threw down the gauntlet. A battery-based storage solution installed within 100 days of contract signature — or it’s free. Further billionaires weighed in, and the State Government set the project in motion. Construction actually began prior to the contract being signed on September 29th, 2017, with the battery finished 55 days later, technically well ahead of schedule. Some decried it as a PR stunt, but the Hornsdale Power Reserve now sports the world’s largest lithium-ion battery, connected right up to the grid.

Taking Advantage of a Fast and Ready Resource

The battery as installed features 129 MWh of storage, using Samsung 21700 lithium-ion cells, similar to those in the Tesla Model 3. Capable of a maximum discharge rate of 100MW, at full tilt the battery can operate for a little over an hour. However, in day to day operation, the battery is not used in such a way. Instead, the battery is contracted to operate in several different ways to suit the needs of the grid.

Three hours of output at 30 MW (or 90 MWh of capacity) is set aside for load shifting. This is where excess renewable energy is stored in the battery when not needed by the grid. This power is then later sold on the market during peak times when electricity prices are higher. 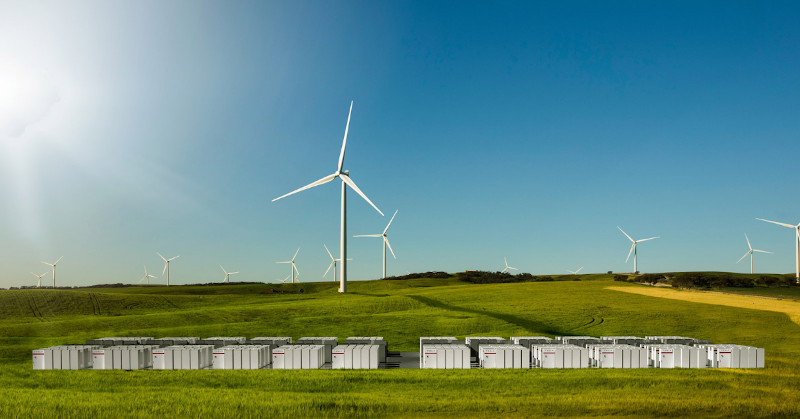 Next to this, 70MW of output is reserved for maintenance of grid stability. Power grids require careful management of their many connected generators, in order to make sure that the voltage and frequency of the grid remain in acceptable bounds. This is achieved through maintaining a balance between the supply and demand of electricity across the entire grid. Sudden changes in either supply or demand require quick reactions from attached generators in order to avoid major excursions that can risk taking the grid offline, or lead to rolling blackouts. Commonly, this happens when a major generator such as a coal plant has a fault, or when a soap opera ends in England and thousands of households all switch on the kettle at the same time. This is referred to as Frequency Control and Ancilliary Services (FCAS) in the local market, and is typically handled by gas-powered generators, which can respond on timescales of seconds to minutes.

The Hornsdale battery, however, is capable of much faster response times. On December 14th, 2017, the Loy Yang A coal generator tripped, causing the sudden loss of 560 MW of generation from the grid. Upon the main frequency dropping to 49.8 Hz, in mere milliseconds, the Hornsdale installation delivered 7.3 MW to the grid to prop up the frequency over a period of several minutes, while other infrastructure was brought online. This fast-discharge capability has allowed the battery to beat other generators to the punch. This has brought the battery’s owners, Nueon, significant profits from the provision of FCAS services to the grid, taking 55% of the market from existing operators. There have been complaints that the existing billing system is not actually fast enough to properly compensate the battery’s owners for its output, as the system was originally designed around conventional generation which is slower to respond.

Looking To The Future

The success of the project has proven that battery storage at a grid scale is now practical and, more importantly, profitable. The Hornsdale Power Reserve was built at a cost of just $50 million, and despite their initial mockery of the state project, the Federal Liberal government have confirmed funding for the expansion of the project. The battery will be upgraded to deliver up to 150 MW, with capacity expanding to 193.5 MWh. This will allow the battery more capacity to respond in the case of adverse events, as well as improve the profitability of load shifting operations. There will also be trials of “digital inertia” technology, where the battery’s inverters will be designed to replicate the mechanical inertia of large synchronous generators, further stabilizing the grid.

Other lithium-ion battery projects are cropping up worldwide, too. Plans for a New York plant are underway, aiming for a 316 MW output and a massive 2,528 MWh of capacity, allowing the battery to run for extended periods. California is also looking to host a pair of installations, with a 400 MW project in Long Beach and a 300 MW project in Moss Landing.

With the cost of lithium-ion batteries continuing to come down thanks to economies of scale and the electric car revolution, it’s likely that yet more projects will come to fruition. Where there is profit to be made in the load shifting of renewable energy, along with a need for highly responsive grid stabilization services, grid storage batteries make a strong business case.