If you’ve been into electronics for any length of time, you’ve almost certainly run across the practical bible in the field, The Art of Electronics, commonly abbreviated AoE. Any fan of the book will certainly want to consider obtaining the latest release, The Art of Electronics: The x-Chapters, which follows the previous third edition of AoE from 2015. This new book features expanded coverage of topics from the previous editions, plus discussions of some interesting but rarely traveled areas of electrical engineering.

For those unfamiliar with it, AoE, first published in 1980, is an unusually useful hybrid of textbook and engineer’s reference, blending just enough theory with liberal doses of practical experience. With its lively tone and informal style, the book has enabled people from many backgrounds to design and implement electronic circuits.

After the initial book, the second edition (AoE2) was published in 1989, and the third (AoE3) in 2015, each one renewing and expanding coverage to keep up with the rapid pace of the field. I started with the second edition and it was very well worn when I purchased a copy of the third, an upgrade I would recommend to anyone still on the fence. While the second and third books looked a lot like the first, this new one is a bit different. It’s at the same time an expanded discussion of many of the topics covered in AoE3 and a self-contained reference manual on a variety of topics in electrical engineering.

I pre-ordered this book the same day I learned it was to be published, and it finally arrived this week. So, having had the book in hand — almost continuously — for a few days, I think I’ve got a decent idea of what it’s all about. Stick around for my take on the latest in this very interesting series of books.

In the first paragraph of the book’s preface, the authors give the basic picture: the “x” is for eXtra, meaning that the material in this book was originally slated to be part of the AoE3, but simply didn’t fit — that book is 1250 pages as it stands. The new book comprises some 500 pages organized into five chapters: 1x, 2x, 3x, 4x, and 9x. This unusual numbering scheme keeps the contents in correspondence with the chapters of the third edition of AoE, stressing the fact that a lot of this material would be right at home there. In fact, each chapter of the new book begins with a repetition of the end-of-chapter review from the corresponding part of AoE3.

While I’ll discuss some of the highlights of each chapter — but not an exhaustive list — keep in mind that this book reads a little differently than AoE3: it’s more engineering reference handbook and less textbook. The preface is explicit about this; the linear structure of previous AoE books has been replaced with very modular sections on specific topics. This is great if you’re an even somewhat experienced designer looking for some from-the-trenches experience on a specific topic, but maybe less useful for the beginner — more about that later.

Starting with the lowly wire, this chapter examines the behavior of components in the real world. Conductors, cables, and connectors are examined to determine the non-ideal effects they can exhibit. Likewise, there are discussions of real-world resistors of various types, including digital potentiometers. Capacitors and inductors get extensive treatment since there are myriad imperfections that plague them. Section 1x.6 is particularly interesting, covering mechanical switches and relays, components that we sometimes forget have non-ideal characteristics. This is certainly worth a read if you use these components for anything non-trivial. Finally, the chapter concludes with a discussion of different types of diodes, including some esoteric types, and their practical failings.

But there’s more than the merely practical in this book. As an example, the book devotes a section of a few pages to tunnel diodes, an esoteric subject with largely nostalgic interest for the authors. Not content to simply give the theory, they delve into the practical aspects of tracing tunnel diode curves. Having documented my attempts at this in these very pages, I can really appreciate the care and detail that went into the treatment of this subject in the x-Chapters. This is Hackaday-type stuff; if it were’t already in a book, their work would fit right in as a daily article here. As we’ll see, there’s more of the same in subsequent chapters.

This isn’t the only fun the authors are having. The title of this very article comes from their own footnote alluding to The X Files.

As was noted, you won’t find a textbook introduction to bipolar junction transistors here; instead, you’ll find a collection of smaller notes about specific subtopics. For instance, the authors tabulate and discuss the leakage currents of a collection of BJTs and FETs for comparison and include a section on BJT bandwidth and transition frequency. They work through a detailed example simulating several BJT amplifiers in SPICE to measure distortion. They discuss improved current mirrors and some very interesting bipolarity ones.

There are further excursions into lands less traveled, like the discussion of a two-terminal negative resistance made from BJTs, another obscure subject close to my heart.

In the third x-Chapter, you’ll find some good info on selecting FETs for your application, discussions of FET transconductance, the bandwidth of FET circuits (and comparisons to BJTs), a very good discussion of the evolution and current state of power MOSFETs, and a section on integrated MOSFET gate drivers. There are also application circuits for measuring MOSFET gate charge and FET transconductance, with tabulated results for a variety of types.

x-Chaper four begins appropriately with a brief discussion of an antique vacuum-tube op-amp, with the rest of the chapter devoted mainly to discussing the finer points of design with modern devices. There’s an expanded discussion of feedback stability, a detailed treatment of transresistance amplifiers, such as for photodiodes, coverage of unity-gain buffers and their uses, and two chapters on high-speed op-amps: one on the voltage-feedback variety, and a second for current-feedback types. They also cover some unusual capacitive-feedback op-amp circuits, logarithmic amplifiers, and driving capacitive loads, among other short topics.

In the exotica category, there is a section on silicon photomultipliers, and an example circuit which produces graphs of the chaotic attractor of the Lorenz system on an oscilloscope.

As for out-of-the-way topics, there’s one page on low-voltage boost converters for energy harvesting — they present a simple circuit that starts up at a supply voltage of 20 mV and runs down to 10 mV. They have also included a section on bus converters: bi-directional DC converters, which can convert from one voltage to another, say 12V down to 5V, but also work in reverse, transparently. This is interesting stuff.

Obviously, in this short review, I can’t cover everything in the book. Have I left out something that will end up being your favorite part? Quite possibly. Hopefully, though, you’ve got enough of the flavor of the book to know if it warrants a further look. 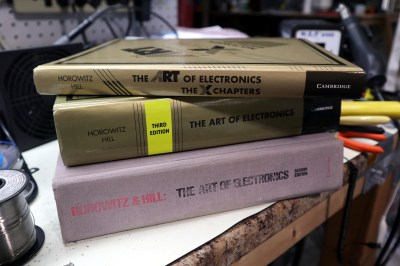 Like in the original AoE books, in addition to the discussion of design issues, the new book contains selection tables for various electronic parts. Need a high-speed op-amp? How about a MOSFET gate driver? Check the corresponding table. It would be a mistake to confuse these tables with the parametric search available on manufacturer’s or distributor’s web sites. While the search tools are certainly useful, they’re a poor substitute for tables carefully curated by designers who’ve actually used the parts.

One of the more interesting features of the book is the parts index at the back. If you want to know all the authors have to say about the 2N3904 transistor, for instance, the index will point you to the twenty-two places in the book that it’s mentioned. This is a tremendous idea for a book like this, which contains all sorts of information you may not find in datasheets.

Should You Buy It?

First off, I should say that I don’t consider any of the AoE books to be suitable as first books for absolute beginners. Sure, if you’ve studied another field of engineering, you could probably pick up a copy and start running, but for the true beginner without any engineering experience, you would probably want to start elsewhere and refer to AoE for more advanced discussions — sound off in the comments with beginner book recommendations if you have them.

However, if you’ve used any of the three editions of The Art of Electronics with success, I’d recommend the x-Chapters without hesitation. Having had a little bit of time with it now, I’d be tempted to say that the third edition of AoE is incomplete without this additional material. This is not to say that I felt AoE3 was lacking before this new book, but it’s certainly more complete with this included. Does it make sense to buy this book without AoE3? Sure it’s a great book for what it covers, but the x-Chapters itself is absolutely incomplete without AoE3 by its side. Personally, I wouldn’t be without either on my shelf now.

40 thoughts on “The Truth Is In There: The Art Of Electronics, The X-Chapters”