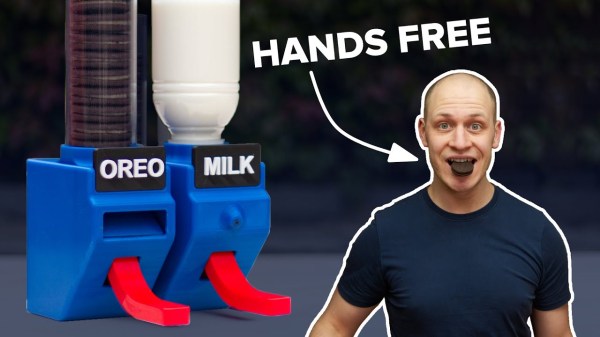 A while back, [Emiel] aka [The Practical Engineer] created a hands-free Oreo dispenser for his shop. This was a necessary addition to his fleet of handy tools, and allowed him to multitask much more effectively by using a sander, for example, at the same time that he needed to eat a cookie. Of course, this time-saving device was missing one crucial element: milk. [Emiel] is back in this video to show off his milk-dispensing upgrade to his original Oreo dispenser.

A few ideas were considered before [Emiel] decided to build a separate unit for the milk dispenser, so as not to create a gigantic mess any time an Oreo was delivered, and also to maintain some decorum in the shop. He rebuilt the Oreo dispenser with a 3D printer and then also 3D printed the milk dispenser. The chin-activated switch inside the device turns on a small pump which squirts milk into the user’s mouth, presumably after an Oreo has been delivered.

There are a few problems with the build, but most are easily solved by replacing non-food-grade parts with plastic that is more safe for being around consumables. The only other thing we can see here is that it might be a little hard to keep things clean, both inside and out, but most Oreo-related builds like this one have at least some problem with cleanliness that isn’t impossible to keep up with.