It’s a versatile robot arm, for a fraction of the cost of what came before it, with immense potential for customization. And did I mention that it’s open source?

What is a Micro-Factory?

Simply put, a micro-factory is a recreation of the tools and skills the Haddington Dynamics team have at their current headquarters in Las Vegas. With four production stations in their office, each capable of building two robots at a time, the team can build 30 robots a month.

The micro-factory model licenses this technology. Those who will staff the new locations come to headquarters for training in the process of building a robot arm. They take this knowledge back and use the same tools and materials to begin producing robots at their own location.

The first micro-factory produced robot arm was complete on February 24, 2020 in Toowoomba, Australia, about 120 kilometers (75 miles) inland from Brisbane. There are currently two people working at the new DCISIV Technologies location and their goal in the near term is to reach a capacity of 32 robots per month with a workforce of four people.

Why Not Traditional Manufacturing?

So why not just set up shop in a traditional factory and start banging out robot arms as fast as you can stack them on pallets?

First off, total sales volume isn’t quite there yet. But with about 300 robots now in the wild across over 20 different countries it’s not hard to see that they do need to step up production abilities. The immediate factors driving their assembly methods are the complexity of the parts and their desire for the ability to customize and improve the design without the headache of factory retooling.

The current design includes parts that would be difficult or impossible to injection mold, as well as other made of materials like carbon fiber. So they use 3D printing for many of their parts, ranging in material from PETG and nylon, to a combination of carbon fiber reinforced nylon (called Onyx Filament) to continuous carbon fiber filament. For multiple-material parts, molds are used to align everything during the glue-up process. The molds and the 3D printers themselves are all part of the equipment specified for the micro-factory model. You can check out the intense manufacturing process in the assembly image gallery or from this eleven-part video series. 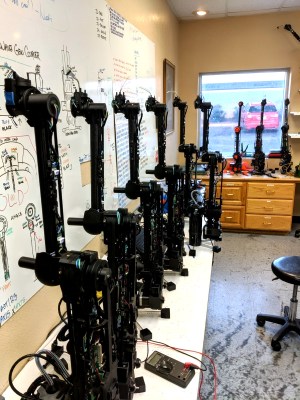 There are some very interesting things on the horizon. At launch, each of these micro-factories is set up to build robot arms. But there’s no reason they couldn’t be used to make something else. Haddington Dynamics wants to see robots building robots. This first iteration is 3D printers, which we suppose are a type of robot, building robot arms. The next iteration could be robot arms doing the building.

It’s also worth noting that this model untangles complex supply chains. The majority of parts are manufactured on-site. The remainder are common goods like threaded rod and fasteners. Even the bearings come from common mass-produced items like motorcycle hub bearings and inline-skate wheel bearings. If there was ever a shortage of these components it’s entirely possible to quickly redesign the manufactured parts to suit a replacement part.

What Does Dexter Have in Its Future?

As mentioned before, one of key features of Dexter is how easily it is to train the robot arm. The video below shows two arms being trained to pull a pint of beer from a tap. One uses a special end effector to pick up the cup while the other operates the tap.

It’s a great way to show off what the robot can do, but real-world applications are not far off from this type of skill set. The team tells me they’re working on a routine that uses Dexter for gong meditation. For those that are not able to connect in person with a human instructor, the robot arm can precisely record and playback the motions used.

They’re also working with NASA to establish a commercial drone certification protocol. Delivery companies are chomping at the bit to get automated drone delivery in place, with the FAA trying to keep up in establishing safety regulations. Large drones need to have their airframes inspected every 100 hours of flight and any drone that flies beyond line of sight — the purpose of a delivery drone — needs to have the integrity of its electronics recertified for every flight. This is labor intensive for what is meant to be an autonomous delivery system, and Dexter is being tasked at doing the automated drone inspection process for both airframe and electronics through NASA’s Fit2Fly program (PDF).

Dexter is being used in a university for stem cell research, and robotics students at Duke University have recently done the work to use Dexter in conjunction with Robot Operating System. Two of the robots are headed to Lawrence Livermore National Laboratory, although the team is not sure what their role there will be. And back on the manufacturing automation front, Haddington Dynamics is working on a protocol to use the robot arms to build cable harnesses, a dexterous job that is often done by humans and when it is automated the machines are prohibitively expensive.

The future is automation, and Dexter makes that future look like a pretty good tomorrow.