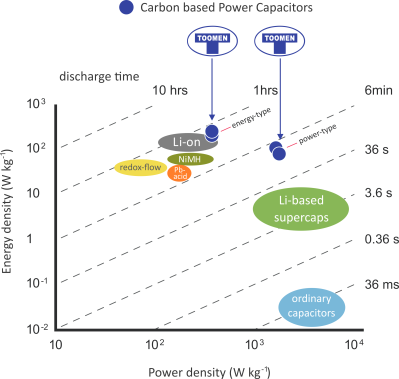 Assuming this all proves out, it seems like the devices would open up a lot of new design possibilities. Designs would no longer need complex charging systems, active thermal management, and would degrade gracefully and safely.

New Atlas has a good write up where they interview the Belgian engineer who saw the Toomen devices at a trade show and after testing them brought them to market with Kurt.energy. According to that article, the capacitor uses a graphene electrode and a metallic oxide material for the other electrode. The energy storage is like that of a capacitor — there is no chemical reaction generating electricity.

The capacitors aren’t in full production yet. There are a few scaling problems with charging at such fast rates, too. According to the New Atlas article, a 10 kWh pack charged in 5 minutes would require a 100 kW charger. However, the new capacitors could have big implications for hybrid cars and solar. We also remember a supercap-powered bicycle that didn’t turn out very well.

With limited production, the price is still somewhat high although that is offset by the simplistic power management system required as well as the lower weight and size of the units. The safety, temperature range, and rapid charging might also tip the balance against traditional components.

Extraordinary claims require extraordinary proof, of course, and we haven’t seen these in real life. We will be interested to see if the components live up to the hype. We’ve seen graphene supercapacitors show up before and it still makes us suspicious. What do you think? Is this the next power revolution or just another wild claim?