Do you remember when trying a new OS meant burning a CD? Not merely downloading an ISO and mounting it on a USB drive, but taking a circle of polycarbonate and hoping you didn’t get a buffer underrun as the file you’d spent an entire day downloading was burned onto it. A couple of decades ago that was how we’d take a look at a new Linux distro, and at the time we considered it to be nothing short of incredible that such a thing was possible. One of the ISOs I remember downloading back then was an early version of ReactOS, a project with the lofty aim of creating an open-source equivalent of Windows NT. You might think that in the nearly two decades since then it would have become an irrelevance and its contributors moved on to other work, but no. ReactOS is very much still with us, and indeed has just seen a new release. Version 0.4.13 is the latest in a long line of incremental updates, and remembering those early ReactOS ISOs when I saw their announcement, I thought I’d give it a spin. The result was both a peek at the current state of the project, and a chance to think about the place of a Windows clone in 2020.

There are two ReactOS ISOs, an installer, and a live CD. I downloaded the former, and first tried to install it on an old Dell Core Duo laptop which it failed to do, before creating an image to install it in a qemu environment. I don’t blame it for not running on the Dell, it doesn’t yet claim to have anything near comprehensive hardware support. The qemu install was faultless though, and I was soon in the ReactOS desktop. I found I needed greater than a 1 GB qemu partition to have space enough for extra software, but it ran happily enough with the gigabyte of memory I allocated to it.

My first impression was that I was back in a Windows PC circa 2003 sporting the grey-and-blue Windows 95-style classic theme, such is their success at creating a clone of Windows from that era. Aside from the ReactOS logo on the start menu it’s indistinguishable from Windows XP with the classic theme, at least as I remember it. Everything is exactly where you’d expect it, and since the version text in the bottom corner states it is reporting as Windows NT 5.3, or 64-bit Windows XP Professional, I’m guessing it has more influence from that OS than Windows 2000. This has been a fully functioning desktop GUI operating system for quite a few generations now, and by the looks of it is a whisker away from its aim of creating that open-source Windows NT clone. Speed-wise its difficult to judge because I had it running in qemu rather than on native hardware, however on my few-year-old i7 running a recent Ubuntu version it was perfectly usable though admittedly a little slow.

Like Windows, But With A Built-In Free Software Repository 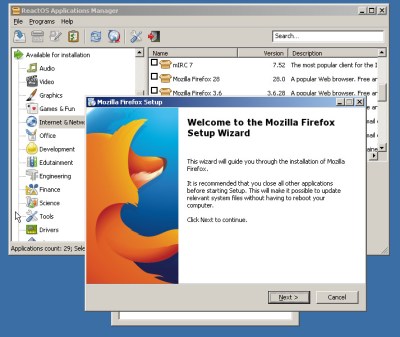 They are at pains to stress that this version is still very much a pre-release alpha, but in navigating round its built-in GUI features and programs you’d be forgiven for thinking it was feature-complete compared to the Windows versions it is most similar to. It doesn’t have much in the way of built-in software, but unlike the “real” Windows of the XP era it comes with a package manager of the type you’d expect with a GNU/Linux distro. This doubles as the Windows “Add/Remove Programs” Control Panel item. There is plenty of choice, so I set to downloading a few programs.

It is in its software support that you are reminded that ReactOS isn’t quite the Windows you are used to. Typically the version of a package in the repository is an older version that works, but any upgrades fail to work. As an example it has Firefox version 48, which when I followed Firefox’s upgrade prompt downloaded version 52.0.3 ESR that installed but completely failed to start. This is likely to have two causes, first that this ReactOS  version may still conceal a few bugs, but perhaps more likely that recent builds of software will expect more recent versions of the Windows API than the XP-like version that ReactOS presents. It’s not all doom and gloom though, because despite hitting it with all sorts of software and seeing many installers and programs crash or simply refuse to run, I never once managed to crash ReactOS itself. I know that Windows XP would have shown me the dreaded Blue Screen Of Death more than once had I tried the same thing, so it appears the ReactOS developers may have achieved a more stable OS than Microsoft did.

Windows Users, Will They Make The Jump? Probably not.

So Reactos 0.4.13 then, for an alpha release a remarkably stable and feature complete clone of Microsoft Windows XP or similar that maybe isn’t quite ready for the Big Time in its software or hardware support. It’s obvious that this is an OS that will get there, so if you need an open-source Windows clone then keep watching. It does beg the question though, just who needs a Windows XP clone in 2020? Probably not me, because while I’d have jumped at it had it been in this state back in 2005, like everyone else I have moved on. Windows users have much newer versions to play with, and I have been an exclusive GNU/Linux user for many years now to the extent that I had to re-learn a few Windows tricks to use ReactOS.

Where I think ReactOS will find a niche then is not as a mass desktop, but for doing what it was designed to do. As what is likely to become a good quality open-source clone of Windows XP it will find a similar role to that of FreeDOS as a supported operating system for older software to run on. If you rely on a piece of software and associated hardware from the XP era you’re going to find ReactOS to be a godsend if it will run it, because you will no longer have to rely on increasingly flaky installs on ancient computers of a platform for which support and security patches ended years ago. If they can ensure where possible that their repository contains software with up-to-date security then they’ll be on to a winner!

57 thoughts on “ReactOS: Dipping A Toe In A Millennium-era Open Source Dream”