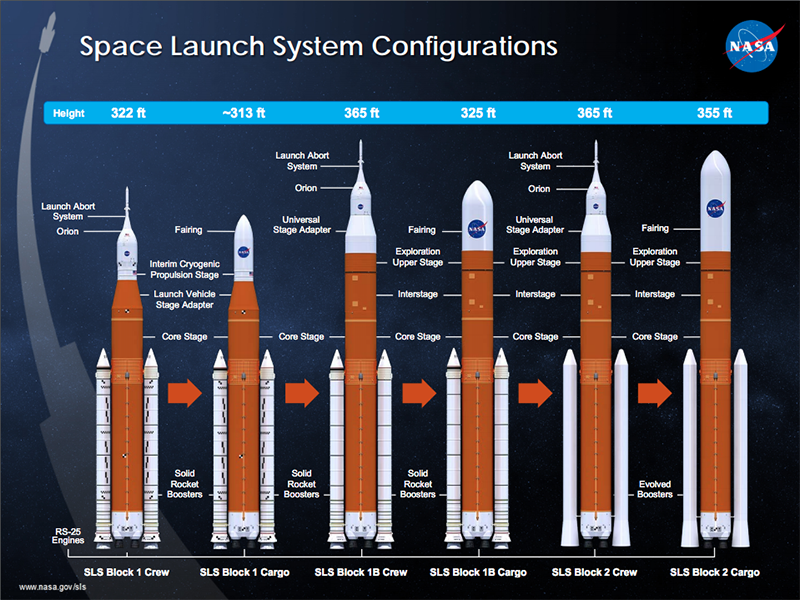 The proposed cuts to NASA for the 2020 budget would defer construction of the Interim Cryogenic Propulsion Stage (ICPS) to focus on the much larger Exploration Upper Stage. The ICPS is a derivative of the upper stage for the Delta III and Delta IV rockets. The Exploration Upper Stage will be significantly bigger, allowing the entire booster to loft 105 tons into Low Earth Orbit, or 37 tons to the moon.

The reasoning that can be gleaned from the proposed NASA budget seems to indicate that cuts to the ICPS are intended to advance the timeline and get the SLS doing what it does best much sooner. While the Block I SLS is more capable than even the Falcon Heavy, it’s still much less than the upgraded Block 1B SLS. The Falcon Heavy is capable of lifting 50 tons to Low Earth Orbit, as is the unflown and untested New Glenn from Blue Origin. Only the Saturn V could carry more to orbit, with a maximum payload to Low Earth Orbit of greater than 140 tons.

The cancellation of the Block 1B of the Space Launch System puts several missions into question. Most notably, the delivery of the European System Providing Refueling, Infrastructure, and Telecommunications (ESPRIT) and the US Utilization Module to LOP-G, This is the launch of a space station to a weird orbit that looks like a highly eccentric polar orbit around the moon. This launch is currently planned for 2024 with Exploration Mission 3, a mission to send four astronauts to the moon to build the Lunar Gateway. Further missions using the Block 1B SLS follow: one to two month missions in 2025 through 2028 will build out the Lunar Gateway, with the crowning achievement of launching four crew to the Lunar Gateway for a mission of more than six months.

The goal of the Space Launch System is to build the machine that will take humans and a lot of payload to the moon and beyond. With the successful launch of the Falcon Heavy, the development of Blue Origin’s New Glenn, and the expected 2020 launch of the Ariane 6, the market for heavy lift launchers is crowded. The proposed budget from the White House still supports building the Lunar Gateway, but says these modules, “would be launched on competitively procured vehicles, complementing crew transport flights on the SLS and Orion.”

Although the White House’s budget does list numerous cuts to space exploration, there is no guarantee this budget will pass; this budget is merely a proposal to Congress which must pass its own budget for the government. The Space Launch System itself is well-supported in Congress and has rightfully been referred to as the Senate Launch System in the past. This is by design, and part of the organizational structure of NASA that dates back to 1958. Whether or not the interim cryogenic propulsion stage will fly on the SLS remains to be seen, but either way we will eventually return to the moon, and most of that payload will be delivered by the Space Launch System.