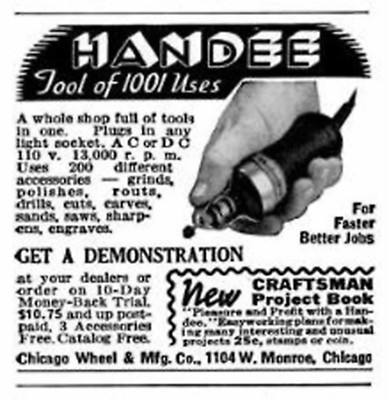 They show up some on sites like eBay, so it would appear they were pretty common in their day. Also, the prices indicate there is an ample supply or — perhaps — not much demand.

Tracking down the origins of a company like this can be tricky. Volume 76 of “Iron and Steel” reports:

The Chicago Wheel & Manufacturing Company…manufacturers of corundum and emery carborundum wheels, etc. advise us that the business of the year 1899 surpassed that of any year since they started business. Mr. Miller recently bought out the interst of Mr. Snider, who had long been associated with him.

So you can surmise that the company had been around since 1898 or probably earlier, depending on their penchant for hyperbole.

However, that little bit gave me something to look up in the “The Book of Chicagoans” from 1911. The Mr. Miller in question was Henry Edward Miller. He became a manager of the Chicago Corundum Wheel Company in 1888. In 1895 he and four partners bought the business and changed the name.

Where Are They Now? 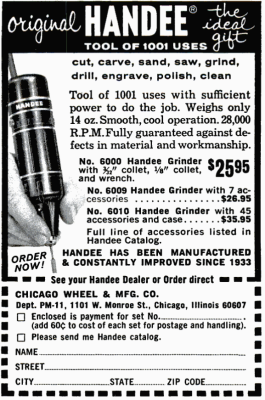 The last reference I can find to the Chicago Wheel and Manufacturing Company is in an article in a 1967 Popular Mechanics. The last ad I can find was in a 1966 edition of the same. The Handee — “the ideal gift” — cost $26 and went up to 28,000 RPM. That ad claimed the tool had been made since 1933. It makes you wonder if Dremel, founded in 1932, had seen their tool or vice versa since they were starting at about the same time.

When you look through old magazines, you have to wonder what happened to all those companies, especially one like this that seemed to be a pretty big concern. You like to think everything is on the Internet, but in this case, there’s very little trail left of this company. Sure, we can point at a few addresses they kept over the years, and trace their ads in a few magazines, but that’s about it.

Did the company get sold? Go out of business? Maybe a Hackaday reader knows the whole story. Or, if you had a Handee, tell us about it in the comments. Meanwhile, if you want to upgrade your cheap Dremel knock off, go ahead. Or build your own, but beware: getting some motors over 12,000 RPM is going to take more than the provided 7.4V.

If this piqued your interest in old school tools, one of the pages that you’ll want to spend some time on is http://www.flamingsteel.com/my-vintage-tool-collection.php. This is where the main image for this article comes from, and is packed with vintage tools going way back.