When [Charles Ouweland] found himself in need of a DIN connector that had a somewhat unusual pin arrangement, he figured he could fashion his own in less time than it would take to have a replacement shipped to him. In the end it sounds as though it took a lot longer than expected, but given the worldwide situation, we don’t doubt this bespoke connector was still put to work before its eBay counterpart would have arrived. 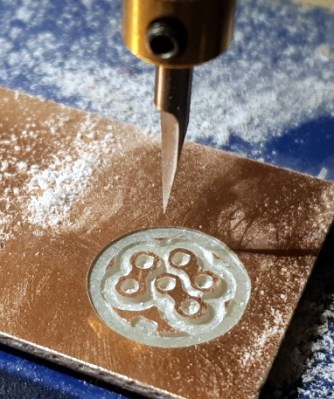 More importantly, the connector [Charles] produced looks fantastic. If we weren’t told otherwise, we’d have assumed the finished product was commercially produced. Although to be fair, he did have a little help there. The housing and pins themselves were pulled from a sacrificial connector; his primary contribution was the insulating block that holds the pins in their proper position.

So how did he make it? He had considered using a piece of scrap material and just putting the holes in it with a drill press, but he was worried getting the aliment right. Instead, he decided to call his cheap CNC router into service. By routing his design out of copper clad PCB, he was even able to tie the appropriate pins together right in the connector.

Admittedly, we don’t see a lot of hardware that still uses DIN connectors these days. But this tip is certainly worth filing away just in case. You never know when you might find an old piece of hardware that just needs a little TLC to get up and running again. Who knows, you might even find a dumpster full of them.