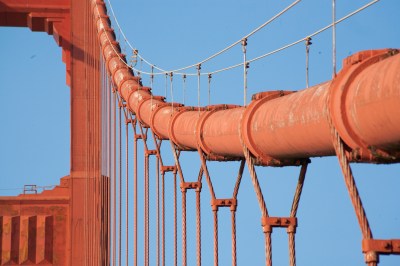 A suspension bridge is meant to support its own weight and the weight of all the automobile and pedestrian traffic that it carries. The road deck is supported by vertical suspenders, which hang down from the swooping suspension cables. These suspension cables, loaded entirely in tension, transfer their weight into the towers (of which there are typically two), acting in compression and sending the force into the ground.

Suspension bridges are very efficient in resisting those gravitational forces, but like all other above-ground structures, they must also resist the horizontal forces applied on them when the wind blows or the ground shakes. When the wind blows perpendicular to a bridge’s span, the road deck has a tendency to sway like a clothesline in the breeze. In extreme cases — most notably in the 1940 collapse of the Tacoma Narrows Bridge — the rocking of the road deck in the wind can start a feedback loop that eventually causes the bridge to twist itself apart. (With the Tacoma Narrows collapse in mind, The Golden Gate Bridge was reinforced in the 1950s with a series of trusses to help provide additional torsional rigidity.)

Resisting the Wind (and Dodging It)

While the Golden Gate Bridge has safely resisted eight decades of winds whipping from the west into San Francisco Bay, engineers were still concerned about the long term viability of the bridge’s lateral system. The District’s public affairs manager, Paolo Cosulich-Schwartz indicated that the bridge is currently safe for winds of about 68 miles per hour, but the area can sometimes experience gales that exceed 100 miles per hour. Therefore, any reduction in drag or exposed transverse surface area would be beneficial to the bridge’s lateral system.

Replacing the original, chunky pedestrian railing with something more svelte was a relatively simple way of reducing the surface area exposed to wind. The work could be completed at the level of the road, without temporary scaffolding, and without even disrupting the majority of the bridge’s traffic. Even this seemingly minor modification, when extrapolated across the length of the bridge, would have significant structural benefits: The new railing decreases the exposed surface area by thousands of square feet, meaning a likely reduction of hundreds of thousands of pounds of lateral wind loading.

However, the design of the new railing had more than just aerodynamic considerations. Cosulich-Schwartz explained, “When bridge engineers designed the original railing, they wanted pedestrians to feel secure, but they also wanted motorists to take in the majestic views of the ocean to the west and the city of San Francisco to the east. So they came up with this slatted design that is solid, but when you’re driving by at speed, they appear to be transparent.” The new railing had to meet the functional and aesthetic requirements of the original design, while still reducing the surface area.

Prior to construction, The District performed a wind tunnel analysis of the new road deck, including the modification to the westmost railing (visible in the Golden Gate Bridge District’s wind tunnel testing video, on the left at the roughly 2:53 mark). However, the one twentieth scale test did not provide sufficiently fine-grained results to predict that the railing would shriek in high winds. “In our study and analysis, it was revealed that there would be some sound, but at no point was it shown that we would hear the level and degree of sound that we heard on June 5th,” relayed Cosulich-Schwartz.

That sound you may have heard:

The Golden Gate is whistling. 💨pic.twitter.com/ItOMTm8Z08

The District is well aware of the public response to the bridge’s new vocal stylings. Regarding their plans for addressing the issue, Cosulich-Schwartz disclosed, “We’re doing more analysis and engaging experts in the field to better examine precisely and under what conditions the sound can be expected to occur. And we’ll also be investigating any mitigation efforts to address the sound.” The District may even conduct another round of wind tunnel testing with a full-scale segment of railing, which could then lead to an in-situ remediation program. A retrofit of the retrofit.

The installation of the west side railing is already about 75% complete as of this writing, and The District has no plans to turn back. In addition to the railing work, the District is working to give the bridge a more aerodynamic profile by installing a new quarter-circular fairing at the base of the western sidewalk. Similar to the one installed on the Whitestone Bridge in 2003, the fairing would reduce the wind load on the bridge by covering exposed flat surfaces and streamlining the bridge deck’s wind-facing side. So if the Golden Gate Bridge develops a bellowing baritone voice in the coming weeks, you already know why.

Even with state-of-the art design methods, our biggest structures sometimes surprise us once they’re complete. None of the facade consultants at London’s 20 Fenchurch tower predicted that it would be melting cars on the streets below. And in spite of thorough wind tunnel testing, skyscrapers still produce deafening tones of their own. The engineering team behind the Golden Gate Bridge’s retrofit seems to have exercised due diligence, but sometimes the difference between plans and reality can be heard loud and clear.

28 thoughts on “Bridge Over Trebled Water: How The Golden Gate Bridge Started To Sing”