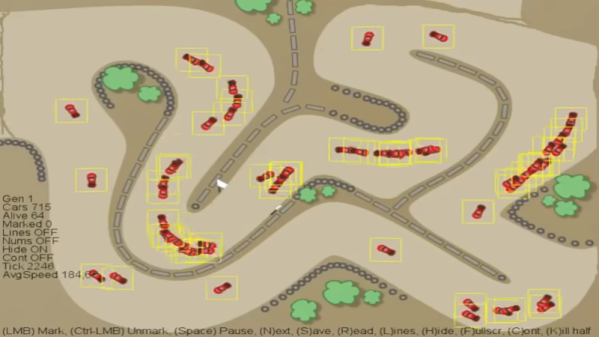 Often, when we think of getting a computer to complete a task, we contemplate creating complex algorithms that take in the relevant inputs and produce the desired behaviour. For some tasks, like navigating a car down a road, the sheer multitude of input data and its relationship to the desired output is so complex that it becomes near-impossible to code a solution. In these cases, it can make more sense to create a neural network and train the computer to do the job, as one would a human. On a more basic level, [Gigante] did just that, teaching a neural network to play a basic driving game with a genetic algorithm.

The game consists of a basic top-down 2D driving game. The AI is given the distance to the edge of the track along five lines at different angles projected from the front of the vehicle. The AI also knows its speed and direction. Given these 7 numbers, it calculates the outputs for steering, braking and acceleration to drive the car.

To train the AI, [Gigante] started with 650 AIs, and picked the best performer, which just barely managed to navigate the first two corners. Marking this AI as the parent of the next generation, the AIs were iterated with random mutations. Each generation showed some improvement, with [Gigante] picking the best performers each time to parent the next generation. Within just four iterations, some of the cars are able to complete a full lap. With enough training, the cars are able to complete the course at great speed without hitting the walls at all.

It’s a great example of machine learning and the use of genetic algorithms to improve fitness over time. [Gigante] points out that there’s no need for a human in the loop either, if the software is coded to self-measure the fitness of each generation. We’ve seen similar techniques used to play Mario, too. Video after the break.

END_OF_DOCUMENT_TOKEN_TO_BE_REPLACED 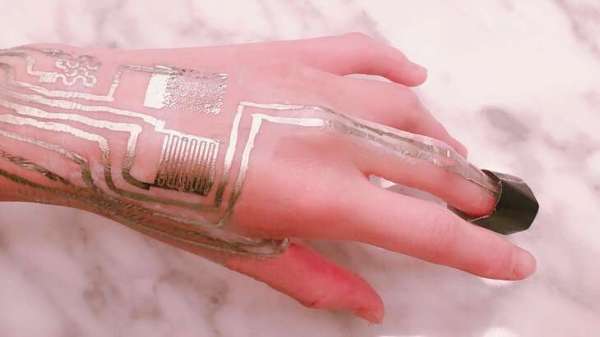 An international team at Penn State led by [Larry Cheng] made a breakthrough in printing sensors directly on skin without heat. The breakthrough here is the development of a room-temperature sintering technique. Typical sintering of copper happens at 300 C, and can be further lowered to 100 C by adding nanoparticles. But even 100 C is too hot, since skin starts to burn at around 40 C.

You can obtain their journal article if you want the details, but basically their technique combines the ingredients in peelable face masks and eggshells. With this printed circuit is applied to the skin, the sintering process only requires a hair dryer on the cool setting, and results can bend and fold without breaking the connections. A hot shower will remove the circuit without damaging the circuit or your skin. [Larry] says the circuits can be recycled.

They are using these sensors to monitor temperature, humidity, blood oxygen levels, and heart performance indicators. They’ve even linked these various on-body sensors with a WiFi network for ease of monitoring. After reading this report, we’re left wondering, if the sensor is directly on your skin, can it be really called wearable?

We’ve written about printable inks before, but for printed circuit board applications.  We can’t help but wonder if this technology would help solve some problems inherent in that technology, as well. Thanks to [Qes] for the tip.